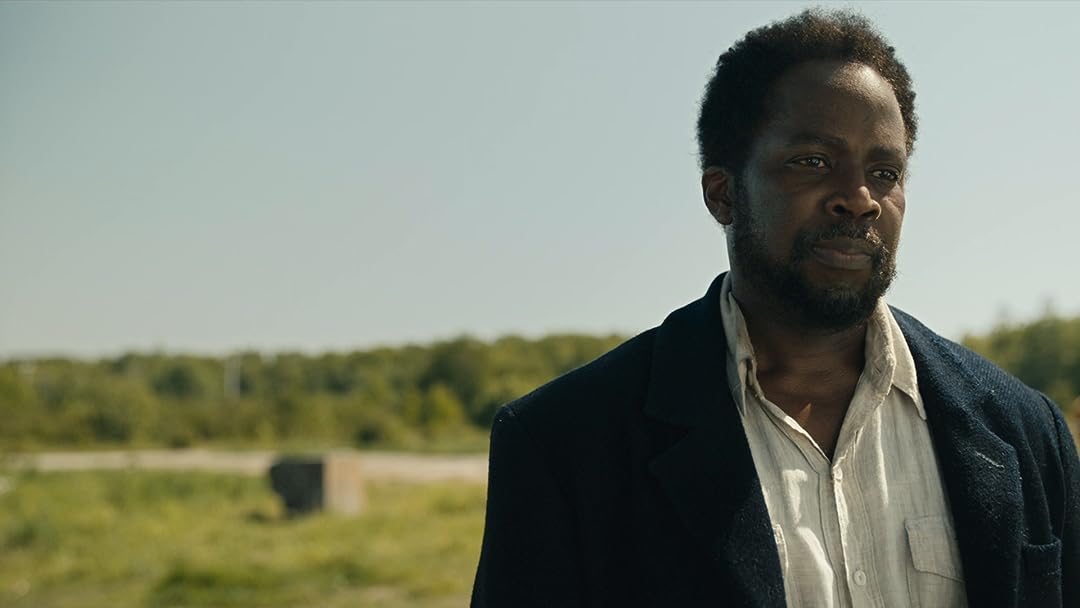 Season 1
(326)
7.62022X-RayTV-MA
FROM unravels the mystery of a nightmarish town that traps all those who enter.

MommaMiaReviewed in the United States on February 20, 2022
5.0 out of 5 stars
This one grabs hold and doesn't let go!
I was considering what to watch this morning and I noticed an advertisement for his new show, watched the trailer and thought I'd give it a try. I have to say that of all the shows I've recently seen, this one grabbed a hold of me and had my attention from the very beginning. I am impressed with the acting and the character development thus far. I've watched two episodes so far and am so looking forward to further installments.

I can't imagine what it would feel like to find yourself driving in a straight line, yet going in a circle. The panic and agitation was palpable and I was so impressed with how the actors handled their roles. A family traveling in their RV finds themselves stuck in a place that seems suspended in time and certainly a bit off. The natives aren't that friendly. Something isn't right, but we don't know exactly what. The suspense is fantastic and I'm really excited about this series. I hope you will give it a try.

VinnyReviewed in the United States on February 22, 2022
5.0 out of 5 stars
NOT Simply a Horror Show; Rather: Sci-Fi, Supernatural, Drama, Mystery, Horror
I am not a big fan of horror shows (although I will admit that I LOVED the NOS4A2 series, which does belong to the Horror/ Supernatural genres...), and thus, since Amazon and most other services and venues had labeled the genre of this series merely as "Suspense/ Horror/ Drama" I almost passed it over and almost decided not to check it out. However, at the last moment, I got a gut sense telling me that this show was, in reality, far broader than a mere horror series, and I decided to check it out, and I ended up watching all three episodes that have been released so far.

I do not give 5-star ratings to shows very often, but so far, I must admit that this show is 5 stars all the way! Looking forward to seeing more episodes ASAP!

So, I can tell you that this show turned out to be 5 stars all the way so far! And, much as my gut sense had predicted, this is not a mere horror or "slash-em" show, but rather the genres in which it definitely fits are each of the following: Sci-Fi/ Fantasy/ Supernatural/ Drama/ Mystery/ Horror.

The series is very well-written, very well-acted, and everything about the production so far is very high quality.

UPDATE, as of March 5, 2022: Here is a brief update, in early March 2022, now that I have watched the fourth episode as well. I still continue to really enjoy the show, but I will readily admit that unless the plot and story get a lot more concrete and down-to-earth really soon, such as within the next two episodes, there will be so many major as-yet-completely-unaddressed questions that will still remain open-ended that the story will quickly devolve into one that is completely unbelievable, ridiculous, and amateurish.

Perhaps the primary as-yet-not-at-all-addressed issues that are still outstanding as of the end of episode #4 are each of the following clusters of related questions, although I am sure that come eagle-eyed reviewers would be easily able to come up with at least four or five more such clusters of MAJOR glaringly-unaddressed but-yet-begging-to-be-answered issues:

1) WHY do all the buildings -- and even the street lamps -- still have uninterrupted and apparently totally-reliable AC utility electrical power (note: the flickering on and off of the jukeboxes in the diner is a separate issue from the reliability of the AC power; the jukebox activity "flickering" is independent of the AC power for the lights and other AC-powered equipment)? Where does this power come from? Why has no one to date investigated where the AC electric power is coming from?

2) Where do the food supplies come from? Sure, there have been vague mentions that both cows and chickens mysteriously appear at times, but where are they then raised until slaughter, and where are the egg-laying chickens raised? Where are the crops, including grains, that are used to feed the cows and chickens grown? Where are they milled? And where do so-called staple foods such as sugar, maple syrup, flour, milk and at least two dozen other "staples", come from? Where do the breakfast sausage links and the bacon served in the diner come from?

3) The entire matter of the talismans has not yet been addressed. Some as-yet-unaddressed questions are: Where did the sheriff find the talismans, and how many did he find? Why has no one yet investigated how the talismans may work? Has anyone tried to figure out who made the talismans?

4) All of the buildings seem to have running clean potable water. Where does this water for sinks, showers and toilets, used for cooking, drinking and bathing, come from?

How the show handles these open questions over the next one or two episodes will determine if the show remains a 5-star story, or whether it devolves into a 1-star travesty!
37 people found this helpful

PazzyReviewed in the United States on February 27, 2022
1.0 out of 5 stars
RIPPED OF STRAIGHT "FROM" 'Wayward Pines
EDITED MAY 22:
I just paid $1 to see the rest of the 7 episodes of "FROM" and it was a waste of my time and $1... Such a POINTLESS SHOW THAT WENT NOWHERE! I CANT UNDERSTAND HOW ANYONE CAN GIVE THIS A 5*! BESIDES NO REAL STORYLINE, the writers gave EVERY character, except the little boy, a filthy mouth of f---K words that were used as a pronoun-noun-adverb-verb-adjective AND any other way they could put the word in any characters mouth multiple ways in the same sentences, along with many other unnecessary vulgar and useless words.

I don't know who to fault- the producers, or the writers, OR the directors (it was a waste of some actors talents).. With the material there it could've been better, but all I can add to my previous review is there was just MORE of the same of NOTHING and people going in circles getting NOWHERE.
Audiences should expect more substance than this, I know I do!

*****
Epix FROM is a COMPLETE RIP OFF (SO FAR) OF M. NIGHT SHYMALAN;S WAYWARD PINES SERIES 2015 ..I just got through watching the first 3 episodes of FROM and I couldn't quite place that very familiar feeling UNTIL the last scene in episode 3 - when the creature (looked JUST like the ones from WP) attacked the man in cage.

(SPOILERS) ...In FROM, ppl have a vehicle accident - after mysteriously not being able to leave town, - then deal with a sheriff with attitude -then have a house basically picked for them- that someone was just 'killed' in-, and had someone put in the center of town -to be be made a example of breaking the rules.- . oh wait.. THATS EXACTLY WHAT HAPPENED IN WAYWARD PINES!!! (even for the few seconds at the end of episode 3 at the last scene the creature was basically identical to the one in WP).

I liked Harold Perrinau in LOST and in other movies he's done since them but this series was done VERY well before. The writer and Director miss the mark making it seem like every teen girl is a bully to their brother and when given a stressful scary choice she wouldnt WANT to be in the same place with her family who DO love her!

The talismans are joke as so far (3 episodes in) NO one even knows WHY thats the ONLY things that really works as said by the sheriff to the newcomers; AND they stretched the jerk thinking it was a reality tv prank out wayyyy to far. I still dont know WHY NOT one person couldnt extend a simple smile or hello to the family in the RV know what was coming, given the fact they knew what was going to happen -as in treating others how you want to be treated!

AS much as I might've tried to like this had I not watched WP, I might watch some more and see what happens but I cannot give more than 1 star based on this series right now and do NOT recommend FROM.
37 people found this helpful

Melissa McVicarReviewed in the United States on February 22, 2022
5.0 out of 5 stars
Haven't done a show review ever!
This is the first show I've watched and been so enthralled, I felt the need to tell others by way of a review.
The acting is great and the only annoyance I found was the new guy who relentlessly felt it was all a rouse for just him. At first it was entertaining, but halfway thru episode 3, I wanted to slap him across his face. I really hope they either kill him off soon, or develop his character into a humble, completely new apologetic, sympathetic outlook on life as a whole kinda guy. The type of person you become when you an enormous life altering event happen to you, making you realize how insignificant money and fame truly are.

Other than that little spurt, even the kids aren't as annoying as they've been in recent shows and movies coming out I've seen. I cannot wait for the next episodes. If you like a good suspense, with a dusting of horror and gore, this show is a must watch!
25 people found this helpful

Wendy H.Reviewed in the United States on February 28, 2022
1.0 out of 5 stars
Bait and trap! Disgusting what Amazon is doing.
This is an awesome series so far! However, unless you are already subscribed to Epix, don't watch. Amazon gives you three episodes "Free". Then you will need to subscribe to and pay for another app if you want to keep watching. I would give this a negative star for Amazon if it were an option. I will give 5 stars for the show.
23 people found this helpful

John MReviewed in the United States on February 21, 2022
5.0 out of 5 stars
Riveting new series!
This new original series grabbed my attention from the very start! Watched the first 3 episodes at once and can’t wait for the next episode to be released!
21 people found this helpful

Mark EubankReviewed in the United States on February 22, 2022
5.0 out of 5 stars
So far so good
Only 3 episodes in but it's holding my attention. It hasn't devolved into 'stupid' like most series but it's still early.

There's a sampling of Salem's lot as well as King's The Dome in the story. No way out with creatures that must be invited in to do you harm.

What sets it apart is the acting. Some of it is downright great. For example the actor who plays the women running the community house. She's played very well. A hardened old trucker type of women. The scene where she describes her sister's death is told so well it was chilling. This level of acting is found throughout the 3 episodes.

The weakest storyline thus far is the Movie producer guy who arrived stoned out of his gills. He's not buying the trapped in town monster story and think the whole thing is an elaborate joke done by his friend tobey. This flew at first but it's carried for far too long. No one can be that dumb--and let's hope the writers don't turn out the same.
17 people found this helpful
See all reviews
Back to top
Get to Know Us
Make Money with Us
Amazon Payment Products
Let Us Help You
EnglishChoose a language for shopping. United StatesChoose a country/region for shopping.
© 1996-2022, Amazon.com, Inc. or its affiliates