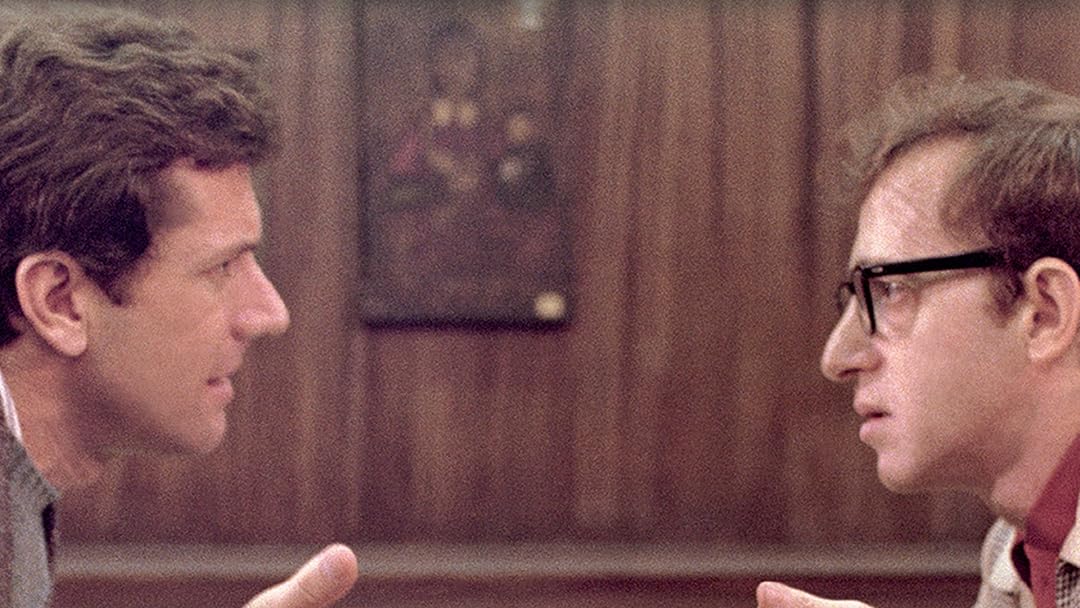 (208)1 h 34 min1976PG
Woody Allen plays a bookmaker who become "a front" for a group of blacklisted Hollywood screenwriters who aren't able to get a job, because of their alleged communist ties. The Front was written by blacklisted Walter Bernstein and features performances from several blacklisted entertainers, including Herschel Bernardi, Joshua Shelley, Lloyd Gough, and Zero Mostel.

Jeffrey HopeReviewed in the United States on June 14, 2020
5.0 out of 5 stars
Humor, sarcasm, and contempt are wonderful ways to defeat human degradation.
Verified purchase
Senator Joe McCarthy was a fairly ignorant human being and a reckless demagogue who unfortunately was allowed by our government to prey upon the fears of the general public -- fears that were contrived by propaganda and that were connected with the cold war with the Soviet Union -- for political gain in the early 1950s. The fact that this nut had inspired national witch-hunts, including the Hollywood blacklisting depicted in this film, that destroyed the careers and ruined the lives of countless number of decent people -- who had no ambition to overthrow the political system -- only leads me to think that perhaps the political system needed to be overthrown. The attorney who was the mastermind behind these political campaigns of fear was no other than Roy Cohn -- the same man who years later turned out to be the central mentor in the life of our current President, Donald Trump. It appears we really haven't learned a whole lot from those days. We are still living in rather scary times, perhaps even more so, except that the national witch-hunts that are happening today are done very very quietly with the use of much more than one surveillance agent per person of interest. An entire undercover surveillance system comprised by hundreds of thousands of ground patrol, various spy aircraft, possibly the use of satellite, store monitors that now can be seen from a smart phone, and of course the surveillance of all tele-communication and online actvities both domestic and abroad are now in full operation that began just around the time that large defense contracts to support the war in the Middle East was ending. Imagine that.

As for the movie, "The Front", I do not recall ever seeing or even hearing about this film in the past forty-four years -- which only makes me wonder to what extent the powers that be kept this film under the mainstream radar. It is hard for me to imagine that Woody Allen did not have a hand in the writing of the script; everything about the film feels like a Woody Allen film. Even though some of the jokes came off like a Henny Youngman
monologue, the film effectively and skillfully used humor to highlight an important and ugly era in U.S. history. "The Front" is still relevant today because, at it's core, what the film really does -- in a light and intelligent way -- is to question the humanity of political force that is pressed down upon individual citizens by its own government through fear and manipulation, and we desperately need to learn from that.

joel wingReviewed in the United States on November 26, 2020
4.0 out of 5 stars
Woody Allen faces the Red Scare and the govt blacklist
Verified purchase
The Front is a Woody Allen comedy based upon the Cold War and Red Scare in America. The film begins with Allen as Howard Prince and his friend Alfred Miller (Michael Murphy) telling him he’s been blacklisted for being a Communist sympathizer and he can’t get any work as a writer in the entertainment industry. He asks for Prince to be his front, hence the name.

You would expect an Allen movie to be a comedy but this is actually a drama. Yes, Allen gets to make some wise cracks and small jokes but it’s all about commenting upon the Red Scare. It shows how people’s careers were destroyed. How people were asked to spy upon others. How simple association could get people in trouble, etc.

It’s a good dramatization of the issue with the director, writer, and many of the actors having been blacklisted in real life.
C
5 people found this helpful

annie_rReviewed in the United States on June 26, 2020
5.0 out of 5 stars
Communist-bashing is back big time
Verified purchase
I have usually enjoyed Woody Allen movies but this is new for me. He gives us a straight take on this role as an everyman with a twist. The era depicted is one that was held up to shame until just recently when suddenly communism returns as a dire threat against our consciousness and stability. People are once again hesitant to defend Putin or Xi as good moral leaders in the face of propaganda to the contrary. The reference to the Rosenbergs is especially telling. This an important movie. These networks that want war are newly awakened and dangerously afoot.

It is interesting that one reviewer seems to think that Trump is behind the dictator drive in this country. Actually the constant references to socialism and communism come from both parties. The drive toward war with China is tainted with propaganda against a nation that has consistently challenged corruption in its government; China has consistently raised the standard of living for its population; China has had good effects on its allies in aiding development. It is Trump who wants peace and trade with Asia. His constant battles with intelligence agencies and his own staff indicate that he needs the support of Republicans at least through the election. He has avoided a new war several times even though he claims to be tough on communism. All the evidence indicates that surveillance has been used against him rather than by him.

I wish that the lessons of this movie did not apply, but the drive toward nuclear war is stronger than ever before. We need a strong and sane dialogue with other nations. There are people who are attempting that through Trump's personal relations with Putin, Xi and Modi. We can hope.
5 people found this helpful

Elisa 20Reviewed in the United States on November 13, 2017
5.0 out of 5 stars
Timeless
Verified purchase
An excellent script about an important time in our history that is still relevant today. My favorite Woody Allen performance. Allen, Mostel and the plot gives it entertaining elements at the same time the dramatic points are being made. There's added poignancy with the involvement of so many who really -were- blacklisted, writer Walter Bernstein, director Martin Ritt, actors Mostel, Lollyd Gough, and Herschell Bernardi. I wasn't expecting that ending, but it was a great choice. Let's hope we learned something from that period of our country. These people eventually were able to work again but many great talents weren't, their careers ended by an ideological hysteria that should have been repudiated from the beginning as a violation of our Constitution. A great film.
11 people found this helpful

TRReviewed in the United States on September 16, 2020
5.0 out of 5 stars
Woody Allen plays it straight for serious subject
Verified purchase
Woody paid homage to the blacklisted artists, writers, actors during a very dark period in American history in this understated film.

The movie is loaded with some of those previously blacklisted artists, including the director and screenwriter.

The highly gifted Zero Mostel, larger than life, bestows a heartbreaking performance as a character based on his friend, multi-talented Philip Loeb, who took a permanent stage left in reaction to being hamstrung by the HUAC.

The storytelling is not overly dramatized yet the final empowering scene reminds us to speak truth to (false) power.
4 people found this helpful

Clarke DunhamReviewed in the United States on January 12, 2020
5.0 out of 5 stars
A humorus look at one of our national tragedys.
Verified purchase
The 1950s were one our nation's most tragic periods if you were in the entertainment business. Many talented people's careers were ruined (and worse) by the House and Senate Un-American Activities Committees, but many found creative ways to fight back. This film doesn't gloss anything over, while finding a way to fight back with humor. Lots of it. Great cast all around.
5 people found this helpful

R. BittonReviewed in the United States on July 30, 2020
1.0 out of 5 stars
WRONG MESSAGE
Verified purchase
The message in this movie is that Communism is all right, and that US communists should not have been black-listed. This is so wrong; The black listing was Justified. As a Capitalist Democracy, US Should protect itself from it's own Communist citizens, seeking to destroy our free and successful way of life, and replace is with a totalitarian regime and a proven failure economic system. Sometimes the enemy is inside our own society, like in this case.
3 people found this helpful

David E. BaldwinReviewed in the United States on January 3, 2016
5.0 out of 5 stars
Woody Allen Shines in a Dramatic Vein
Verified purchase
I think the best compliment that can be paid to director Martin Ritt's forty year old film about the blacklist that persisted in the entertainment industry in the Fifties is that the message still resonates today. Consider the rhetoric and hyperbole that is being bandied about regarding the terror threat from radical Islam not making distinctions with peaceful and hostile Muslims. Soviet communism was a legitimate threat in our postwar environment but not the brand associated with artistic types of the time. We find ourselves vilifying each other over membership in a mainstream political party which is a danger unto itself. Enough soapbox. The selling points of this film is the turn by Woody Allen playing a sad sack who experiences riches and fame fronting for blacklisted scriptwriters whose character evolves when he discovers the dangers of redbaiting. Allen's casting is a stroke of genius and he expertly blurs the line between comic and dramatic. Equally fine is Zero Mostel as an entertainer whose misguided dalliance with an attractive Communist years before leading to his professional ruination. Mostel wrings all the pathos from the character that you'll find yourself laughing between the tears. Standout scene is one where Mostel angrily confronts a Catskills resort owner for paying him peanuts for a gig he once commanded top dollar for. I love Ritt's ironic use of Frank Sinatra's "Young at Heart" as documentary footage of families piling into bomb shelters and disabled returning vets is shown over the opening credits. This film is essential to understanding an unfortunate chapter in our history.
6 people found this helpful
See all reviews
Back to top
Get to Know Us
Make Money with Us
Amazon Payment Products
Let Us Help You
EnglishChoose a language for shopping. United StatesChoose a country/region for shopping.
© 1996-2021, Amazon.com, Inc. or its affiliates