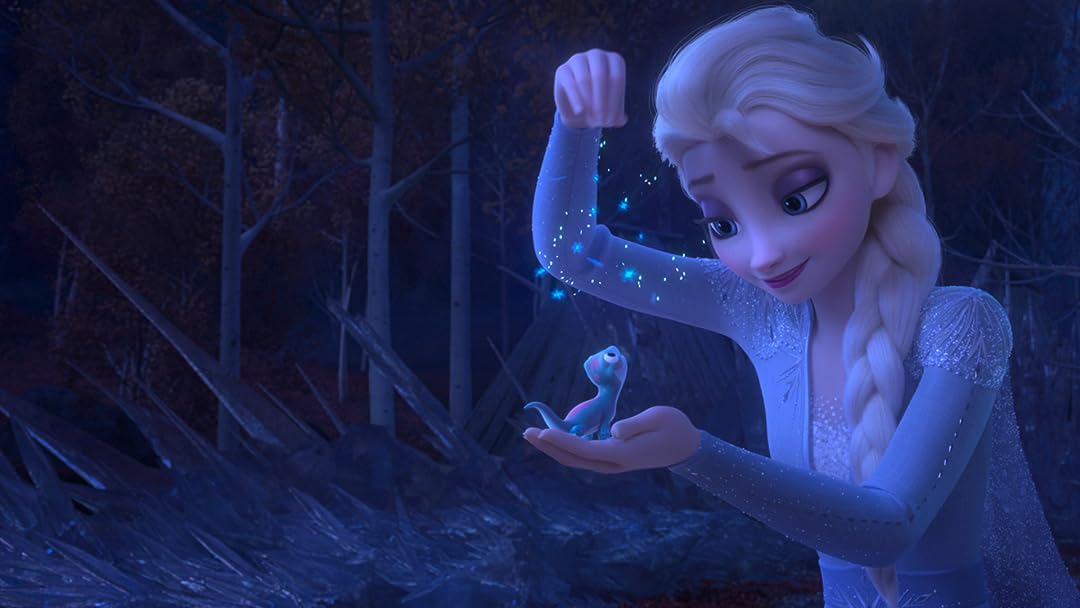 (80,034)
6.81 h 43 min2019X-RayHDRUHDPG
Together with Anna, Kristoff, Olaf and Sven, Elsa faces a dangerous but remarkable journey into the unknown—to the enchanted forests and dark seas beyond Arendelle, in search of truths about the past.

jwwReviewed in the United States on November 23, 2019
4.0 out of 5 stars
Great looking fantasy film
I enjoyed myself with this one.

First off, this is one of the BEST looking animated movies of all time. It is simply gorgeous looking. The visuals have an excellent use of color and nature. I love that they decided to set this in autumn, which is something you don't often see in animated films. In contrast to the more traditional fairy tale look of the last film, this one is far grander looking. The appearance of the kingdom of Arendelle in this makes the original look so-so.

Frozen II feels so different from any other Disney animated film. There are plenty of those that do fantasy, but this is the first one (except maybe for The Black Cauldron) to go for EPIC fantasy. I really loved the various legitimately challenging magical forces the characters have to deal with.

The story looks into how Elsa (voiced by Idina Menzel) has her powers and I really liked the setup and the messages they were trying to tell. This is actually one of the more serious Disney animated films. (By their standards. Don't worry there's still plenty for your kids to love.) There are a couple surprisingly dark, dramatic moments. (Again, by Disney standards.)

Based on the trailers, I was afraid that comic relief Olaf the snowman (voiced by Josh Gad) wouldn't fit into the change of tone on account of being too light, but the writers adapted the character really well. They have him growing up and being far more philosophical about the world (while still being pure). His musings often steal the show. I actually thought he was funnier in this than the last film.

I did think this movie had some pacing issues. The plot just isn't as tight as the first one. There are moments where the writer didn't know how to best utilize the main characters. I do wish they spent more time interacting with a couple of the film's likable but underused new supporting characters.

Songs are decent but aren't on the same tier as the last film. Half are just okay. The song Into the Unknown tries too hard to be the new Let it Go. Still, I give the songwriters credit for going with a new style not found in previous Disney films. I liked Show Yourself, Lost in the Woods, and All is Found. The last one is a particularly lovely piece.

This isn't quite as good as the original, which knew more what it wanted to be and had a stronger emotional backbone. Still, this has a lot going for it and I think your kids will like it.

UniqueMonikerReviewed in the United States on February 15, 2020
1.0 out of 5 stars
All the content is one long video - no menus at all
Verified purchase
There is no selection for the bonus features, you just have to fast forward and hope to get where you want. I was expecting some sort of DVD'esque menu selection where I can pick the movie, the sing along movie, the bonus songs, etc.

But it's a 5 hour long single stream with everything back to back to back. Good luck finding what you want in it. Will be submitting for a refund and waiting for the BluRay to come out
68 people found this helpful

Jasper HarrisonReviewed in the United States on February 13, 2020
1.0 out of 5 stars
Most likely NOT 4k / NO BONUS CONTENT
Verified purchase
What I mean by "most likely" is that I'm pretty sure its not quite 4k. I have a 4k samsung tv with a ZOTAC GeForce RTX™ 2070 SUPER powering it and high speed internet but it still looks like it falls sort. Now to compare I played the first frozen movie that I also bought off amazon but in HD and it immediately looked better the the 4k frozen 2. I should also point out that both of the movie played at "best 6.84 GB per hour" which technically should be enough for 4k to stream. I then looked at the comments of both the 4k version of frozen 2 and the original HD frozen 2 and they have the same exact reviews on both which led me to believe they are one and the same :/ I really like this movie and I wanted to buy it with the bonus content and seeing that just the movie itself cost the same as the bonus content one, well its a no brainier to buy the one with bonus content. Buuuuuut when I saw that they had a 4k version I had to have it IF it had the bonus content but no matter where I looked it didnt say if it did or not. So I took a gamble and bought the 4k version. Now Im barely running HD and NO BONUS CONTENT. EDIT: OK for the sake of being 99% sure I went and bought the HD version of frozen 2 WITH the bonus content and yea they are both playing HD. Unless Im doing something wrong playing the 4k version I would recommend no one to buy this one and wait for the blu ray which comes out the 25th or just buy the HD version. Now amazon I understand your terms for buying movie on your site but if you would be so kind to reach out to me and give me a refund for the 4k version ( so I wont have two of the same movies) that'll be great. Btw the movie is AMAZING! Im only giving the 1 star because of wrong advertising. The movie itself is a easy 5 stars in my opinion :)
68 people found this helpful

Melissa C.Reviewed in the United States on February 12, 2020
2.0 out of 5 stars
Awful
Verified purchase
I don't know what they were thinking with this. The music was awful, but the animation was pretty awesome! The animation is the only reason this got 2 stars from me. The plot was predictable and felt contrived. Next time don't produce a movie unless you have a real story to tell with some decent song writing, there were way too many crappy songs in this. Not a single song was memorable and other than a fun Disney themed ride at the amusement parks I see no value to this movie. The myths/lore behind the plot were kinda interesting.
54 people found this helpful

LeRoy E. AshReviewed in the United States on November 23, 2019
5.0 out of 5 stars
Fantastic far better than the first one
Much more intense than part one, much more in depth and more emotional impact adults will love this one as much if not more than the kids
95 people found this helpful

Alicia M.Reviewed in the United States on February 11, 2020
2.0 out of 5 stars
Issues with the bonus content
Verified purchase
I love this movie it is amazing but I am really disappointed with the quality of the movie provided by amazon prime. There were several instances in the bonus content where the sound went completely mute and then resumed afterwards. I wish I had bought it on another platform.
38 people found this helpful

HeatherReviewed in the United States on February 16, 2020
1.0 out of 5 stars
I would like to un-watch this movie.
Verified purchase
They could have went a completely different direction with this movie. Instead everything about it is overtly filled with witch-craft. The use of the "elements" or spirits as they sometimes refer to them. It is just sad what they are attempting to fill children's heads with. If you are a professing Christian & understand what the Bible states about witch craft etc...I would suggest steering clear of this movie & perhaps most "kids movies" these days.
27 people found this helpful

m_badesReviewed in the United States on November 23, 2019
5.0 out of 5 stars
Chill inspiring movie
I saw the movie in the theater and I got chills. the character development is perfect and I recommend seeing this for anyone who likes independent women stories. Disney has outdone themselves in more way then one.
76 people found this helpful
See all reviews
Back to top
Get to Know Us
Make Money with Us
Amazon Payment Products
Let Us Help You
EnglishChoose a language for shopping. United StatesChoose a country/region for shopping.
© 1996-2022, Amazon.com, Inc. or its affiliates