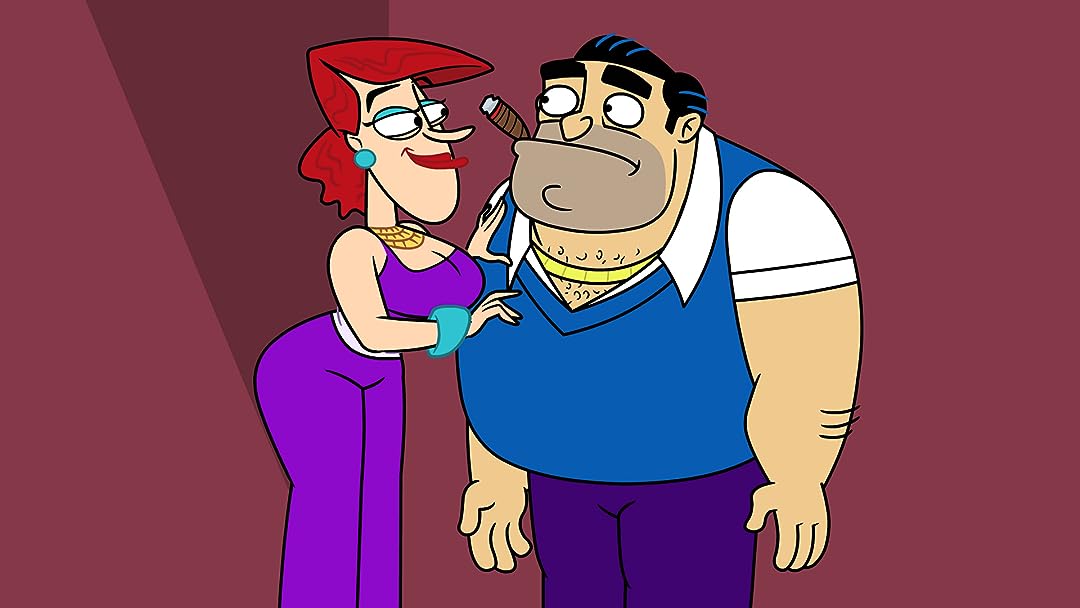 (59)
6.12012TV-MA
A hilarious, edgy and outrageous animated sitcom about the misadventures of Jimmy Falcone, a former New York mob boss, and his family who must enter a witness protection program in small-town Canada. The Falcones are now the "MacDougals" and itâ€™s not easy going from glorified gangsters to neighborhood nobodies. Itâ€™s a fish out of water story, except these fish are sharks!

JLSanzReviewed in the United States on December 9, 2019
5.0 out of 5 stars
Great to watch. Funny
Verified purchase
Love this show. Ive watched several times. Not for kids
5 people found this helpful

TiaTt thefatstarvingartistReviewed in the United States on November 14, 2018
4.0 out of 5 stars
Enjoyable
Verified purchase
Enjoyable
One person found this helpful

BReviewed in the United States on September 30, 2019
4.0 out of 5 stars
Stupid
Verified purchase
Not that funny
2 people found this helpful

C. DeStefanoReviewed in the United States on June 15, 2020
2.0 out of 5 stars
An offer you should refuse
It is very nice that our neighbors up north want to give the creators and the viewers some hope for this show. In a random search I came across this and after seeing the first few minutes of season one, episode one, I was optimistic. However, as it progressed, the word cautions slipped in before optimism. After two episodes, I have to say that the edge i was looking for was a sharp as a butter knife and the jokes were a bit dry. The idea is funny and the animation was inspired, I just could not find it in me to continue watching as even the voice characters seemed a bit incongruous and at times, too labored. So, if you are thinking you are uncovering a hidden jewel and you are ready to sit back with Poutine and Moslon, hey! fuggetaboutit!
3 people found this helpful

DemarayReviewed in the United States on October 21, 2019
2.0 out of 5 stars
Good animation, but lame jokes abound.
This series actually has good quality animation and decent voice acting, but the jokes are lame. The writers are not just picking low hanging fruit here; they are picking up the rotten stuff from the ground. I watched the entire series, and I didn't find myself laughing so much as just a having couple of chuckles every few episodes. The characters are bad stereotypes, with formulaic personalities and abrasive attitudes. The plots are predictable and played out with no memorable moments, and you probably won't even bother remembering the character's names.

If you're considering watching this cartoon, I'd say "just fugget about it".

T. KingReviewed in the United States on January 10, 2020
5.0 out of 5 stars
I LOVE this show!!!
OK...so you know what happened with FAMILY GUY, right? I mean, by now the story is legendary. It's put on, cancelled after three seasons, then found a cult following (on DVD in that case,but streaming is just as effective) and was given another chance at life, only to become one of the biggest hits on TV? Well THAT COULD HAPPEN HERE! (Listen up, Amazon, Netflix, Hulu...the whole bunch!)

The premise is awesome, the characters are hilarious and it has everything it needs to become a long-running hit adult animated show. As a New Yorker who saw this (ironically) for the first time while I was in Montreal (and it was one of only two English channels I could get in my cheap hotel!), this show reminded me, and STILL reminds me of home! All this show needs to put it over the top is the right opportunity to be seen by a wide captive audience. Think I'm wrong? FUGGET ABOUT IT!!!

Forest NymphReviewed in the United States on June 3, 2021
4.0 out of 5 stars
Amusing
This is definitely an adult cartoon for the sort of people who like Family Guy, American Dad, or South Park. The humor is crass, relies on stereotypes and manages to flow decently. I think the theme song is one of the best parts of the show! From what I've watched so far, it's not as funny as Family Guy (good lord the oldest daughter character is obnoxious) but it'll do for light amusement when I don't feel like watching something serious or heavy, but am too tired or lazy to read or do something else. There's always something to look forward to, like Margot Kidder Sanitarium.

AnyaReviewed in the United States on May 28, 2021
4.0 out of 5 stars
Almost Perfect, TW Rape
TW: S01E08 Pedophilia, Rape, Sexual Assault
Great comedy and usually quippy and well written, except for the tired rape & sexual assault B-Plot in above mentioned episode, "The Man with No Butt".
S01E08 B-Plot: Petey wants to ask a girl out and enlists his sister to help him gain his confidence. While trying out pickup lines on the street, an old grey-haired woman (with saggy breasts, chin hairs, and a perm) comes onto him with heavy petting, caresses and hugs even though he is CLEARLY UNCOMFORTABLE. The old lady then takes him to her home, though Petey CLEARLY EXPRESSES HIS DISCOMFORT AND DESIRE TO LEAVE. She goes on to stuff his head into her breasts WHILE HE SCREAMS. Later on, he rejoins his family at the rodeo looking disheveled and distraught. His sister sees his flustered state and congratulates him, though he is clearly traumatized. The audience is lead to assume that he lost his virginity....hooray...?
See all reviews
Back to top
Get to Know Us
Make Money with Us
Amazon Payment Products
Let Us Help You
EnglishChoose a language for shopping. United StatesChoose a country/region for shopping.
© 1996-2022, Amazon.com, Inc. or its affiliates