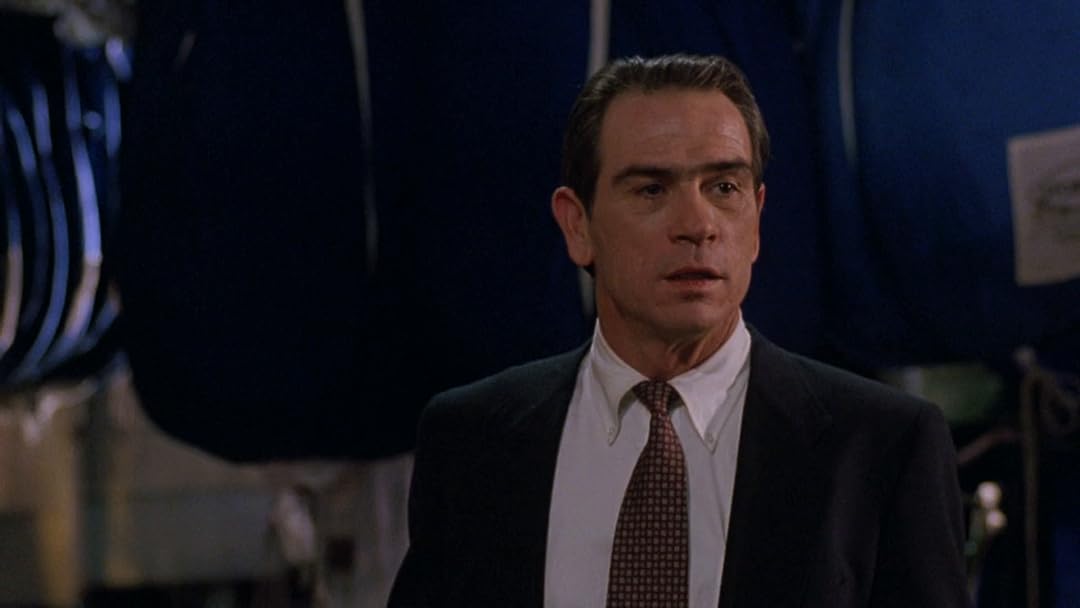 LodgingLadyReviewed in the United States on June 14, 2019
5.0 out of 5 stars
Adventure without the profanity
Verified purchase
A great movie with a great ending - like movies should be. The actors are first rate of course; Harrison Ford and Tommy Lee Jones. I love this movie because I can relax and not be irritated by all the 'necessary' profanity in todays shows, or the gratuitous violence and sex. This is proof that there is an art to good movie making and it doesn't require shock value.
62 people found this helpful

ProfessorReviewed in the United States on September 8, 2019
5.0 out of 5 stars
Tells a story in the Great Tradition
Verified purchase
Re-watching this film in 2019, I got to thinking about the state of Hollywood movies today, as compared to 26 years ago--or 40 or 50 years ago. Today, we're pummelled with CGI special effects, ludicrous story lines with tons of requisite "twists," scenes flashing at us so fast we can barely keep up, filmakers showing off their impressive "cleverness" at the expense of good stories, and a general atmosphere of amorality in a majority of films.

Flash back to 1993 and _The Fugitive_. No CGI special effects--the director Andrew Davis used a real train and a real bus in the horrendous accident scene, and it's stunning. The story line is linear and logical. The scenes are done carefully and meticulously; they linger when necessary, and they move fast when necessary. Davis is not flaunting his chops, although they're considerable; he's telling us a real human story--something which is largely missing from the innumerable "action" movies of today. And _The Fugitive_ has a moral message about justice and doing the right thing in the face of seemingly insurmountable obstacles.

It's great movie making in the tradition of Hitchcock, Lumet, et al.

_The Fugitive_ has earned its place on the list of all time great films. The two main characters couldn't have been more perfectly casted: Harrison Ford's Richard Kimble is stoic and laconic, but he's also a hero--a real human hero. Tommy Lee Jones gives one of his best performances ever, wisecracking throughout, but devoted to his job, and most importantly, empathetic enough to accept Kimble's innocence. Early in the film, he tells Kimble he doesn't care if he's innocent. In the final scene, when it's all over and Kimble is exonerated, Kimble says, "I thought you didn't care." Jones replies, "I don't. Don't tell anybody, OK?", but his smile belies his wisecrack. It's a perfect scene with perfect lines.

Yes, I'm waxing nostalgic. But when I think of all the dreck that passes for good cinema today, I can't help it. Watch this instead of the latest trendy Hollywood trash and be reminded what great filmmaking really is.

Johanna CormierReviewed in the United States on May 22, 2019
5.0 out of 5 stars
It still keeps me on the edge of my seat.
Verified purchase
I remember seeing this movie in the theater and literally being on the edge of my seat for the whole movie. We watched this disc twice in the month since receiving it and it still captures that feeling. In my opinion this is Tommy Lee Jones masterpiece performance. The movie holds the whole package of great acting, great dialogue, well developed plot, humor and suspense balanced well.
22 people found this helpful

Supermanick007Reviewed in the United States on May 30, 2016
5.0 out of 5 stars
Great story AND action. Holds up extremely well after 20 years!
Verified purchase
Purchased this movie to re-visit what I remembered to be a great movie years ago. Excellent quality on the Blu Ray.

This movie loses absolutely nothing in watching it now as opposed to 20 years ago. The action is great. Harrison Ford is outstanding. You will be pulling for Dr. Kimble to find his wife's killer from the second he runs away from that train. Tommy Lee Jones is also excellent. I can't think of many better action/thrillers over the last 30 years.
31 people found this helpful

joel wingReviewed in the United States on February 5, 2022
4.0 out of 5 stars
What a thriller!
Verified purchase
This was an amazing adaptation of the 1960s TV show. There’s Doctor Kimball/Harrison Ford accused of killing his wife/Sela Ward. The one-armed man/Andreas Katsulas who Kimball searched after. Gerard/Tommy Lee Jones who was turned into a federal marshal and more.

It has a beautiful set up. It starts off showing how much Ford loved his wife, then the murder, his conviction and then his hunt for the one-armed man. Ford is set up as a desperate man facing a huge loss. It immediately makes him a sympathetic character and is one of Ford’s more memorable roles.

Jones is just as good as the other side of the story. He is as determined as Ford is and just as meticulous. They make a perfect duo.

The movie has everything. There’s a bit of action like the crashing train at the beginning. There’s intrigue, who killed Ward? There’s a manhunt, will Jones capture Ford? Most importantly it’s driven by two impassioned personalities.
One person found this helpful

Reed WallerReviewed in the United States on July 28, 2015
5.0 out of 5 stars
The Fugitive 20th Anniversary Edition is the one!
Verified purchase
This is the one we've been waiting for! I wasted no time grabbing this, after the terrible disappointment that was the original Blu-ray release. The Fugitive is arguably one of the greatest murder thrillers of all time, right up there with Hitchcock's best, and it was deplorable to see it released in a sloppy MPEG-2 encode and with Dolby sound, pretty much indistinguishable from a mediocre DVD. Color was weak and uneven, picture was flat looking, and there were even some color registration problems in the print. And the lifeless sound. This movie deserved the best treatment, and it finally has it with a vibrant AVC encode and DTS-HD MA audio that pops right out at you.

The Fugitive is NOT a crystal-clear shot-in-the-studio film, like Hitch's pictures mostly were. Most of the film was shot on location, so it's not the crisp spectacular detail you use to show off your HDTV with. It's soft looking, with narrow depth of focus, lots of indirect and natural lighting. But the Blu-ray transfer is great: fine detail is there when it should be, the color depth is spectacular, good flesh tones, deep blacks, deep blues, deep reds and greens, and the narrow focus gives it an immediate, 3D sort of feel.

I'm very happy that I plumped down a few bucks for this re-release. I'm sure to watch this great film 100 times more, now that it looks and sounds as good as it should.
23 people found this helpful

M. WenchReviewed in the United States on May 1, 2019
5.0 out of 5 stars
Holds up to time
Verified purchase
Saw this when it first came out. Was enthralled then. Am enthralled now. Harrison delivers a Great performance of a loving husband who will not quit till his wife's death finds justice. Really feel that no review can do this justice, since this has been around, ( and parodied, "Wrongfully Accused" ). Tommy Lee Jones desereved his Oscar. He was tenacious.
7 people found this helpful

Diana H.Reviewed in the United States on December 28, 2017
5.0 out of 5 stars
One of the greats!
Verified purchase
One of Harrison’s best films! This movie will keep you on the edge of your seat from beginning to end! Great acting from Tommy Lee Jones as the chief law enforcement guy constantly pursuing the escaped felon! Love, love, love this movie!!
12 people found this helpful
See all reviews
Back to top
Get to Know Us
Make Money with Us
Amazon Payment Products
Let Us Help You
EnglishChoose a language for shopping. United StatesChoose a country/region for shopping.
© 1996-2022, Amazon.com, Inc. or its affiliates