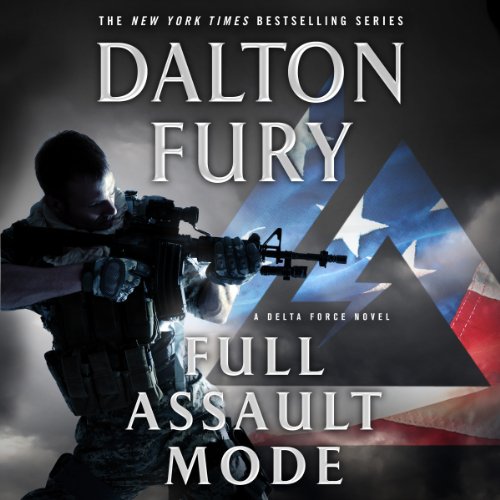 List Price: $25.51
You Save: $3.19 (13%)
By completing your purchase, you agree to Audible’s Conditions Of Use
Sold and delivered by Audible, an Amazon company
Share

4.4 out of 5 stars
4.4 out of 5
255 global ratings
How are ratings calculated?
To calculate the overall star rating and percentage breakdown by star, we don’t use a simple average. Instead, our system considers things like how recent a review is and if the reviewer bought the item on Amazon. It also analyzes reviews to verify trustworthiness.
Top reviews

Denver Root
3.0 out of 5 stars For Dalton Fury, a disappointment
Reviewed in the United States on October 9, 2017
Verified Purchase
The previous books in this series have been stellar, and although this one started and ended well, there was so much lacking thriugh the meat of the story that I was tempted to give up.

This secret new group he works for and their power, authority, and connections to the rest of the world are not explained well, and instead of feeling pleasantly mysterious, it simply produces frustration. His various transitions between government/extra-government/terrorist group/terrorist city/military custody/vigilante feel confusing and rushed, without Fury's typically-excellent contextualization and scene shifting. The extremely bizarre insertion of his "wife" into the storyline is certainly unexpected, but it never delivers on the subliminal promises it suggests, and after multiple chapters of that thread not really getting tied in, every mention of her ends up being disorienting. Motivations remain unclear throughout the book, even when it seems as though they were intended to be obvious.

I am glad I kept reading, for the last moments of the plot are nice, and finally start to make some sense of things, allowing me to avoid giving less than three stars; however, it is still too little too late. Because the previous books were SO good, I intend to purchase the next on faith that this was a fluke, but if the suffering I felt as a reader is repeated, I will have to put down these books for good. I have high hopes; I am confident that this is not Dalton Fury's best, and I am very much looking forward to better.
Read more
One person found this helpful
Helpful
Report abuse

John B
3.0 out of 5 stars I wanted to really like this book.
Reviewed in the United States on July 12, 2014
Verified Purchase
I wanted to really like this book. I read the beginning of the book on Goggle Books and then purchased it . The first chapters are fast paced action and very enjoyable. Then the plot line begins and it slows down , way down.
We all make allowances to enjoy fiction but to me the story line and characters can be inconsistent. Additionally There are some weapons and a basic medical error -it's a sucking chest wound not a sunken chest wound as mentioned 4 times.
Unfortunately the plot line is a good premise just poorly executed . I don't expect adventure books to be fine literature but I do expect the characters actions to be consistent and make sense . The book seems to skip ahead to finish or some chapters were removed. If you buy the book you'll like the first quarter of the book.
Read more
One person found this helpful
Helpful
Report abuse

Theodore Stasiuk
1.0 out of 5 stars Preposterous novel.
Reviewed in the United States on May 31, 2019
Verified Purchase
Plodding, boring but somewhat disturbing on a national level. I can't believe our government is so corrupt and bureaucratic that it allows incompetent leaders to stay at their posts. The protagonist seemingly plods through to story while being harassed by his own organization. His biggest enemy is his own leadership not the terrorists he's tracking. This story is a farce and a waste of time reading.
Read more
Helpful
Report abuse

Hunt3r
3.0 out of 5 stars 3rd time is not the charm
Reviewed in the United States on November 5, 2014
Verified Purchase
Having read his previous two Kolt Raynor books I have to say that I consider this latest adventure to be the weakest of the three. The biggest complaints I have with the story is the ending, I'm not going to spoil anything but I feel like Mr. Fury didn't know how to advance Kolt and Hawk further in the Unit so the ending seems sort of a cop-out to me. What hurts this story the most I feel however is the lack of a memorable villain. Daoud Al Amriki the main villain in the previous two stories was excellent and Kolt's opponents this time just seemed to lack everything that Daoud had. I think that is what hurts this story the most. Overall it wasn't bad, parts of it read like an 80's action movie, especially in the beginning in when Kolt and the boys are kitting up to go rescue some Americans from a Taliban ambush. I don't know if this book was rushed or if there was a serious case of writer's block and Mr. Fury just said "screw it" and released it regardless. Hopefully book 4 will be better. If anything, create a villain (who will last longer than 2 books - it took us 10 years to find and kill UBL so 2-3 book arch isn't too far-fetched) who we'll remember and love to hate as well.
Read more
Helpful
Report abuse

Bill K
5.0 out of 5 stars Another Great Major Kolt Raynor Adventure
Reviewed in the United States on March 1, 2021
Verified Purchase
Exactly what you look for in a Dalton Fury novel. No grey areas. You know who the "good guys" are and you know who the bad guys are. Spoiler alert... the good guys win!
Read more
Helpful
Report abuse

Aloha Bill 77
5.0 out of 5 stars Another good one in the series!
Reviewed in the United States on August 21, 2019
Verified Purchase
Lots of action, constant motion. I'm really enjoying the series!
Read more
Helpful
Report abuse
See all reviews

Satori
2.0 out of 5 stars Previous books were much better
Reviewed in Canada on July 15, 2014
Verified Purchase
Previous books were much, much better. This one almost feels like written by someone else. Mr. "Fury"'s research on this one was very sloppy. I have significant knowledge in both emergency medicine and computer network security, and the network intrusion scenario is simply way too convoluted. There are many unclassified threats he could have gotten a good brief on, that would have been plausible. As for the injuries sustained, their treatment, and their effect, it's simply unbelievable for anyone with some prehospital trauma experience. I have personally cared for many penetrating chest injuries, and it's really not like he explains it. Again, the author being former Delta would have fairly advanced tactical casualty care training, so this is disappointing.

The plot itself is also hard to believe. I understand the new deniable unit is deeply classified and all, but come on, they would have some backup and resources on a major threat like the one here.

The writing is oddly stilted at times, and is begging for a good copy editor's touch.

Overall, very disappointing. Let's hope the next book is back on track, or I will sadly not bother with this author anymore.
Read more
One person found this helpful
Report abuse