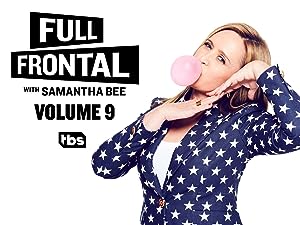 (10)
201918+
One of the most unique and visible comedic voices on television, Full Frontal with Samantha Bee is breaking up late-night's all-male sausage fest. This show, from the longtime Daily Show correspondent, features Samantha's nuanced view of political and cultural issues, her sharp interview skills and her repartee with world leaders.

ChihuahuaMom27Reviewed in the United States on February 22, 2019
5.0 out of 5 stars
Always Great, But Questionable Marketing
Verified purchase
We need Samantha Bee now more than ever. Her spot-on analysis of the country and the situation we find ourselves in currently- always on-point, and we love her ironic humor!! She takes a lot of hits for being Canadian, " how dare she comment on what's going on here"-she's actually a U.S. Citizen, by choice, and, like many of us, aspires to make us better. Not by wearing a hat that sports an empty slogan that isn't even original and might as well be pointed and white with eye holes cut out, but by asking the hard and serious questions in a way that makes us laugh but also to think.

I still need to point out, although I'm deducting no points because it's certainly not a content issue, this show deserves no less than five stars -although this is labeled as "season 9" , we are currently, according to TBS, actually in only season THREE of this series. At the very end of January 2019, someone decided to break up "season 8" from " season 9" , which began the very first week of February, making a purchase of "season 9" necessary , on a series which had aired exactly one week prior and which is reportedly in only its third actual season. I don't know of any other shows that do this, or why it happens, but it's really unfair and confusing. Shows like Empire, The Blacklist, Bring It, and This is Us - very popular shows - take MUCH longer breaks than one week without labeling a show that comes on exactly seven days, or even sometimes months, later and calls them a completely different season, along with a new price tag to purchase. I get confused because when it doesn't show up in my cue, when I know that it was on the night before and all of my other programs show up, I've learned that I always need to check and see if, even after only 7 or 8 episodes, we need to once again purchase yet another "season". I don't know who is responsible for this and am assuming it's not Amazon because this is literally the only show I know of that pulls this, but this is really not fair to the consumer at all.

C. HarrigReviewed in the United States on March 26, 2019
5.0 out of 5 stars
Smart, biting, and a woman’s blunt perspective. Thank god.
Verified purchase
Hard to not enjoy Samantha Bee’s bluntness.

SamReviewed in the United States on May 27, 2019
4.0 out of 5 stars
witty
Verified purchase
witty, entertaining.

MBReviewed in the United States on March 29, 2019
5.0 out of 5 stars
Love Sam Bee
Verified purchase
One of the best shows

Amazon CustomerReviewed in the United States on March 7, 2019
5.0 out of 5 stars
Reality with a dose of comedy so that you don't go crazy.
Verified purchase
She has a moderate democratic voice but will explore progressive perspectives. I like that she references and posts her sources. I mostly love that she is funny.

Michael DitmoreReviewed in the United States on April 5, 2019
5.0 out of 5 stars
Satire of the highest order
Sam B. is a comedic genius with her fingers on the pulse of today's zeitgeist. Bravo!!!

Jason KayReviewed in the United States on May 15, 2019
1.0 out of 5 stars
Completely accepting of any other view except her own.
Full of half truths to enforce her own narrative.
See all reviews
Back to top
Get to Know Us
Make Money with Us
Amazon Payment Products
Let Us Help You
EnglishChoose a language for shopping. United StatesChoose a country/region for shopping.
© 1996-2022, Amazon.com, Inc. or its affiliates