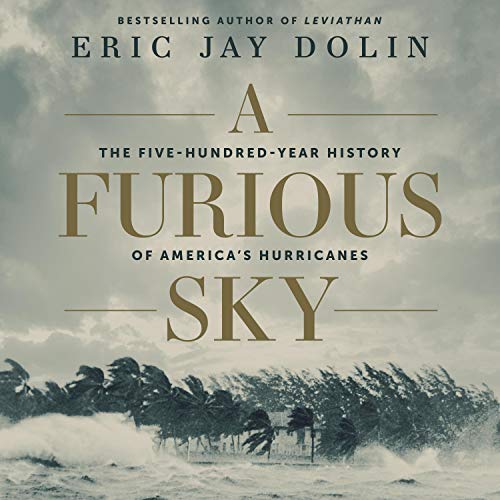 A Furious Sky: The Five-Hundred-Year History of America's Hurricanes

With A Furious Sky, Eric Jay Dolin has created a vivid, sprawling account of our encounters with hurricanes, from the nameless storms that threatened Columbus' New World voyages to the destruction wrought in Puerto Rico by Hurricane Maria. Weaving a story of shipwrecks and devastated cities, of heroism and folly, Dolin introduces a rich cast of unlikely heroes and puts us in the middle of the most devastating storms of the past, none worse than the Galveston Hurricane of 1900, which killed at least 6,000 people, the highest toll of any natural disaster in American history.

Dolin draws on a vast array of sources as he melds American history, as it is usually told, with the history of hurricanes, showing how these tempests frequently helped determine the nation's course. Hurricanes, it turns out, prevented Spain from expanding its holdings in North America beyond Florida in the late 1500s, and they also played a key role in shifting the tide of the American Revolution against the British in the final stages of the conflict. As he moves through the centuries, following the rise of the United States despite the chaos caused by hurricanes, Dolin traces the corresponding development of hurricane science, from important discoveries made by Benjamin Franklin to the breakthroughs spurred by the necessities of World War II and the Cold War.

4.5 out of 5 stars
4.5 out of 5
362 global ratings
How are ratings calculated?
To calculate the overall star rating and percentage breakdown by star, we don’t use a simple average. Instead, our system considers things like how recent a review is and if the reviewer bought the item on Amazon. It also analyzes reviews to verify trustworthiness.

Brian Lewis
3.0 out of 5 stars Here Comes the Story of the Hurricane
Reviewed in the United States on October 6, 2020
Verified Purchase
This is an informative, fast paced history of how hurricanes have impacted America history. It had strong moments to be sure, but being stuck in Hurricane Katrina is pretty much the same experience as being stuck in Hurricane Camille, or Sandy, or etc... Eventually, I found the book to be repetitious.

I thought the author needed to mix things up more to get a full book worth of material about this. To some extent, he tries. There are sections on the development of hurricane aircraft, advances in weather forecasting, even the feminist push to stop naming hurricanes only after women.

I will say I recommend the book because it does deliver on its promise, and it will certainly be helpful to someone wanting to learn a little about many America's hurricanes.

And the book does touch on climate change as a cause for increased hurricane intensity and frequency, but the book did not really cover the complete topic, in my judgement.
Read more
15 people found this helpful
Helpful
Report abuse

Robert B. LammTop Contributor: Historical Fiction Books
4.0 out of 5 stars Interesting and Informative (but with an editorial oversight)
Reviewed in the United States on October 24, 2020
Verified Purchase
A Furious Sky is not a great book, but it is a worthy combination of history and science -- the latter written in a manner that laymen and women can understand. As someone who lived in South Florida for 18 years (with a 10-year stint in NY in the middle, ending weeks after Sandy), Dolin very accurately and engagingly reports on the impact a hurricane can have, including the challenges of citizen complacency and media hysteria backfiring when the screamed-about storm fails to materialize.

However, one complaint that always bothers me greatly -- WHERE WAS THE EDITOR???? Specifically, the third paragraph under the heading "Katrina, 2005" leads off with a sentence that places Katrina in 1992. Really?
Read more
12 people found this helpful
Helpful
Report abuse

Dee
3.0 out of 5 stars Not and Easy Read
Reviewed in the United States on August 5, 2020
Verified Purchase
Maybe it's because the explorers and people of the Colonel times frustrate me with their basic lack of common sense, but I found the majority of this book to be a hard read. Or I may be an idiot. I'm not sure.
It is very informative but just not delivered in a way that captures my attention.
Read more
12 people found this helpful
Helpful
Report abuse

Douglas A. Haak
5.0 out of 5 stars A timely and captivating indepth history; worth the read
Reviewed in the United States on August 16, 2020
Verified Purchase
Lighthouses, Whales, Pirates: Eric Jay Dolin got it all together in telling their stories in a way that is accessible to the average reader; all there neatly packaged between two hard covers. Now he has done it again with a more timely topic, one that has been the center of news in the past and not so distant past, and will surely be a topic in the future, if not tomorrow's news. Those who live on the Atlantic and Gulf coasts of the United States, for whom names like Carol and Diane, Betsy, Hugo and Andrew, Katrina and Sandy are more than nice names for your kids, should find this book not only a crash course in layman's friendly language in Meteorology in general and hurricanes in specific, but also a recalling of personal history - where you were and how it affected you, and friends and relatives whose lives were impacted by these storms as well. This is such a pertinent book; not just a retelling of history, but a guide for understanding the future as well when it comes to these massive forces of nature. I'm normally not a fast reader. Some books can sit on my night stand for weeks and months. "A Furious Sky" reversed my reading habits. I'm sorry now that I have finished Eric's book....it was that good.
Read more
6 people found this helpful
Helpful
Report abuse

Rafael
5.0 out of 5 stars The human drama and the surviving stories
Reviewed in the United States on August 27, 2020
Verified Purchase
I am halfway reading this book, and I had to stop to write this brief comment. I have been fascinated with hurricanes since, at age 7, I survived one in the southern coast of Puerto Rico. We spent two nights in a traditional “tomentera, a storm shelter consisting of zinc plates put together in an inverted V fashion and partially buried in the soil. I have read many books on hurricanes both in the Caribbean and the United States. Some books emphasize the scientific part of explaining hurricanes. Other books analyze the social and economic aspects. Well, this author puts everything together in a beautifully written story, the science, the history of hurricane forecasting, the impact of hurricanes on human lives, and so forth. Eric Dolin does not leave an issue untouched. I found particularly interesting the attention paid to the suffering of Black Americans during and after the Lake Okeechobee Hurricane of 1928. Up to know, the only other book that I had read with an empathic and broad perspective on hurricanes was Marjory Stoneman Douglas’ work “Hurricane”. And yes, there are other books dealing with individual storms, like the Great Hurricane of 1938, but in Dolin’s book you get the whole 500-year story written with literary style. I can’t’ wait to finish this book, so that I can read it again for pleasure and the cast amount of information.
Read more
6 people found this helpful
Helpful
Report abuse

K. L Sadler
5.0 out of 5 stars Great book on the science and stories of US Hurricanes!
Reviewed in the United States on July 29, 2021
Verified Purchase
Terrific book on hurricanes. Loved the history behind all of it and the science. I'd read some of the books the author mentioned, especially on the Galveston hurricane, but I needed to read something less than a story, with more scientific facts. We've come a long way in the last 150 years in being able to track hurricanes, and warn people about them. Unfortunately, global weather change is making the hurricanes themselves more deadly and costly. And as this author says, it is only going to get worse if we do not get come type of control over our warming planet.

I felt that Dolan made the science very interesting and understandable. Even though I had read about some of these hurricanes before, I learned new information. And I was sorry to see the book end, which to me is a sign of a good writer, especially in sciences. Now someone needs to talk to New Orleans about rebuilding their marshes which were a natural break for hurricanes, and I think New York needs a sea wall...
Read more
One person found this helpful
Helpful
Report abuse

S. Morganville
5.0 out of 5 stars nonfiction at its best
Reviewed in the United States on August 24, 2020
Verified Purchase
A combination of history, the science of meteorology, and pursuit of how to forecast a storm"s possible path melded with gut wrenching stories of places affected and more significantly the stories of the people at the center of it all makes for an incredible read! Also, as a person who lived through Superstorm Sandy his focus co ered the well known like Breezy Point but also the less well known blizzards away from the coasts i the Virginias for example! Also the timeliness of the book's publication adds just that more to its impact.
Read more
2 people found this helpful
Helpful
Report abuse
See all reviews
Back to top
Get to Know Us
Make Money with Us
Amazon Payment Products
Let Us Help You
EnglishChoose a language for shopping. United StatesChoose a country/region for shopping.
© 1996-2021, Amazon.com, Inc. or its affiliates