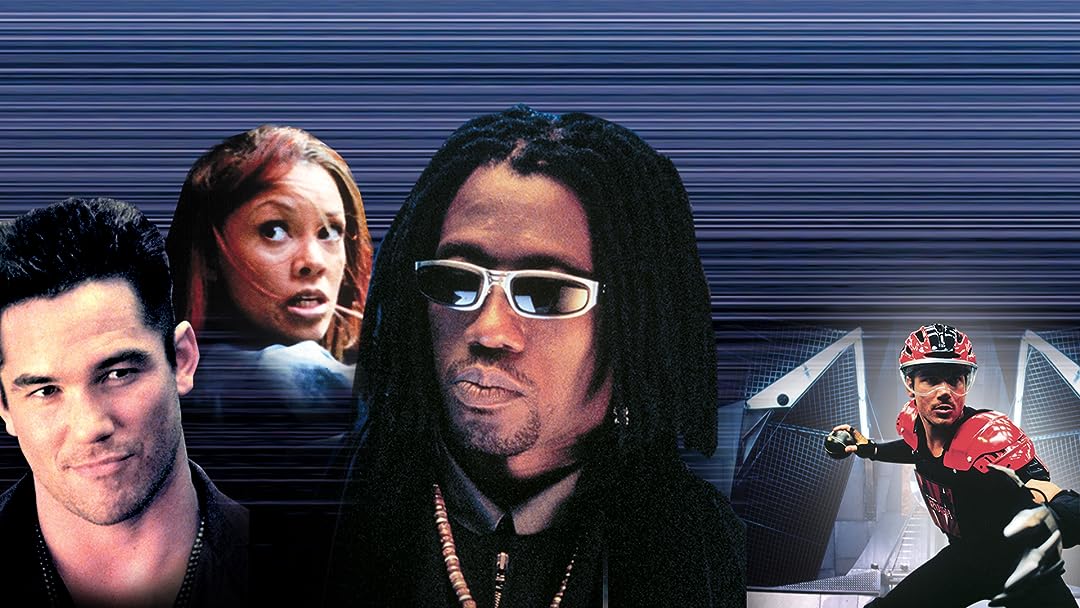 (28)
4.21 h 30 min1998R
In 2025, Futuresport is the official sport of the planet. But someone else is getting organized, and their game is war. Now superstar athlete Tre Ramazy (Dean Cain, "Out of Time") has more than the weight of his over-inflated ego to fight on behalf of the world. Tre learns that playing this sport may be the only way to stop a revolution.

Mike GishReviewed in the United States on December 15, 2018
4.0 out of 5 stars
You Won't be Disapointed
Verified purchase
One of the things that makes a movie work for me is a good villain, and that's one thing this movie lacks. The other thing this movie lacks is an accurate portrayal of Hawaiians. No actual Hawaiians were cast in the Hawaiian roles and the actors who played them were an embarrassment to the Hawaiian people (I lived there for 8yrs). The villain had Maori tattoos on his face which no Hawaiian would ever wear, had no Hawaiian accent (which all Hawaiians have) and was "one skinny dumb Haole" to boot.

Haole is a term used by Hawaiians to refer to individuals who are not descendants of the ethnic native Hawaiians or other Polynesians. The term "Haole" is mostly used derogatorily refering to Caucasians. As a people, Hawaiians are more honest than we are which is one reason they don't have a lot of respect for us in general. We're usually referred to as "Dumb Haoles".

So that's why only four stars. Other than that, the movie was great (considering it was made by "Dumb Haoles")!

LindaReviewed in the United States on June 24, 2014
5.0 out of 5 stars
A favorite
Verified purchase
Amazon is so easy to work with, Amazon Prime is one of the best purchases I ever made. I enjoy being able to purchase movies so I can watch them anywhere. Also, it has been very easy to replace my store-bought DVDs. It's really great to the Amazon offers free movies with Amazon Prime, as well as free two-day shipping which saves me a lot of money. I will continue to be a loyal customer and enjoy working with AMAZON.

MoviemanKevReviewed in the United States on October 17, 2018
2.0 out of 5 stars
SlowerBlade
Verified purchase
Sup-par Rollerblade clone that has little to nothing going for it

YolliebearReviewed in the United States on October 31, 2004
1.0 out of 5 stars
This is a waste of my 2.99............
Verified purchase
Subpar plot, substandard dialogue, even lousier editing. Futuresport is a lousy, lousy movie. Just pray that Dean's new television show, Clubhouse will keep him from making turkeys like this movie!

Bruce TopeyReviewed in the United States on April 3, 2015
1.0 out of 5 stars
One Star
Verified purchase
Perhaps the greatest display of stupidity I've ever witnessed. My one star is generous.

Michael ButtsReviewed in the United States on September 27, 2004
4.0 out of 5 stars
THE RETURN OF ROLLERBALL SORTA
There are some flagrant similarities to ROLLERBALL, but for a made for tv movie, FUTURESPORT is an entertaining, "Rocky" kind of movie.

Seems like in the future, Hawaii has decided it wants to be independent of the US, so they have a bunch of ruthless terrorists out to overthrow the government. One of their targets is supersportsman Dean Cain, who has become the idol of millions in the game of Futuresport, which is like ice hockey on flying skateboards, and you have to throw this metal ball into the goal BEFORE it becomes electrified and toasts your hands. Cain has a romantic history with newswoman Vanessa Williams and after Cain's selfcentered ego loses his team the world championship, he sulks a little. Then he comes up with the idea of having war avoided by staging a super Futuresport contest; whoever wins, gets Hawaii. Far-fetched, but a good plot device for some dandy stuntwork.

Cain and Williams are good in their roles; Wesley Snipes who served as executive producer, plays a rastaman who actually invented the game of Futuresport to help out the down zone, which is comparable to today's ghettos. Snipes seems to have a good time, and his Jekyll/Hyde role works for the movie. Bill Smitrivich does well as the coach. Adrian Hughes and Brian Jensen as rivals and players also do a good job.

DaveReviewed in the United States on May 9, 2001
4.0 out of 5 stars
I was expecting much worse than what I recieved!
This movie really surprised me. I thought it was going to be pretty bad and cheesy. However, it ended up being a pretty original movie. The game is Futuresport which Fixx {Snipes} invented in the underground {DOWN ZONE} so gangs could settle arguments in a non viloent way. However, the sport grows and becomes the most popular sport in the world. With the most popular athlete in the world Tre Ramesy. {Dean Cain} Switch to a Hawian gang ready to form a revolt against North America. {By the way I am just giving the general plot there is much more.} To prevent a war Tre challenges them to a game of FutureSport. You can watch the movie to know what happens next. This was surprising and pretty good movie. So I suggest you at least give it a try. This movie also stars Vanessa Williams as Tre's love interest.
2 people found this helpful

John MacArthurReviewed in the United States on February 1, 2018
5.0 out of 5 stars
Five Stars
Future Sport is a trash movie for trash people. 5 stars.
See all reviews
Back to top
Get to Know Us
Make Money with Us
Amazon Payment Products
Let Us Help You
EnglishChoose a language for shopping. United StatesChoose a country/region for shopping.
© 1996-2021, Amazon.com, Inc. or its affiliates