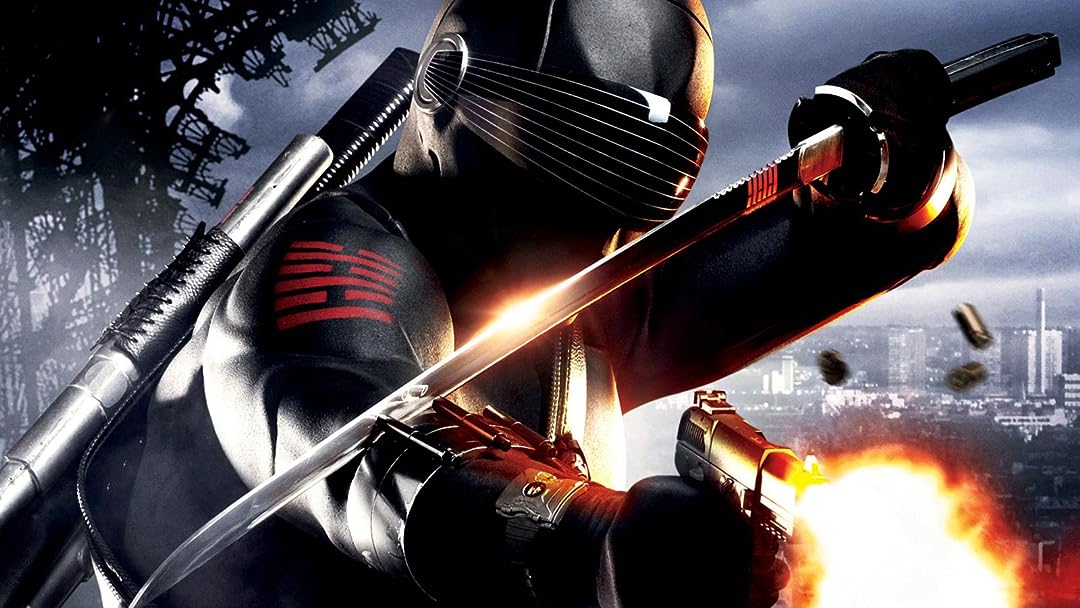 G.I. Joe: The Rise of Cobra

(4,070)
5.81 h 57 min2009X-RayPG-13
When all else fails... they don't! They are G.I. Joe, a top-secret elite strike force featuring the best operatives from around the globe. After a high-tech, secret weapon is stolen by the mysterious and evil Cobra organization, the G.I. Joes must race against time to stop Cobra from using the weapon and plunging the world into chaos. Starring Channing Tatum, Marlon Wayans and Sienna Miller.

danzig138Reviewed in the United States on September 3, 2018
1.0 out of 5 stars
PURE. CRAP.
Verified purchase
This is just *dire*. The main Joes are cast So. Very. Poorly. Marlon Wayans makes everything worse, and yes, that includes "Don't Be A Menace To South Central While Drinking Your Juice In The Hood" AND HE'S THE BEST ACTOR OF THE MAIN JOES!!!!!! And he's playing Ripcord. Ripcord got captured by a little kid. Ripcord was *never* cool Neither was Duke.

For the villains, they utterly waste the 9th Doctor and the 3rd Rock kid. No one seems interested in doing the damn movie.

The *only* good thing about this movie is the demonstration that trying to learn how to use a powered exoskeleton is probably a pain in the butt.

Ron BakerReviewed in the United States on August 19, 2018
3.0 out of 5 stars
Great...if your 13 :)
Verified purchase
Ok, the Saturday morning cartoon was more realistic and this makes the 1st G.I. Joe film look like a military documentary by comparison, still, the 13 year old in me gives this an extra star for relentless action, lovely women and over-the-top special effects.

Hey, its included in Prime so grab a 6 pack and take a drink every time they say "I've got this", you'll be hammered in the first 20 minutes..
17 people found this helpful

demonsRendangeredReviewed in the United States on March 12, 2021
2.0 out of 5 stars
Half cgi + half live action= unbelievable mess
Verified purchase
This is a pretty bad movie. The G.I. Joe brand goes way way back. A little Google search says it started back in 1964 but to be honest if I would've had a guess I would've thought even earlier than that. I want to keep this review on the subject of the movie but I just want to throw out there that G.I. Joe is something that does not need to be revived anymore than we need to start offering cigarette vending machines again. It's in the past, should stay in the past and I could write a huge article on why it should stay there. Well....on to what's wrong with this movie.

First and foremost, my goodness the amount of cgi used in this film is ridiculous. Why oh why didn't they just make the whole movie in cgi? It would've been better. This idea that mixing cgi in with live action footage has never worked. It's always too fake looking, people move at a 24fps fluidity while all the effects and objects animate at 60fps, it's just way too weird looking. It's a mess, that's what it is.

Second, the script writing is laughable at times and I'm pretty sure it wasn't intended to be that way. One example: Duke is in a room with other soldiers and in the center is a hologram of a superior lecturing him on his failure of the mission. Duke loses his cool and steps forward like he's going to hit the guy and his teammate grabs his arm and holds him back. Ha, ha, ha, really? The guys wasn't even there, it was just a hologram, it's not like there would've been any sort of consequence had he swung his arm. The movie has plenty of oversights like this.

Third, like a lot of modern action movies there's plenty of the stereotypical unnecessary slow motion action shots. I've never understood why this became a thing. Just let action sequences play out at normal speed. Nobody needs slow motion to be able to see that a person jumped through a window and landed on his feet successfully. It just ends up looking cheesy.

Bad acting, bad writing, way way way too much cgi, this movie has lots of bad structure to it. Despite all of this it still manages to be entertaining enough to watch but I wouldn't say it's so bad it's good. It's bad and at best a guilty pleasure.
2 people found this helpful

JordanReviewed in the United States on September 6, 2018
3.0 out of 5 stars
Enjoy it for what it is: a dumb action flick
Verified purchase
This movie is undeniably poorly written, the acting is sub par, and plenty of it makes no sense. It's even a bit sexist at parts, not pervasively but definitely noticeable. Still, it satisfies that action flick itch in a Transformers movie kind of way. There is a glimmer of a clever plot hidden in there that it's a shame they never really used that well, as it is brilliant, but the sequel is pretty bad. Still, if you want to zone out to some mindless action, there are certainly worse flicks to choose.
5 people found this helpful

DanSReviewed in the United States on August 30, 2018
1.0 out of 5 stars
Like watching someone play on twitch
Verified purchase
Heavy, heavy , heavy on the CGI, some more realistic than others, but easily noticeable in the car chases (like watching GTA). Like others have said, if you're a 13 year old boy, this is the movie for you. Light on story line and heavy on action. There is an attempt to build depth into some of the characters, but the motivations for turning to the evil side just simply fall laughably flat. Heavy on the good ol' conservative morality (and absolution), with some dated pokes at France (remember "freedom fries"?). I didn't expect much in the way of story and it didn't deliver.
12 people found this helpful

joel wingReviewed in the United States on March 7, 2021
3.0 out of 5 stars
As the action got bigger it didn't get any better
Verified purchase
This was the first GI Joe film. The story centered around Cobra stealing four warheads and Joe trying to get them back. Along with that was some background to the main villains and heroes like the connection between Storm Shadow and Snake Eyes. Really though this was just an excuse to have a bunch of action scenes pitting Joe vs Cobra full of gadgets, guns, ships and vehicles. Mixed in with that was a large dose of nostalgia for 80s kids who grew up watching the cartoon. Most of it was senseless fun but there were some problems as the movie progressed. One was casting namely having Joseph Gordon-Levitt as a member of Cobra. He still looked like a kid even with heavy make-up on. Second, while I liked the action at first, as it got bigger and bigger I didn’t think it got any better. Thus the giant climax at the end was just okay. That was my ultimate opinion of the film when it ended.
3 people found this helpful

Shama BoleReviewed in the United States on September 18, 2020
1.0 out of 5 stars
William Shatner devotees of acting
Verified purchase
It's embarrassing when the General (Dennis Quaid) goes on and on about how the GIs are the best of the best and then the bad guys cut through them like the proverbial hot knife through butter. The good guys are also embarrassingly incompetent. The bad guys are embarrassingly OTT. Just overall invites face palm face plants. There was a moment when the strutting ninja walks into a science facility and casually kills a nearby scientist to make a point; I wished it turned out that was the only scientist who could have helped him weaponise his crap. But, that would entail the movie having a sense of humour. I normally love movies like this, but it is so irritatingly macho and formulaic with nary a hint of charm. The way the bad guys operate is like a cheat hack for a video game - do whatever they want and are unstoppable. I got bored. It really is BAD.
One person found this helpful

First off the story is almost completely not recognizable. Aside from a few names of characters and some personality traits mostly everything else is "Hollywood" up.

Note, they aren't afraid to push the envelope with the way some of the scenes play out. Both the dialogue & action leads to potential depicted harm and death.

The Story is pretty generic but action a plenty! Most of the time, the entertainment is kept on full blast. Not too many slow scenes in my opinion.

Incorporating some actual principals that are applied in real world fields of specialization, the movie does a weird yet funny job of having the characters carry out these actions.

Mostly good special FX, with few inconsistencies here and there. Over the top but yet still simple, some of the technology & procedures presented is good in theory but was poorly delivered. A lot of Sci-fi fanfare for military operations and toys/gadgets.

Corny scenes and jokes, don't expect to watch the movie and feel like you were enlightened or challenged to think by any means.

Mostly good pacing of the scenes.

The relationship of a certain characters & certain female characters are a bit much. Also the copout of a save, kills the effort done by the actors.

Cons:
- Romances
- Duke (Tatum)
- General Hawk (Quad)
- Some of the cringe in delivery
- A certain someone's flashbacks
- Ripcord (Wayans)
- Baroness (Miller)
- Story (General)
- A lot of story scapegoating
- Usage of the Nanobots
- Wack ending
See all reviews
Back to top
Get to Know Us
Make Money with Us
Amazon Payment Products
Let Us Help You
EnglishChoose a language for shopping. United StatesChoose a country/region for shopping.
© 1996-2021, Amazon.com, Inc. or its affiliates