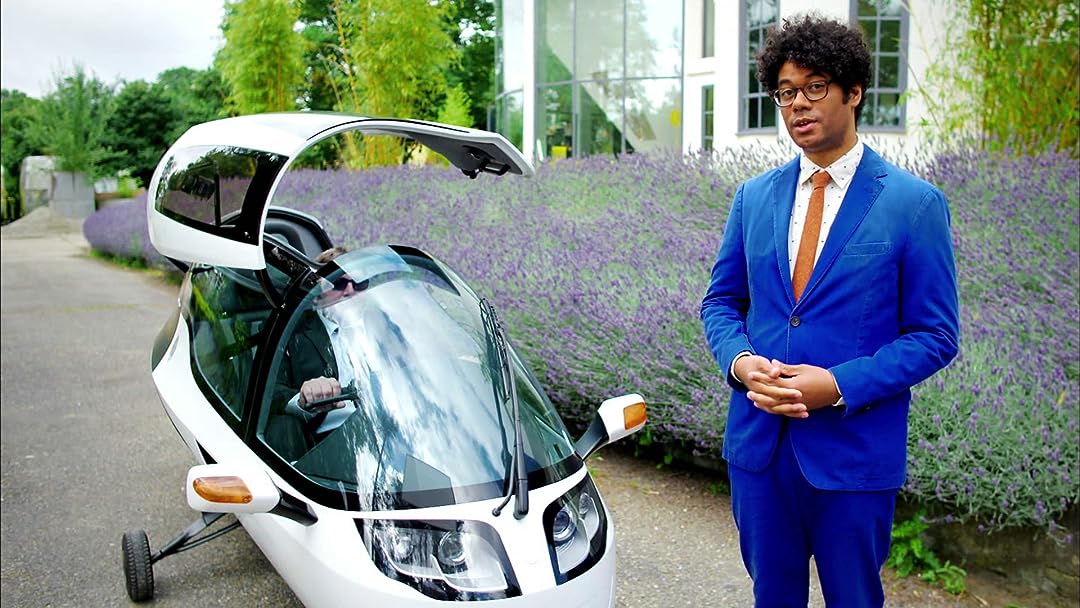 (31)
2013TV-PG
Filled to the brim with the most ambitious and innovative gadgets, Richard Ayoade shows how the humdrum of our daily lives can be spiced up to no end with an injection of awe-inspiring gadgetry.

J. LovettReviewed in the United States on March 23, 2021
5.0 out of 5 stars
Imaginative and extremely witty fun!
Amazon's algorithm recommended this to us after we finished watching Richard Ayoade in "IT Crowd" and we're so thrilled it did!

It's compelling and interesting and opens up the viewer to seeing the world in a fascinating new light. The negitive reviews probably don't enjoy Richard's type of witty bantery humor. We find him charming!

Highly recommended! Wonderful, entertaining escape from the hectic news. This show encourages you to use your imagination!

Sandy RReviewed in the United States on April 9, 2021
3.0 out of 5 stars
80% British humor/humour, 20% gadgets that are mostly unlikely to be used.
Initially I was disconcerted to see a self-proclaimed anti-nature host in the "woods" wearing a rather garish bright blue suit and a tie, although he did have rubber boots. I have never seen a camper wearing a tie, nor do I wear one when I go camping. It's the world's most useless piece of clothing anyway, so the sooner I can take mine off, the better. Once I adjusted/lowered my expectations from "finding things I'd buy or use to make camping easier" , to "watching him make fun of alleged camping gadgets", it was easier to watch. All the same, very little of the selection would be likely to be taken along by 99% of campers.

Here's a list of what Season 2, Episode 1 (Camping) had to offer:
a knife with close to 200 blades, clearly 90% useless for normal use,
a water pump he claims can only generate 1 (clean) pot of water per week,
a "straw" which allegedly removes 99.9% of germs/microbes, (might actually be useful, small enough to pack),
a "fire starting" laser light that was moved on before seeing whether it made more than smoke,
a "crocodile knife" kept stored in a bag, so it would take too long to remove if one was attacked,
a "tent" that resembled a body bag; cute but did not look like it would provide any warmth at all,
a bait dropping floating drone,
a fishing pole with a camera, the results of which were not helpful, (they did catch a fish, to be sure),
an amphibious car (if you go camping, who is going to bring an extra car along? Really.....)
a 14 foot inflatable movie screen & small projector that holds 8 movies (he's unclear on the concept of camping),
an oven too big to fit in just about any car,
a large clear bubble looking tent (no privacy at night or day) that costs about 6000 pounds,
an inflatable jacuzzi (again, not likely to be something to bring along camping),
an "avalanche bag" that sprouts 2 large pink hot-dog shaped wings to keep you at the top of the snow,
a massage chair,
a floating plate to serve champagne in the jacuzzi (yea, I know it's a joke, but c'mon, give me SOMETHING),
a device that will frost drinking glasses,
an auto-luminous body seeking telescope that picks out the brightest 5 objects in the sky,
a remote control self-heating jacket (actually MIGHT be useful, depending on amount/duration of heat),
a small ring that can open non-pull-top cans (might be useful if you don't have a 99 cent can opener.....)
a camper w/a pop up top & back that extends 5-8 feet (why not just use/rent a larger one to begin with?)
a sleeping bag with limbs built in (again, might be useful depending on warmth), and
food delivered by drone.

I was hoping for items I could really use, such as: a VERY bright small durable flashlight, a GPS for hiking with sufficiently long battery life and accuracy, high protein non-perishable food packets, usable tents (at the moment, I have two shaped like large pizzas, round, about 2 inches high and a yard across, with semi-rigid plastic tubing sewn into the edges; so that when tossed into the air, it self-inflates by the time it falls down to the ground, about 3 seconds later. VERY useful, super easy to set up and fold up, etc. THIS is the sort of gadget I was expecting), and so forth.

I'll probably watch the rest of the series, but more for amusement than for any potential purchase.
One person found this helpful

5everReviewed in the United States on March 23, 2021
5.0 out of 5 stars
Love humor, love gadgets. Perfect show, perfect host
I stayed away from this show initially because of the low rating on amazon. I love Richard Ayoade so I didn't want a bad idea/bad writing change my impression of him. However, I decided to give it a go because I browse random gadgets all the time and this still sounds like a good idea. Love it! I don't know why the rating was so low but this is a gem! There is a bit of the original top-gear feel to it and I truly miss that show in its original form.
3 people found this helpful

BritTexanReviewed in the United States on April 5, 2021
5.0 out of 5 stars
Dates from 2012 - 2015 but still lots of great gadgets, great fun and great entertainment
British comedian Richard Ayoade and various guests show us lots of gadgets in every episode, from utterly bonkers ones to ones I really wish I had. Yes, it's from a few years ago but it's still great fun and well worth watching. This is one show I would love to see them remake now.
2 people found this helpful

noappliancesReviewed in the United States on April 24, 2021
3.0 out of 5 stars
Not interesting, and not sure what the point is
Mostly what I get from this is that Richard is very much not a gadget person. I don't believe he uses any of the featured gadgets, because they're nearly all silly, obscenely expensive, or impractical.

So, if you're not interested in gadgets, why do you make a gadget program? Richard has some funny lines, but it's not enough to carry a whole show.
2 people found this helpful

PreacherReviewed in the United States on March 19, 2021
3.0 out of 5 stars
Death of a generation
A fun show, and to a degree, product endorsements. However, it is more sad proof that- in the event of a global " SHTF" event, the millennials will be the first to die.
4 people found this helpful

Kindle CustomerReviewed in the United States on April 16, 2021
3.0 out of 5 stars
Product placement 5000
I'm definitely not qualified to write a review about the entire series. What I can say is that episode one, season two must have more product placement than I've seen in any show ever in my life. Granted this is a gadget show with the number of bad gadgets and the terrible presentation just blow my mind. I felt uncomfortable watching the entire episode.

Time to go find some mind-bleach.
One person found this helpful

Diane FunkReviewed in the United States on February 3, 2022
4.0 out of 5 stars
Richard Ayoade at his best - it's British comedy, don't come expecting education
Richard Ayoade has his own special brand of humor, even for the Brits. In reading a lot of the other reviews, it is clear a lot of the US viewers don't get it, or appreciate it. Try watching IT Crowd and you will begin to understand his humor better and then this show will seem a lot funnier. I loved watching this show and seeing his interactions with all the various British comedians - on this and on Travel Man. If you're coming to this show to be informed about gadgets? Well, it's from 7-10 years ago, so not exactly up to date.
See all reviews
Back to top
Get to Know Us
Make Money with Us
Amazon Payment Products
Let Us Help You
EnglishChoose a language for shopping. United StatesChoose a country/region for shopping.
© 1996-2022, Amazon.com, Inc. or its affiliates