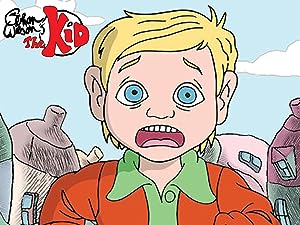 Season 1
(5)6.32001TV-MA
GAHAN WILSON'S THE KID is an irreverent take on childhood's most prevalent fears using cutting edge humor and an adult sensibility?

Vance L. BlosserReviewed in the United States on June 14, 2013
5.0 out of 5 stars
A treasure for Gahan Wilson fans
Verified purchase
Anyone who was a fan of Gahan Wilson's strip NUTS in the National Lampoon might want to check this out. I had caught a few minutes of it very late one night but was way too sleepy to stay up. When I found it was available for download I decided to catch up.

If you are expecting a straight book to screen adaptation, don't bother. The original strip took place in the 40s or early 50s, this feature has been updated - the kid has a PC in his room, the cute hat is gone, and he and his friends spend some time at the mall. Additionally, a good bit of the time is spent on his daydreams or at night, nightmares. I can see something like this had to be done to keep a modern day audience's attention and they actually pulled it off fairly well. One difference is that you see the adults here - in the strip you rarely saw more than a lower torso or hands. They also fleshed out the kid's family - his father is a Doctor. I don't recall any vocation being revealed for his Mom but she was pleasantly portrayed.

The main topic of this episode is an expansion of the strip where the kid had to dissect a cat and it comes to haunt him at night. Casting was spot on, William Shatner was the biology teacher (and definitely a Wilson character!), and the cat was Ed Asner. They both hit the proper balance of creepiness and believability for the characters.

Although this does deal with some childhood lessons, I would urge caution with kids - the language is pretty rough.

Still, I enjoyed it enough to get the other two episodes and am happy to have seen them. I just wish they would allow you to download it or buy them on a DVD. As it is you have to stream it each time. Video and audio quality was excellent.

Fredy B. Reviewed in the United States on June 16, 2016
5.0 out of 5 stars
Funny show.
Verified purchase
Saw this a loooong time ago and when I found it on Amazon I had to get it. Funny show.
Report abuse

Kindle CustomerReviewed in the United States on February 4, 2013
5.0 out of 5 stars
this show is badass
Verified purchase
i love this cartoon it sucks it was canceled so soon, hard to find cartoons with adult humor in them.
2 people found this helpful
Report abuse

Outcast28Reviewed in the United States on June 27, 2019
5.0 out of 5 stars
One of the best funnies in history!
I recorded it on television once, but now that it's on digital, I just want to know if I buy it, it'll be on my iTunes library and other digital libraries.
Report abuse
See all reviews
Back to top
Get to Know Us
Make Money with Us
Amazon Payment Products
Let Us Help You
EnglishChoose a language for shopping. United StatesChoose a country/region for shopping.
© 1996-2021, Amazon.com, Inc. or its affiliates