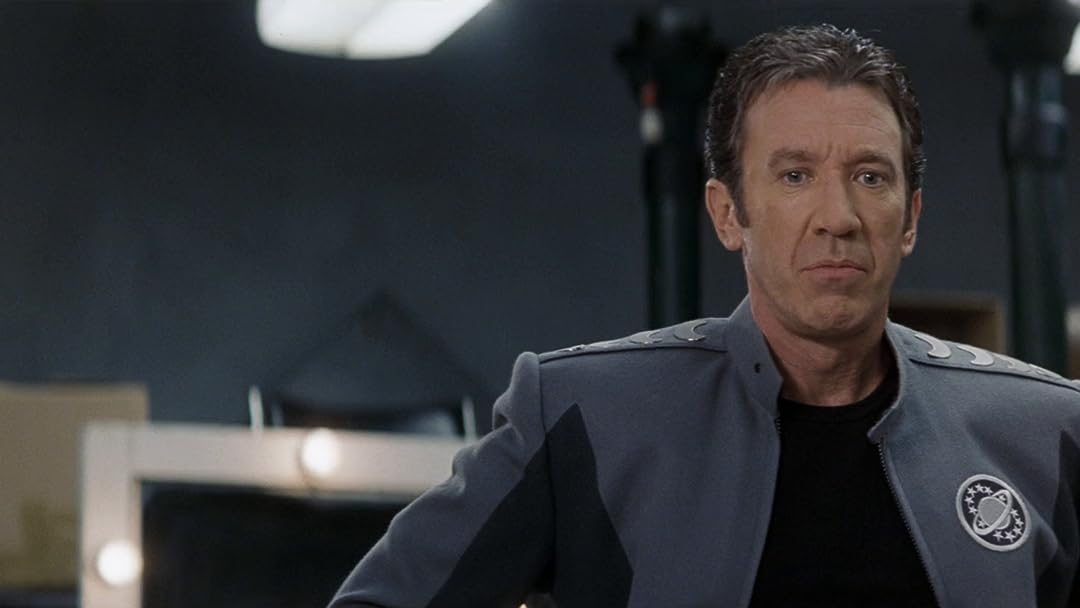 K. CallahanReviewed in the United States on January 9, 2018
5.0 out of 5 stars
Still Love It After Hearing It Hundreds of Times
Verified purchase
When this movie came out on dvd, I was working in a pharmacy that had a little tv with a dvd on repeat on for the customers in the waiting area. That meant that whatever movie was playing, I got to hear (but not see) it hour after hour, day after day. The noise of the podracers from Star Wars Ep. I still makes me want to stab a kitten. When the store started selling Galaxy Quest, into the dvd player it went. And I listened to it over, and over, and over. And over.

After all those times listening to it, I wanted nothing more than to have a chance to actually see the movie. There were some jokes that just didn't make sense without the visual cues to accompany them, and I wanted to get them because all of the jokes that did work just on listening were still making me laugh after listening to them replay for weeks. Once I did see it, I loved it even more.

When one of my kids complains that something is too hard, there is often a parental yell of, "Never give up! Never surrender!" Galaxy Quest is my son's strongest association with Alan Rickman, so whenever we see him in something else and my son says that the actor looks familiar, all I have to say is, "It's Alexander Dane" and he's happy. When we watched Finding Dory and he wanted to know who the heck Sigourney Weaver was, his association was Gwen DeMarco.

By Grabthar's hammer, I love this film.

Jennifer LagasseReviewed in the United States on February 26, 2019
5.0 out of 5 stars
Funny
Verified purchase
Love this
41 people found this helpful

Timothy R WilliamsReviewed in the United States on October 29, 2018
5.0 out of 5 stars
Love it
Verified purchase
Love it
25 people found this helpful

RDDReviewed in the United States on February 28, 2020
5.0 out of 5 stars
One of the Best Star Trek Films!
Verified purchase
Dean Parisot’s 1999 film “Galaxy Quest” adapts a story by David Howard parodying science fiction and pop culture, focusing on the cast of a short-lived television series whose regular routine of attending pop culture conventions and doing promotions is interrupted when aliens, who believe the television show was a documentary, visit them and want their help resolving an intergalactic war.

The film largely draws upon the legacy of “Star Trek,” with several of the characters resembling the original “Trek” cast. For example, Tim Allen’s character Jason Nesmith closely resembles William Shatner and his portrayal of Captain Kirk. Sigourney Weaver portrays Gwen DeMarco, who was the communications officer on the fictional series, and resembles Nichelle Nichols. Alan Rickman’s Alexander Dane, an actor who detests his alien character Dr. Lazarus, recalls Leonard Nimoy’s initial efforts to move past “Star Trek” in his first memoir, “I Am Not Spock.” Tony Shalhoub’s Fred Kwan recalls the easygoing nature and likeability of George Takei, while Sam Rockwell’s Guy Fleegman was a redshirt on the show who relies on that legacy for a sense of identity. Finally, Daryl Mitchell plays Tommy Webber, who was a child actor on the series, and resembles Wil Wheaton’s character of Wesley Crusher on “Star Trek: The Next Generation.” Enrico Colantoni, a great character actor, plays Mathesar, the leader of the alien Thermians and sets the tone for all the Thermians while Robin Sachs makes Roth’h’ar Sarris a thoroughly impressive villain who could easily have appeared in one of the 1990s “Star Trek” series (and Sachs did appear in “Babylon 5” and “Star Trek: Voyager”). Rounding out the case is Justin Long, playing a fanboy who stands in for all Trekkers. “Galaxy Quest” should be considered an unofficial “Star Trek” film as it pays loving homage to the franchise and its legacy.

Bonus features on this Blu-ray Steelbook edition include Galactopedia (an interactive guide by Michael and Denise Okuda, who designed the aesthetic of 1990s era “Star Trek” computer displays); Historical Documents: The Story of “Galaxy Quest” (a mini-documentary about the making and legacy of “Galaxy Quest”); Never Give Up, Never Surrender: The Intrepid Crew of the NSEA Protector (cast interviews); By Grabthar’s Hammer, What Amazing Effects (examining creature effects, production design, in-camera effects, CGI, and more); Alien School: Creating the Thermian Race (examining how Enrico Colatoni came up with the Thermians’ way of speaking and how the actors collaborated to develop the movements and quirks of the aliens); Actors in Space (about what it’s like for actors to parody actors); Sigourney Weaver Raps (a rap video Sigourney Weaver and some of the other cast made as a birthday present for her agent while filming); Deleted Scenes; and a Thermian Audio Track. One of the best things about the bonus features is how the interviews use the original 1999 interview footage and juxtapose it with more recent interviews, showing the legacy of this film 20 years later.
7 people found this helpful

AliciaReviewed in the United States on November 24, 2018
5.0 out of 5 stars
I love it
Verified purchase
Love it
22 people found this helpful
See all reviews
Back to top
Get to Know Us
Make Money with Us
Amazon Payment Products
Let Us Help You
EnglishChoose a language for shopping. United StatesChoose a country/region for shopping.
© 1996-2022, Amazon.com, Inc. or its affiliates