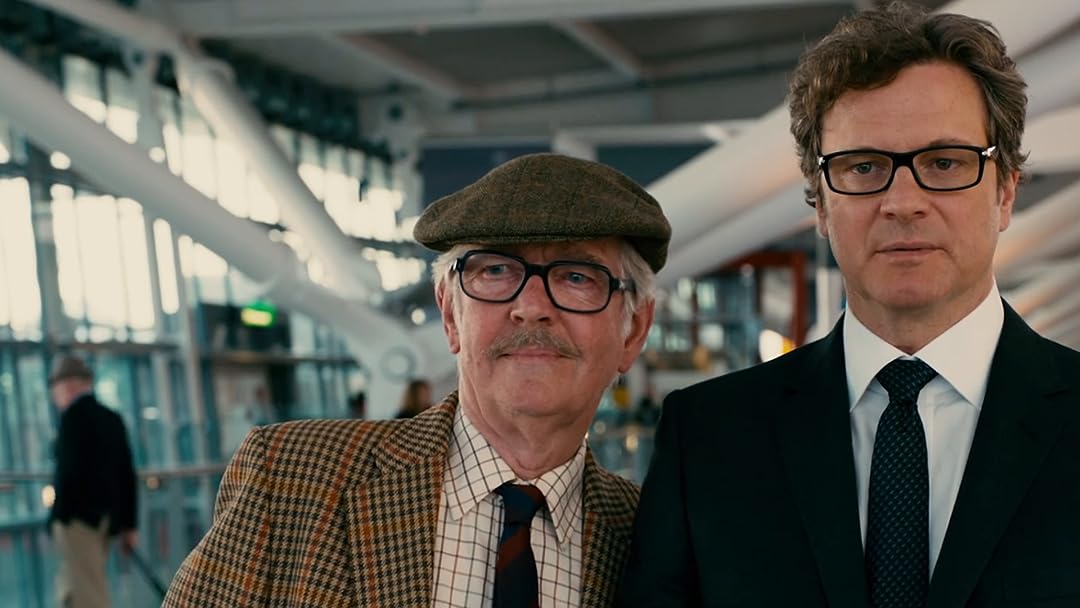 drollereReviewed in the United States on May 4, 2014
4.0 out of 5 stars
the coen brothers through hoffman's lens
Verified purchase
this is a very well done comedic caper, with brightly outlined characters that are superbly cast (firth, courtenay, diaz and rickman), plenty of funny business (the scene in the savoy where diaz and firth quibble in perfect deadpan over the merits of "the little major" had me in tears with laughter), and the several plot twists were just absurd enough to recharge the comedy without destroying the fantasy. the film opens with a beautiful long sequence, the launching and execution of the caper in its entirety -- which involves the sale of a fake monet painting (the work of a talented forger, courtenay), purportedly owned by a texas cowgirl (diaz) to a bullying billionaire (rickman). this turns out to be a daydream of the caper mastermind (firth). the actual caper is then portrayed in humorous contrast, one miscue or impediment after another. several unexpected complications throw the plot into full improvisation, and as the final twist, in the last scene, we discover that we haven't understood the caper at all. it's all very cleverly put together, and the comedic chemistry among the actors is delightful.

as a diehard coen brothers fan, i have to mention this quirk: the screenplay is by the coen brothers but is "mise en scène" by michael hoffman. if you know the coen brothers movies, the effect is uncanny. at some points you can see the coen visual humor blossom on the screen -- for example, the texas mobile home, the blustery femininity of the texas cowgirl, the natty demeanor of the art forger. but other scenes, such as the prolonged shenanigans in the savoy hotel, seem cut from a late ernst lubitsch caper. this puts a peculiar burden on colin firth as the caper mastermind, who must get punched in the face like nicholas cage in "raising arizona" but look unflappably suave with no pants on running around the savoy hotel. the good news is that firth is quite good at striking the balance ("did you say, room *thirteen* eighteen?") and the comedy amalgam of coen and lubitsch is great fun to watch.

Angela del VReviewed in the United States on May 28, 2019
4.0 out of 5 stars
Good if you're looking for a "lite" caper movie
Verified purchase
I'd call this film a bit of a romp, with some truly funny moments in it. I give it only 4 stars b/c there are times when I feel it over-reaches. But if you're looking for something light and with some interesting twists and surprises, this will fit the bill. If you liked the modern re-make of The Thomas Crown Affair, there are elements of that here. Colin Firth is good in a comedy, Alan Rickman is a perfect, obnoxious upper-crusty type you love to hate, and Cameron Diaz is, well, Cameron Diaz. This is good summertime-at-home viewing.
One person found this helpful

JayCReviewed in the United States on May 21, 2020
5.0 out of 5 stars
Funny Movie!
Verified purchase
The movie is pretty funny!! I rented it because of Alan Rickman and he never disappoints!! The only awful part is listening to Cameron Diaz attempting a god awful Texan accent!! Eeeeeeee!!!!
2 people found this helpful

TCampbellReviewed in the United States on May 7, 2014
5.0 out of 5 stars
Excellent from start to finish!
Verified purchase
Gambit isn't one of those movies that just lists big stars that you love but isn't really that great. The plot delivers from start to finish, the jokes deliver from start to finish and the actors are great as always. It's not often we laugh so hard that we have to stop the movie. We usually only do that with a few famous sitcoms out there. But we had stopped this movie numerous times to finish giggling or laughing! That just doesn't happen very often.

You cannot figure out the end by the start of the movie, the jokes are extremely witty and sly, understated and performed exactly right. Alan Rickman, Colin Firth and Cameron Diaz are awesome. You didn't want anyone else in each role. It's perfect. We don't enjoy a lot of movies these days. The smart, dry and hysterical humor, like the kind you have to catch in Shakespeare plays (no this isn't Shakespeare) is here. If you love pitch perfect, well done acting that doesn't rely on goofing around or bathroom jokes, here's your movie. Finally!

AnnieReviewed in the United States on July 21, 2015
3.0 out of 5 stars
GAMBIT
Verified purchase
I expected so much more from this video after I saw the ads for it. It was kind of lame even Colin Firth, Cameron Diaz and Alan Rickman could not save it. I love Colin Firth and really expected more of him. So far I have loved all of Cameron Diaz' movies but this one was a dud. Alan Rickman was wonderful in Sense and Sensibility, even Love, Actually but not in this one. I don't think I want to recommend this movie because I still have not figured out what it was about!!
4 people found this helpful

Martha Ann KennedyReviewed in the United States on February 7, 2020
4.0 out of 5 stars
Amazon's description is different from
Verified purchase
this actual film. There's no statue. No spitting image of a rich man's wife, but it's a great story, involves a theft, is a lot of fun to watch. They seem to think it's the 1966 movie with Michael Caine.
One person found this helpful

katy b.Reviewed in the United States on January 17, 2020
2.0 out of 5 stars
rediculous impression of a person ftom Texas
Verified purchase
The story was cute and Colin Firth was delightful, as always, but watching Cameron Diaz portray a Texan really made me want to turn the movie off. I understand she was most likely directed to act that way, so I blame whoever was in charge of that as well. It's always unnerving to see people from Texas categorized as uneducated hillbillies. I am from Texas, and I can assure you we don't talk like that or dress like that! I understand that having an over-the-top Texas character was supposed to be part of the humor of the film, but it just fell flat.
One person found this helpful

Clinton EnlowReviewed in the United States on May 11, 2014
3.0 out of 5 stars
Gambit
Verified purchase
Gambit is a mildly diverting time waster that I've been waiting to see for a while because of the names of its two writers prominently attached to its marketing.Sure Gambit isn't a Coen Brothers film per se, but the presence of Colin Firth and Alan Rickman doing their best to be funny almost hides the unfortunate anchor keeping it from being something you'll remember long after watching.
I've never seen the original Gambit so unlike The Italian Job or True Grit I don't have that bias holding me back from liking the film. As it goes Gambit is a mildly humorous film driven by stoic Colin Firths unfortunate ability to be a goof ball mucking up what He sees as the best made plans. Using the presence of an American Rodeo star He plans to con his boss into buying a forged painting thought lost to the ages from Nazi plundering. Thats the gist of the story told in an amazingly short time, something to hold in regard in this age where every film seems to need to push the two hour boundary.
Then again this isn't A Serious Man, or even Raising Arizona. It is also thankfully not The Ladykillers, finding the right tone and carrying it through several setups to the finale earning some chuckles along the way. The appeal of Rickman and Firth go a long way in to providing humor to the story. Firth plays the hapless Harry Deane well creating a character who's not willing to admit defeat even when his actions are creating more and more chaos in his reality. Theres a long sequence I particularly liked in the middle of the film that Firth just plays right where He's stuck in hotel, trying to escape a laundry room without pants. Its silly but the way Firth handles every obstacle was funny to me.
Rickman on the other hand plays that Alan Rickman character very, very well as an egotistical millionaire boss, One of the clever things about the role is the way its meant to subvert our view every so often, from the opening sequence which is changed in a twist, to his flirtations with Diaz. This is like the melding of Professor Snape and Hans Gruber played by an actor having fun.
Less fun is the one thing that felt wrong in Cameron Diaz. I'm not one of those people who hate Ms. Diaz as an actress but to me compared to Rickman and Firth her P.J. Puznowski is too broad a performance, ill fitting in the role. From the accent to the way she dresses Diaz was a performer trying to be funny without the grace to actually make me laugh which is a shame.But then again in an eighty minute movie its not a terrible flaw especially when Firth and Rickman are doing the heavy lifting with their characters.
In the end Gambit won't be remembered a year from now. Its not a great comedy but its a fun movie for that hour and a half that entertained me despite its problems.