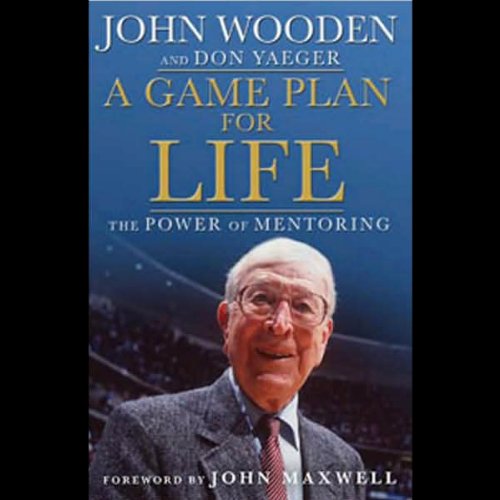 A Game Plan For Life: The Power of Mentoring

4.7 out of 5 stars
4.7 out of 5
81 global ratings
How are ratings calculated?
To calculate the overall star rating and percentage breakdown by star, we don’t use a simple average. Instead, our system considers things like how recent a review is and if the reviewer bought the item on Amazon. It also analyzes reviews to verify trustworthiness.
Top reviews

Robert T. Hess
4.0 out of 5 stars Game Plan for Life
Reviewed in the United States on December 26, 2011
Verified Purchase
Every so often, a great man or woman walks the Earth. Many times we don't realize or understand how great they were until they are gone. Such was the case with John Wooden. There have been many books written about John Wooden. This one ranks as one of the best--not just because it was the last one written before he died but because of the topic he addresses--the power of mentoring.

We are just starting to realize how important mentors are in the lives of our young people. The research and evidence regarding the power of mentors to help children break through poverty barriers is staggering.

2. Make each day your masterpiece.

5. Make a friendship with fine art.

6. Build a shelter against a rainy day.

7. Pray for guidance and give thanks for your blessings every day.

John Wooden was faithful, consistent, and committed. His priorities were in order, and he never deviated from those priorities. In this day and age when a new thing comes along every 60 seconds and gets our attention off the main thing, it is nice to see an example of someone who kept their "hands on the plow" and achieved things in his field that are still unmatched. There are no shortcuts. Achieving greatness in any field takes time, effort, and persistence.
Read more
4 people found this helpful
Helpful
Report abuse

Mark Goulston
5.0 out of 5 stars What Every Coach and CEO Needs to Read
Reviewed in the United States on May 22, 2010
Verified Purchase
There is a rampant disease out in the world of coaching and leadership. Whether it be on the field, the court or from the corner office, out of their own frustrations and inability to positively enroll and engage their sports and business teams and keep them on the road to success, more leaders and coaches are resorting to shaming, blaming and "throwing people under the bus."

One of the greatest tragedies in sports and in business is when instead of setting talented people up for success, you set them up for failure.

Wooden's book on mentoring is an antidote to the leadership poison that is so widespread.

If you read it and heed it, you cannot help but be ennobled and enabled to get the most from your people.

Monty Rainey
5.0 out of 5 stars More good instruction from a champion of life.
Reviewed in the United States on November 16, 2009
Verified Purchase
When it's all said and done and the maker calls us home, the real measure of a successful life has to have a lot to do with how much you improved the lives of those around you. With that in mind, few people come close to the life of John Wooden. There are untold vast numbers of people who have become better people and lead better lives because of the coach. Through his books, many of those people, like myself, never even met him.

In his newest book, and quite possibly his last, A GAME PLAN FOR LIFE, Coach Wooden teaches about mentoring. I really like the way the book gives mentoring from two different approaches, but giving and receiving. The first half of the book profiles seven people who mentored Coach Wooden. The last half profiles seven people who were mentored by him, either directly or indirectly.

I found the mixture to be very interesting, and yet probably very similar to most other people. Among his mentors, coach lists his father, 3 former coaches and two people from history he never met but spent hours reading about. Among the mentees, who each wrote their own chapters in the book, we find 3 former players at UCLA, 2 other coaches, a teacher who had never met the coach, and his great-grand-daughter.

It's interesting to see how mentoring is both given and received in different ways to meet the needs of the recipient. The book is filled with sage quotes and life lessons that will touch readers ina variety of ways.

While as always, I loved what the coach wrote, I particularly enjoyed the chapter written by Dale Brown, coach of the LSU basketball team. Coach Brown knew Coach Wooden, but only because they had played against one another when Coach Brown was an assistant coach at Utah State. When he accepted the head coaching job at LSU, he turned to Coach Wooden for advice.

Detailed in his chapter are some of the many questions he asked coach. This really gave a good structure on how to proceed when seeking out a mentor and how to best learn from someone you don't know well.

I took a lot away from this book. I think you will too.
Read more
22 people found this helpful
Helpful
Report abuse

MLeland
5.0 out of 5 stars Coach Wooden is awesome!
Reviewed in the United States on September 20, 2018
Verified Purchase
Another great book about arguably the greatest coach in any sport in history. This was a fascinating read about some of the folks who have influenced John Wooden and some of the folks whose lives have been changed by Wooden's mentoring. The chapter written by his great-granddaughter was especially touching.
Read more
Helpful
Report abuse
See all reviews

Amazon Customer
5.0 out of 5 stars must read for all coaches and
Reviewed in the United Kingdom on March 28, 2016
Verified Purchase
must read for all coaches and teachers
Read more
Report abuse
See all reviews
Back to top
Get to Know Us
Make Money with Us
Amazon Payment Products
Let Us Help You
EnglishChoose a language for shopping. United StatesChoose a country/region for shopping.
© 1996-2021, Amazon.com, Inc. or its affiliates