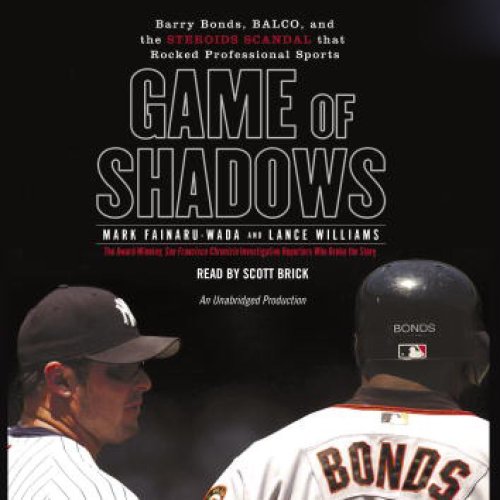 List Price: $27.93
You Save: $3.49 (12%)
By completing your purchase, you agree to Audible’s Conditions Of Use
Sold and delivered by Audible, an Amazon company
Share

4.5 out of 5 stars
4.5 out of 5
246 global ratings
How are ratings calculated?
To calculate the overall star rating and percentage breakdown by star, we don’t use a simple average. Instead, our system considers things like how recent a review is and if the reviewer bought the item on Amazon. It also analyzes reviews to verify trustworthiness.
Top reviews

Craig Wood
4.0 out of 5 stars The smoking gun
Reviewed in the United States on April 5, 2011
Verified Purchase
It's not so much that Fainaru-Wada presents the smoking gun -- by the time you finish this book it feels like you've seen an entire smoking armada. Overall, it's fairly compelling stuff. Using evidence from hundreds of sources, the authors implicate Barry Bonds and numerous other athletes for their involvement in the BALCO doping scandal of the early 2000's. It's disappointing but eye-opening reading for anyone who got swept up in the excitement of the great homerun achievements of a decade-plus ago.

The authors of this book assert that Barry Bonds took steriods for several years, and was fully aware that he was doing so. The former is fairly obvious, as supported by tons of documented evidence. It's the latter that's more difficult to prove. But that doesn't stop them from trying. To be sure, Bonds has a foul personality. But I couldn't help wondering whether his personality flaws contributed to the authors' reaching conclusions that they otherwise may not have reached.

Helpfully, Fainaru-Wada and Williams don't dedicate the entire book to Barry Bonds. They also devote chapters to other big-time athletes, many of whom subsequently admitted to taking steriods. It paints a sobering picture. Sadly, Victor Conte, the disgraced BALCO CEO, was probably right. Professional athletes had little choice during that era: use dope, or lose out to those that do. That may have been the case, but it's just as well that the prevalence of doping has gradually been exposed by books like "Game of Shadows" and others, and the higher-ups who control the sporting industry have been forced to finally do something about all of the cheating.
Read more
5 people found this helpful
Helpful
Report abuse

Richard Lyman
4.0 out of 5 stars When Arrogance Exceeds Ability
Reviewed in the United States on July 26, 2007
Verified Purchase
As Barry gets closer and closer to breaking the incomparable record that Hank Aaron set, Game of Shadows becomes even more relevant. The authors go into great clinical detail of Bond's drug regimen that was obtained thru leaked grand jury testimony. I find it extremely ironic that the lawyer who leaked the information is going to jail for two years while Barry (as well as Scooter Libby) remains free.

Page after page, all the dates, dosages and drugs are listed. No, this isn't a Tom Clancy novel. It reads more like a medical textbook. Those who proclaim Bonds "innocent until proven guilty" status should read those chapters and then look at the physical changes Bonds went thru in that time frame. His personal trainer is still in jail for dealing steroids and Victor Conte, Bonds "nutritional advisor," just got out of jail. Sorry, but flaxseed oil and pumping iron won't transform a human into the grotesque being Barry has become. And they won't make your hat size increase, either. Anybody who thinks Bonds gained all that muscle "naturally" probably also believe O.J. continues to search every golf course in the country for his wife's killer.

How can a man who never hit more than 46 home runs in a season (when he was 28) suddenly average over 51 home runs a year between the ages of 35 and 40? What, did Ponce de Leon spike the water cooler? What other player in history has shown that remarkable improvement in the tail end of his career?

Does Barry get a bad rap from the press? Is he being picked on? Bonds is a baseball player of remarkable ability, a rare combination of speed and power that were easily enough to get him into the Hall of Fame without drug abuse. His ego, and his arrogance, however, far exceeds his natural talents. As described in the book, jealousy over Mark McGwire's adulation drove him to take performance enhancing drugs. Bonds figured he would level the playing field by juicing like Mark. Then we'll see who's the best. Breaking the single season home run record was not enough for his grandiose personality. Now he has to break the record set by one of the most dignified and honest people in sports. As Rick Reilly puts it, when Barry breaks the record, it will be "like a man robbing a bank and then having a giant party to watch him count the money."

The book isn't just a beat down on Barry. Many other athletes are exposed, particularly in track and field where undetectable doping is so vital to cheating the system. Unlike baseball, track and field takes doping very seriously. Sure, Barry has never tested positive for steroids, but when was he tested? Baseball did not even start testing until 2002. For two years, the tests were anonymous and results were not released. Only in 2004 were penalties invoked for testing positive. What a joke. Let's not forget, there is no test for human growth hormone, which is likely what Bonds continues to use to maintain his bloated musculature.

It is July 26, 2007. I will make a few predictions. Bonds breaks the record in mid-August. The hapless Giants have no post season and Barry fades into anonymity for a few weeks. After the World Series in which the Mets beat the Red Sox (sorry Boston fans), Bonds gets indicted for perjury, obstruction of justice and tax evasion.

The tax evasion charges will stick, they always do. Anytime you have an outflow of cash to a mistress or drug dealer, the source of that cash can be traced. It will be baseball card and autograph show cash that was never reported as taxable income. Barry will get convicted and do a little time, just like the other talented egoist, Pete Rose.

And maybe like Pete, Barry will get into the Hall of Fame, posthumously.
Read more
4 people found this helpful
Helpful
Report abuse

WryGuy2
4.0 out of 5 stars A Sad Tale of a Man Who Wanted Too Much
Reviewed in the United States on October 19, 2009
Verified Purchase
Game of Shadows, by Mark Fainaru-Wada and Lance Williams, tells a factual story of of how Victor Conte, the founder of BALCO, rose from being a self-proclaimed nutritionist to being the steroid supplier of choice to a large number of world-class athletes across a multitude of sports. Along with Conte himself and the cast of characters involved with BALCO, either as users, suppliers, or competitors, the story focuses on baseball player Barry Bonds.

Mr Fainaru-Wada and Mr Williams detail how Barry Bonds was apparently jealous of the attention Mark McGuire (probably a steroid user) received when hitting a record-breaking 70 home runs during the 1998 season. Mr Bonds, per the book, successfully turned to steroids to become the greatest hitter of his generation, and perhaps even of all time, at an age when virtually all baseball players are in severe decline.

The irony here is that even if Barry Bonds had prematurely retired instead of beginning to use steroids, his performance to that point would have still been good enough to merit being voted into the baseball hall of fame, probably on the first ballot. Instead, assuming he's guilty (and the book presents reams of evidence in support of that guilt), he tarnished his reputation and legacy for all time, will not receive due credit for the bulk of his career when he was clean, and may never be voted into the hall of fame.

The book also includes interesting description of how steroids help improve performance, and what some of the side effects and health problems that are likely to result from steroid use.

This is a good book and I recommend it.
Read more
2 people found this helpful
Helpful
Report abuse
See all reviews

Niall
5.0 out of 5 stars Fascinating
Reviewed in the United Kingdom on January 1, 2013
Verified Purchase
Sports drug-testing really was a mess at the turn of the century and this book shows how easily a chancer like Victor Conte could subvert the system and assist athletes like Marian Jones, Dwain Chambers and most famously (allegedly, of course, should his solicitors be reading this) Barry Bonds to cheat their way to success.

Aside from his general unpleasantness, this fantastic book (written by two good old-fashioned investigative journalists) strips Bonds down to the insecure, bullying thug who will forever have an asterisk against his name. Hall-of-famer? Please, no. Anyone who thinks otherwise should read this great book.
Read more
Report abuse

Edmund Kemper
2.0 out of 5 stars Naive and prejudiced author
Reviewed in the United Kingdom on December 1, 2017
Verified Purchase
Book had some interesting facts and stories but I did not like author's naive and prejudiced attitude toward PED users. Is it really a huge shock to us that professional athletes use PEDs?! Come on!
Read more
Report abuse

Lean 1
5.0 out of 5 stars Buy it!
Reviewed in the United Kingdom on September 11, 2015
Verified Purchase
A very interesting read. Lots of detail on Balco and Victor Conte. It's fascinating how it all fits together and the different athletes get involved in doping and PED's. Marion Jones, Barry Bonds, Dwain Chambers and plenty more household names. Particularly relevant with the current headlines involving Paula Radcliffe, Monday Farah etc. Highly recommended!
Read more
Report abuse

Mr Stephen Robert McDonald
5.0 out of 5 stars Five Stars
Reviewed in the United Kingdom on October 8, 2015
Verified Purchase
Really good read
Read more
Report abuse
See all reviews
Back to top
Get to Know Us
Make Money with Us
Amazon Payment Products
Let Us Help You
EnglishChoose a language for shopping. United StatesChoose a country/region for shopping.
© 1996-2021, Amazon.com, Inc. or its affiliates