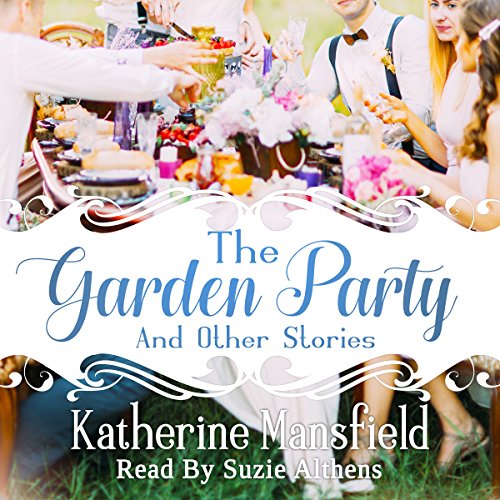 The Garden Party and Other Stories

Katherine Mansfield was a master of the short story. With characters in psychological struggles resulting in a major life shift or revelation, her style influenced contemporary and friend Virginia Woolf as well as modern authors including Alice Munro. These stories were written between 1920 and 1921, while she was ill with tuberculosis. She died in 1923 at the age of 34.

Special invitation from Audible!
Learn more about Membership
List Price: $15.70
You Save: $1.71 (11%)
By completing your purchase, you agree to Audible’s Conditions Of Use
Sold and delivered by Audible, an Amazon company
Share

4.2 out of 5 stars
4.2 out of 5
38 global ratings
How are ratings calculated?
To calculate the overall star rating and percentage breakdown by star, we don’t use a simple average. Instead, our system considers things like how recent a review is and if the reviewer bought the item on Amazon. It also analyzes reviews to verify trustworthiness.
Top reviews

Hannah C.
5.0 out of 5 stars WOW
Reviewed in the United States on April 12, 2019
Verified Purchase
This book is just simply beautifully written, it is a compilation of short stories, so it is very easy to read.
Read more
2 people found this helpful
Helpful
Report abuse

Annie
4.0 out of 5 stars stories
Reviewed in the United States on September 5, 2013
Verified Purchase
Enjoyed this read very much. Characters were made to come alive. Found myself wishing the stories were longer to know more about how their stories went on.
Read more
3 people found this helpful
Helpful
Report abuse

Anne Doyle
5.0 out of 5 stars Love it
Reviewed in the United States on March 22, 2014
Verified Purchase
Loved this book as I did the last one. Her short stories keep one coming back for more. Think she's wonderful
Read more
2 people found this helpful
Helpful
Report abuse

Barbara Hubbell
1.0 out of 5 stars One Star
Reviewed in the United States on March 13, 2015
Verified Purchase
Not my cup of tea
Read more
Helpful
Report abuse

Betsy Robinson
5.0 out of 5 stars Brilliant writing, daring in any era
Reviewed in the United States on March 12, 2018
Katherine Mansfield lived from 1888 to 1923, but she would have been revolutionary in any era, and she is an obvious predecessor to John Cheever and Shirley Jackson in their tradition of exposing the underbelly of families and working men. This collection of fifteen stories and sketches illustrates class differences and tensions in 1910s–'20s Europe, and Mansfield manages to straddle the shallowness culturally required of women in the time and what lies underneath it. (Don't read the preface until after you read the whole book—it reveals stories' endings.) I enjoyed the free-flying nature of the writing. The title story is the real tour de force, but the whole book is worth reading—particularly if you are interested in the early twentieth century upper-crust sound and customs.
Read more
4 people found this helpful
Helpful
Report abuse

My Novelesque Life
4.0 out of 5 stars A perfect book for your nightstand!
Reviewed in the United States on August 14, 2016
THE GARDEN PARTY AND OTHER STORIES
Written by Katherine Mansfield
1922 (reissued AUGUST 9, 2016); 304 Pages
Ecco
Genre: short stories, prose, fiction, classics

(I received an ARC from the EDELWEISS in exchange for an honest review.)
​​
★★★★

I have probably read Mansfield before in high school or university but I cannot remember at this point. At least, the stories in this novel did not spark a connection. Yet, Mansfield's writing feels familiar. I really enjoy the way she brings characters to life and gives the reader a sense of the time and place where these characters live. I read this book over two days picking it up when I had short spurts to read. I would say this is a good book for the nightstand when you need to read but don't have the time to give a novel a chance. I am looking forward to reading more of Mansfield.
Read more
7 people found this helpful
Helpful
Report abuse
See all reviews

Karen
5.0 out of 5 stars What a treat!
Reviewed in the United Kingdom on June 15, 2017
Verified Purchase
I can't believe that I have never read Katherine Mansfield before-and knew so little about her. These Short stories are all beautifully observed cameos of Humanity. The descriptive writing is superb and in each "golden nugget" the reader is transported to the inner world of the protagonists- young and old; rich and poor. Each story leaves you with a lasting image, like the very best poetry.
Read more
Report abuse

L. Mealing
5.0 out of 5 stars Reliable Seller
Reviewed in the United Kingdom on September 10, 2018
Verified Purchase
Arrived on time. Book as described - just perfect for me.
Read more
Report abuse

MusicaMan
1.0 out of 5 stars Very Small Booklet
Reviewed in Canada on September 6, 2021
Verified Purchase
Smaller than my hand with my fingers spread out. Disappointing.
Read more
Report abuse
See all reviews
Back to top
Get to Know Us
Make Money with Us
Amazon Payment Products
Let Us Help You
EnglishChoose a language for shopping. United StatesChoose a country/region for shopping.
© 1996-2021, Amazon.com, Inc. or its affiliates