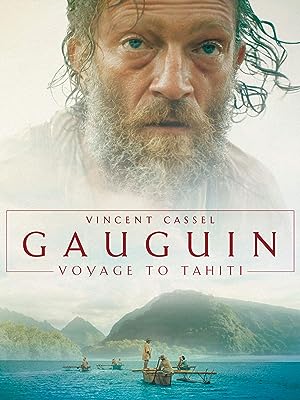 (112)5.91 h 40 min201816+
Paris, 1891. Painter Paul Gauguin ventures alone to Tahiti. Impoverished and solitary, he settles deep into the Tahitian jungle, where he meets the Maoris and Tehura, his muse, who will inspire his most iconic works of art.

John P. Jones IIIReviewed in the United States on September 24, 2021
5.0 out of 5 stars
To the ends of the earth…
Verified purchase
… as Tahiti was once considered to be. His fellow artists and drinking buddies in Brittany used the subject expression to indicate his destination. After the first 15 minutes of this movie, in which Gauguin is in France, suddenly we see a haggard Gauguin painting in his hut, while it rained, in Tahiti. He would paint prolifically, and even obsessively, often on the make for blank canvas. Edouard Deluc directed this excellent film, which was released in 2018. Vincent Cassel does an admirable job of playing an often beat up man, Gauguin, while Tuhei Adams plays his muse, and paramour, Tehura.

Gauguin “went native” as it were, deciding to go up onto the plateau of the interior and live with people that, to me, were highly reminiscent of the tribal people in the Central Highlands of Vietnam. No doubt because both were from the same Polynesian stock. By contemporary standards it was a crime that he would commit. But then it was a normal and customary practice. He was in his 40’s. Tehura’s mother offered him her 15-year-old daughter, with assurances that she could be returned if he was not completely satisfied. It worked, at least for a while, and he was obsessed with painting her.

He couldn’t make a buck, or a franc, or even a sou, it seemed. No one wanted his paintings. He also carved statues. There is a scene of Gauguin pathetically trying to hawk one of his carved wooden statues to the French colonials. Even a muse must eat. Gauguin is reduced to performing young men’s work, as a docker or longshoreman, unloading boats and carrying the goods on his back. The muse’s eyes wander to more contemporary men.

This movie is only a slice of his life. The first 20 minutes or so show his life with his European family of many kids and his relationship with the French artists in Brittany. The rest of the movie was the 3-4-year period he was in Tahiti with Tehura, 1890-93. It ends when he is repatriated to France as a pauper. It does not show his extensive relationship with Vincent van Gogh before he went to Tahiti. It also does not show his return to French Polynesia, to the even more distant end of the world, the Marquesas, which are 900 miles from Tahiti. He would die there in 1903, a poor, broken man. Also not shown is Picasso “discovering” him in 1906 and being heavily influenced by him. Picasso’s famous “Les Demoiselles d’Avignon,” completed in 1907, is directly attributed to Gauguin’s influence.

The composition of the scenes in this film is so impressive. Again and again, the scenes are as well done as a painting, with the attention to the light, the framing, the depth of field, et al. I wondered how many “takes” it took to get it just right. It is brilliant cinematography.

Gauguin, a troubled man whose genius was not recognized in his lifetime has left an impressive legacy for all humankind: a new way of seeing. For Deluc’s vision of that slice of Gauguin’s life, 5-stars, plus.

Amazon CustomerReviewed in the United States on January 14, 2020
5.0 out of 5 stars
Beautiful Cinematography
Verified purchase
This film had some of the best cinematography I've seen in films, this film is particularly beautiful visually. Also, I thought for what this movie is portraying, it was very thoughtful and well-done. You felt what the characters were feeling and I think it was a very good portrayal of Gaugin's time in Tahiti. I would recommend it, I enjoyed watching it. It was actually better than I thought it was going to be.
2 people found this helpful

M.L.Reviewed in the United States on October 6, 2020
5.0 out of 5 stars
Paradise Lost forever...
Verified purchase
This film does have Amazing cinematography like other reviewers on here have stated but Vincent Cassels performance as Paul Gauguin is what Really moved Me and the few scenes of him painting and making little wooden sculptures are Very Captivating and hold the viewers interest and this is a Brilliant Haunting film with a great Choir soundtrack that stays with you after the film has ended, Amazing Movie about the life of a Maverick Artist who died alone in poverty :(

ASReviewed in the United States on February 12, 2020
5.0 out of 5 stars
Beautiful movie
Verified purchase
This was a beautiful cinematic work of art. Beautiful cinematography. The story was engaging from the very beginning and held my interest all the way through. The actors were excellent. It gives a glimpse into the life of the great artist Gauguin.
One person found this helpful

Amazon CustomerReviewed in the United States on October 22, 2020
1.0 out of 5 stars
Depressing
Verified purchase
I learned very little about the artist. Overall very depressing. And of course they didn't touch on all the controversial issues with Gauguin. They also made Tahiti look very unpleasant, undesirable.
2 people found this helpful

WynReviewed in the United States on January 23, 2021
4.0 out of 5 stars
Lots to absorb visually, excellent screenshots, interesting to say the least!
Verified purchase
Loved this movie but the focus was more on his problems, it seemed, than why he had these problems. His lack of respect for himself is obvious but I think this is every artist's struggle from that time period and around it. Amazing accounting of his works though. Vincent's performance was impeccable!

MichelReviewed in the United States on November 25, 2018
5.0 out of 5 stars
Superb scenery.
Verified purchase
This is a slice of life of Gauguin's life when he goes to Tahiti. The photography of this film is amazing.
6 people found this helpful

SherrythereReviewed in the United States on January 26, 2019
3.0 out of 5 stars
I ONCE WAS LOST...
Verified purchase
... AND NOW I'M EVEN MORE LOST. A DEMONSTRATION OF THE FINE LINE BETWEEN PRESUMPTIVE GENIUS & A-HOLE.
3 people found this helpful
See all reviews
Back to top
Get to Know Us
Make Money with Us
Amazon Payment Products
Let Us Help You
EnglishChoose a language for shopping. United StatesChoose a country/region for shopping.
© 1996-2021, Amazon.com, Inc. or its affiliates