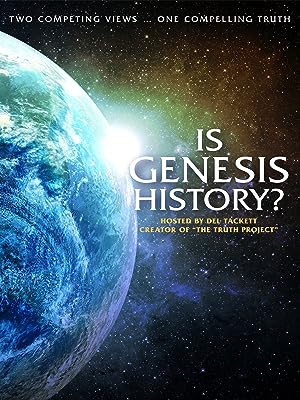 (3,143)4.21 h 44 min2017NR
Is Genesis History? is a fascinating new look at the biblical, historical, and scientific evidence for Creation and the Flood. Learn from more than a dozen scientists and scholars as they explore the world around us in light of Genesis.

BibliophagistReviewed in the United States on April 9, 2018
5.0 out of 5 stars
Excellent, science-driven exposition of intelligent design v the theory of evolution
Verified purchase
Finally, someone who allows science to answer those nagging questions left by the incomplete, narrow-minded evolution-only viewpoint! As a product of public education, I often came out of science classes wondering why the conclusions drawn by evolutionists left me with more questions than answers. Now I see it's that those teachers weren't willing to suspend their disbelief in the possibility of intelligent design long enough to consider that their dogmatic belief in chance was obscuring science itself. Del Tackett poses those tough questions to real scientists who are willing to consider all of the facts from a truly scientific viewpoint, ruling out what doesn't make sense based on empirical evidence and probability. This is such a refreshing, eye-opening exposition of how science not only supports a young earth theory, but also exposes evolution as a theory based more on faith than facts.
97 people found this helpful

Lily’s GrammyReviewed in the United States on August 2, 2017
5.0 out of 5 stars
Is Genesis History, I do believe it is!
Verified purchase
I was always skeptical of the origins of man and how that played in the face of scientific evolution. Once I saw this film, I am more than ever convinced that only God created us. The evidence put forth here for argument against evolution is straightforward and easy to comprehend. The flood that Noah experienced explains the existence of man and dinosaurs at the same time. Wonderfully filmed and inspirational. Believers will be ever more steadfast in their faith by hearing the proclamations of learned scientists. Unbelievers, well, if they aren't a tad inclined after seeing this, they will need to be moved to faith another way. But miracles happen....
81 people found this helpful

PatrickJReviewed in the United States on June 26, 2018
5.0 out of 5 stars
The Best Dialogue on Creation Ever
Verified purchase
This is perhaps the most balanced and fact / science based presentation on creation I have ever seen. The credibity of the scientists and their research back up the basis for God being the author of the universe. This movie makes a connection between historic events of creation that make a lot more sense than “Big Bang.” Something from nothing...how, unless your God.
52 people found this helpful

R W MunsieReviewed in the United States on July 1, 2018
5.0 out of 5 stars
So well put together and beautifully done.
Verified purchase
I could write on this for a while. It is amazing. The quality of this production is top notch. The way they cover the material is concise and clearly produced. This will hopefully open many people's eyes to the fact that we've been fed one narrative on our origin and told it is the only narrative. By putting on a different pair of glasses and re-examining the data, we can see that science really does support creation over random chance. You can't just watch this once. It's amazing.
37 people found this helpful

MapleReviewed in the United States on February 4, 2021
1.0 out of 5 stars
this is a biased movie
Verified purchase
I had hoped for a thoughtful contrast presenting both views between creationism versus evolution,
I did NOT find it. It was evident from how things where presented that the host had one view, creationism.
I am so disappointed in this. The one sided presentation was unfair to the audience. The producers of this show were no better than someone presenting only the other side of the argument.

Radical Rick from near Butler Univ.Reviewed in the United States on July 2, 2018
5.0 out of 5 stars
AWESOME!!
Verified purchase
AWESOME!!!!

Watched this numerous times. Then bought for our small group. Showed our post-college age children and shared some more.

Gives you a whole new perspective on the age of earth or the lack there of...

20 people found this helpful
See all reviews
Back to top
Get to Know Us
Make Money with Us
Amazon Payment Products
Let Us Help You
EnglishChoose a language for shopping. United StatesChoose a country/region for shopping.
© 1996-2021, Amazon.com, Inc. or its affiliates