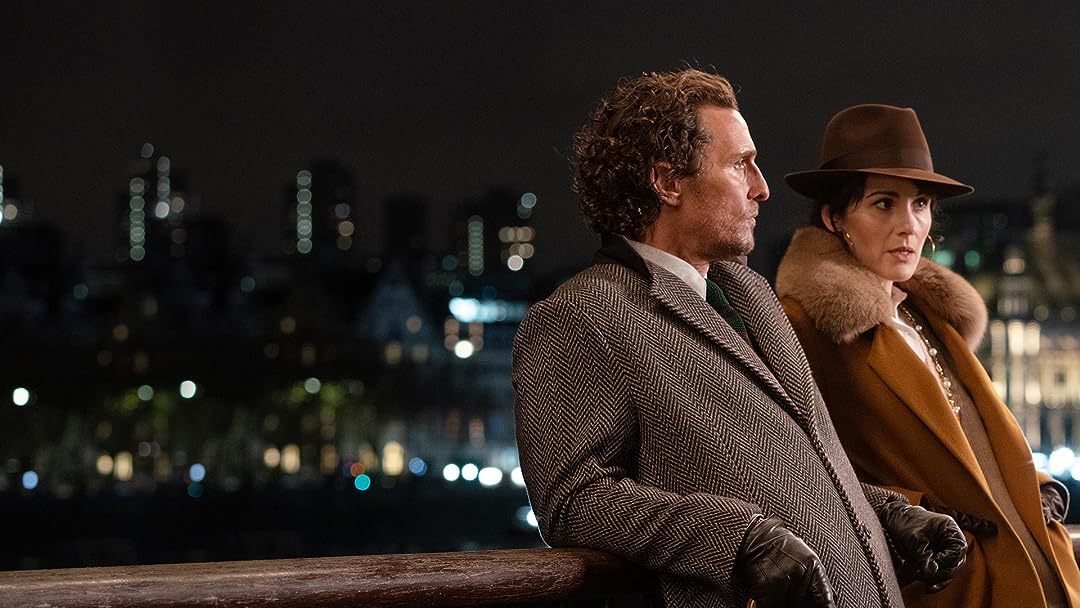 (55,837)
7.81 h 53 min2020X-RayHDRUHDR
A British drug lord tries to sell off his highly profitable empire to a dynasty of Oklahoma billionaires.

ThatGuyReviewed in the United States on August 31, 2022
5.0 out of 5 stars
Entertaining, better than the preview
Verified purchase
I had watched the preview a few times and wasn't that interested. A friend asked if I had seen it and I had not. He suggested I give it a try. One day, tired of flipping through things to consider watching, I gave it a go. It was actually a good movie with some twists. It was worth the time to get lost in a story for a couple hours. Its not something that will win an Oscar, but it is something if you like this kind of movie that will entertain.

M. OlesonReviewed in the United States on September 12, 2020
4.0 out of 5 stars
4 1/2 stars. A British crime film with many moving parts and lots of wit.
Verified purchase
This is one of those movies that came out before the Covid 19 outbreak but I still took a pass on. Director and writer Guy Ritchie’s early movies like “Lock, Stock and Two Smoking Barrels” and “Snatch” always left me scratching my head, primarily because I couldn’t understand what the characters were saying in their cockney accent. Later movies like “Aladdin” (haven’t seen) and “Sherlock Holmes” (please one was enough) play to a larger audience but lack some of the moxie from the earlier films. “The Gentlemen” plays it somewhere in between. Yes, some of the characters maintain a cockney accent but it is softer and two American actors (Matthew McConaughey and Jeremy Strong) are in key roles which helps as well.

The story opens with one of the main characters appearing to have been killed. We quickly learn that this is a story in some respects fabricated by a character named Fletcher (Hugh Grant) who is currently working for Michael “Mikey” Pearson (McConaughey) in his weed growing empire in England. Fletcher has aspects of being a movie producer/director/writer and is using his experiences to create a screenplay. So the film is told in flashback as Fletcher is attempting a bit of blackmail against Mikey’s right hand man, Ray (Charlie Hunnam).

One of the better aspects of the film is that it is quite a good story, one with lots of surprises, twists and turns but also one can follow if you’re paying attention. Mickey is an American who went to Oxford but quickly learned he can be more successful sell marijuana which is called “bush” instead of pot as near as I can tell. Mickey and his wife Rosalind (Michelle Dockery) are looking to get out of the business. Rosalind has her own high end custom car business she owns. Mickey has been approached by another American named Matthew (Strong) and they agree on a price of 400K (pounds or dollars I can’t remember). Mickey has set up a string of growing operation on 12 estates throughout the country that are owned by the upper crust of society. In return Mickey pays each 1 million pounds a year.

Matthew indeed wants the business but wants it for a lot less money. So a plot unfolds whereby plans are in place to accomplish that. Make no mistake, while this is clearly a crime film with plenty of dead bodies it is also comedy at its darkest. In one scene a man falls to his death and Mickey asks Ray if he or one of his guys killed the man, Ray replies, “No, gravity killed him.” In a late scene, one of the characters is drugged up and commits an unspeakable act which has been filmed as a blackmail ploy. When other characters are watching it, someone says, “You can never unsee that.”

Bottom line, I loved this movie. It has many moving parts but they all come together in the end. Henry Golding, Colin Farrell, Eddie Marsan have supporting roles and they are excellent. Hugh Grant has never been better. Highly recommended.

CHDReviewed in the United States on October 2, 2022
5.0 out of 5 stars
This will be a classic
Verified purchase
Great movie. Great cast. Great writer & producer...this movie will be a classic

AndrésReviewed in the United States on September 14, 2022
5.0 out of 5 stars
Great watch
Verified purchase
I watched Snatch many years ago and enjoyed it a lot. The Gentlemen did not disappoint. I rarely watch movies, but I wholeheartedly think this was a very good film.

Adam SchroederReviewed in the United States on September 25, 2022
5.0 out of 5 stars
Great movie
Verified purchase
Hands-down, one of the best

DonaldReviewed in the United States on August 18, 2022
4.0 out of 5 stars
Very Entertaining
Verified purchase
Good story, well done in all areas.

Ben G.Reviewed in the United States on September 1, 2022
5.0 out of 5 stars
Supporting Characters
Verified purchase
It's just a fun movie but the supporting characters make it great. Might be some of Colin Farrells best work... especially in recent memory.

G E ProctorReviewed in the United States on June 10, 2022
4.0 out of 5 stars
Digital Code is an iTunes exclusive
Verified purchase
Great packaging and delivery speed. A phenomenal movie, with plenty of tongue in cheek characterization and witty banter for many rewatches. The huge con: To redeem the digital code through iTunes, was such a nightmare, that I eventually gave up and purchased an additional digital release from Vudu.
See all reviews
Back to top
Get to Know Us
Make Money with Us
Amazon Payment Products
Let Us Help You
EnglishChoose a language for shopping. United StatesChoose a country/region for shopping.
© 1996-2022, Amazon.com, Inc. or its affiliates