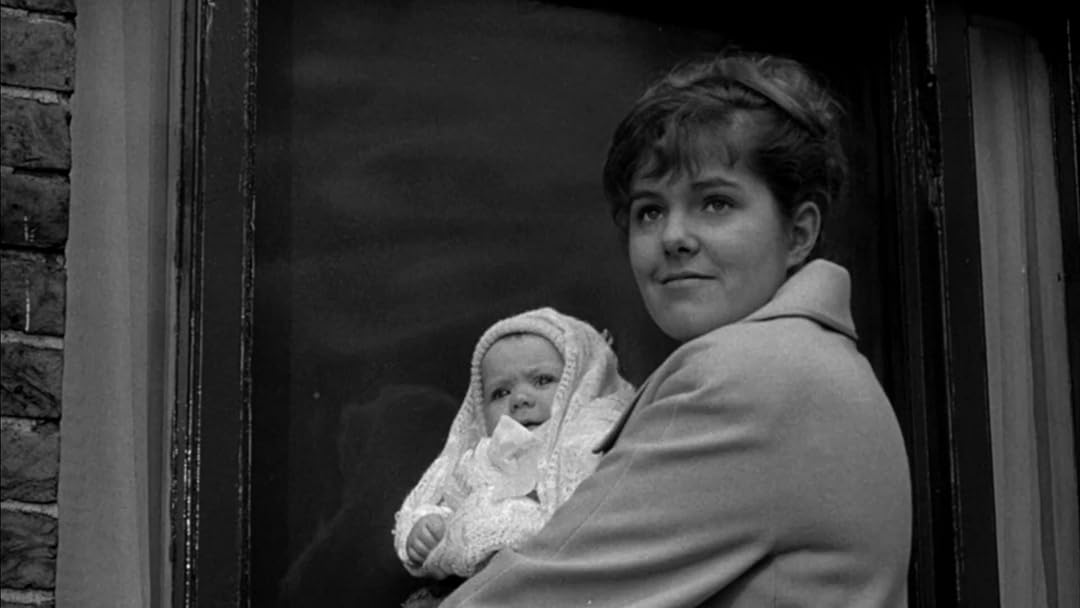 Mark N.Reviewed in the United States on July 7, 2019
5.0 out of 5 stars
Georgy Girl is a delightful, and sometimes dark, comedy-drama-romance. One of Britain's best!!
Verified purchase
I love this movie and especially Lynn Redgrave, who is the epitome of a down to Earth "tom-girl". The character "Georgy" played by Redgrave is a fun loving, carefree, but multi-layered and talented, 22 years young British woman who is being pursued by her parents long-time employer, 49 year old, James Learnington (James Mason) who very attracted to Georgy, allows her to teach a music appreciation class for children in his mansion. Mr. Learnington, who is still married to his deathly ill wife, wants to marry Georgy after his wife passes away , which she does in short order. Georgy lives with her very attractive, shallow, hedonistic female flatmate Meredith (Charlotte Rampling). Meredith's on and off boyfriend Jos Jones (Alan Bates) has an attraction to Georgy and that's played out as two antagonists who finally consummate that attraction. Meanwhile Meredith discovers she is pregnant and is convinced by Georgy to not abort and let Georgy help raise the baby. There is much playful and sarcastic banter intermixed with three main characters (especially between Georgy and Jos) as they edge towards the birth of the baby. The character Meredith is so well played by Rampling that you feel nothing but repulsed by her behaviour. The character Jos Jones is frenetic, pushy and very attractive in an odd way. But the character Georgy "owns" the screen with what appears to be little effort. James mason needs no accolades. He is, without a doubt, one of Britain's finest actors. The ending was a surprise the first time I had seen this movie, which was over 40 years ago. This film is up there with other great, British films from the 1960s including "A Taste of Honey", "Victim" and "The Loneliness of the Long Distance Runner" to name a few. An absolute "MUST HAVE" for your collection!!
14 people found this helpful

Thinker3Reviewed in the United States on November 22, 2022
3.0 out of 5 stars
A Metaphor for the 60's: Sometimes fun, mostly dreary
Verified purchase
I watched this film because I remembered the song from the 60’s and always wondered about the film it came from. Oddly, what I thought was a description of the film on Amazon’s page turned out to be its end. So you know where this one is going, though it takes the whole film to get there. It’s sometimes fun getting there, but mostly dreary. There's lots of clowning around and some snappy dialogue. Georgy is musically talented and witty, but physically unappealing. Her roommate Meredith is a run around. Meredith’s boyfriend, Jos, is equally irresponsible. But when Meredith gets pregnant, the two marry to have the child--Jos never wonders whether the child is his. Georgy happily takes care of both of them in the apartment they all share. Meredith immediately hates the baby and exits to return to old party life. Jos, who has meanwhile fallen in love with Georgy, takes longer, but he too exits. Only Georgy cares about the baby. Desperate to keep the baby, she marries her benefactor. Meredith and Jos are mostly fun. Georgy is not. But she cares for them and for the baby in something of the way that her benefactor has cared for her. The film is a metaphor for the 60’s: you can have your fun if you want, but that can’t combine with a really responsible life. For these folks, it’s a choice. Hard to imagine any of them in 20 years—except Georgy.
One person found this helpful

johnfReviewed in the United States on April 15, 2016
4.0 out of 5 stars
A time piece of the Sixties but still funny as ever.
Verified purchase
If it weren't for the song by The Seekers, a major hit of late 1966-early 1967, one wonders if this film would be as well known as it still seems to be. Georgy Girl was one of the new British comedies that mostly replaced the old "kitchen sink films" as Britain not only came out of its long postwar recovery but also found itself a center of the new pop culture of the Sixties. Films like The Knack, Morgan , Darling, Georgy Girl and even Blow Up,showed a new, hip Britain centered on London rather than the North Country and thnat recent phenomenon, Swinging London, often intruded itself into them.

Such is Georgy Girl, a comedy that mixes the household of wealthy James Leamington (James Mason)with the daughter of his manservant and her swinging roommate. At the mansion, James has a sick wife who spends most of her time in bed, while his servant and sometimes drinking friend Ted runs the household. His daughter, Georgy , teaches a dayschool for young children upstairs but lives in her own flat. georgy is rather overweight and frumpy, but gets along wonderfully with children, which seems to be her calling. She has self confidence and image issues as shown by the hilarious intro, accompanied by the title song in which she gets a fashionable new hairdo only to undo it in the Underground ladies room. Her situation is complicated by the fact that she lives with a drop dead gorgeous, Mary Quant clad roommate, Meredith (wonderfully played by newcomer Charlotte Rampling), who is perpetually bored and complaining. At the same time Georgy finds herself pursued by Mr. Leamington and getting closer with Meredith's carefree, clownish boyfriend, Jos (Alan Bates)

It's the cast that really makes this film. James Mason is perfect as the unhappy and frustrated Leamington, a master British actor at the peak of his form. The young trio were all fairly new at this point, which makes it particularly special that they worked so well together as an ensemble. It's definitely from another time. i wonder how many people now will find Leamington's attraction to Georgy "inappropriate" in today's atmosphere, especially since James Mason was made up to look at least ten years older than he was. Though Georgy is intended to be an entirely sympathetic character, some people today think she can only relate to children and has difficulty with adults. How times change.

This still is a worthwhile film, and the comedy is timeless enough to make it as funny today as it was in 1966. The song was not just a theme son but is heard here and there throughout the film commenting on the plot and characters.

Delta D.Reviewed in the United States on April 24, 2020
3.0 out of 5 stars
Promising start, but declines into second-rate kitchen sink
Verified purchase
The start was impressive. A large proportion of the population, male and female, presumably feel like Georgy when young: overlooked in favour of one's more good-looking friends. This was well conveyed up front, although Lynn Redgrave's character - described in the dialogue as 'big and ugly' and 'just short of being beautiful' - was rather better looking than ideal for this concept.

Alas, the film declines into second-rate kitchen sink. There's squalid living conditions, lack of affection in the various intertwined relationships and a dirty old man encouraged in his pursuit by Georgy's uncaring father.

I shan't plot spoil, but the ending is a bizarre hybrid of kitchen sink and feelgood.

I don't see myself revisiting this any time soon.
2 people found this helpful

Tony D.Reviewed in the United States on November 8, 2015
5.0 out of 5 stars
The title of this movie become part of the language ...
Verified purchase
The title of this movie became part of the language for the generation who grew up in the 1960s. The words "Georgy Girl" have a guttural impact on us. There is no trying to match the title to a vague image in your mind of a movie seen long ago. No. To us, the words "Georgy Girl" elicit a response that can only be described as a backward somersault in your mind.

However, we don't always no why we respond that way.

Then we remember the face of Georgy.

The humanity we see in her face is a reflection of our own humanity. It's the humanity we've learned to suppress so well as we've grown up and old.

Lynn Redgrave opened a window to her soul in that movie, and when we look in, we see ourselves.

Angela MagnanoReviewed in the United States on September 7, 2022
5.0 out of 5 stars
charming
Verified purchase
lynn redgrave is charming in this movie...good story-- funny and sad....good ending and of course the song georgy girl by the seekers is wonderful
One person found this helpful

moonchildReviewed in the United States on April 18, 2020
2.0 out of 5 stars
Used DVD nto worth the risk
Verified purchase
This is a movie I remember really enjoying as a child. I purchased it some time ago but just got around to watching it. Unfortunately, about half way through it freezes up and I have been unable to get it to start again, It always freezes in the same place. This is the second time this has happened with used DVD's I have purchased from Amazon. I will only be purchasing new DVD's from here on. Unfortunately that limits the selection, but as they say, Buyer Beware.
2 people found this helpful