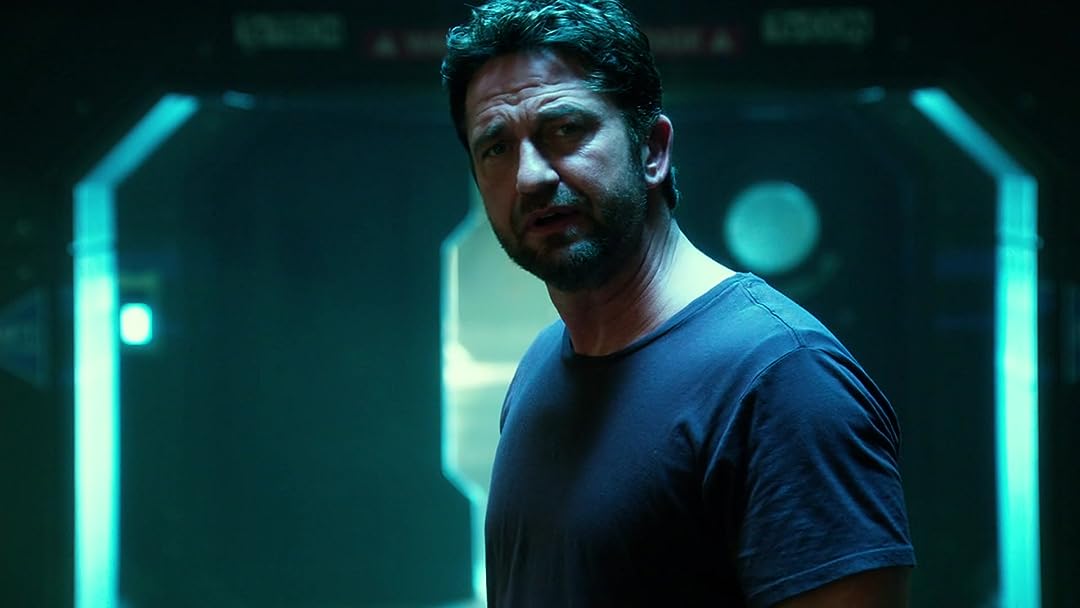 (10,536)
5.32017X-RayPG-13
Something's wrong with the satellites that control climate and prevent devastating natural disasters. It’s a race to uncover the threat before a worldwide geostorm engulfs the planet.

RichReviewed in the United States on February 6, 2018
4.0 out of 5 stars
You're going to either love this or hate it!
Verified purchase
This is a disaster movie and I don't think many people will like it. I did! I love mindless action flicks. I'm not going to say much more than that. I hate critics who beat down movies like this. You should know what you're going to be watching by the name alone and know it's going to be fun and dumb. Now, if you think it sounds like an Oscar worthy name, you should probably have your head examined. I recommend this movie to people who are like me and just want to chill out watching good actors/actresses entertain us with a fun disaster movie.
125 people found this helpful

Linda B.Reviewed in the United States on March 18, 2018
4.0 out of 5 stars
Fun ride
Verified purchase
What you enjoy is personal and personally i think a lot of people tend to be hypercritical. This was a fun disaster movie. I was entertained and i felt good at the end. It's not supposed to be real or based in fact because its not a documentary. I had a small twinge when people were getting taken out left and right but the main characters just sailed right through but i got over it because if they died the movie would end abruptly. Critics say its predictable but did you think the earth was really going to be destroyed? They said it was political. Do you really need a firm belief in global warming to enjoy a disaster movie? When it comes to suspending believability I had more of a problem watching any of the XXX movies. When it comes to movies that dont make sense i think Cloud Atlas. This was simple fun. If you want to overthink it don't watch it.
43 people found this helpful

ZacharyReviewed in the United States on September 7, 2018
1.0 out of 5 stars
Don't even waste your time
Verified purchase
This movie is trash. Disaster movies are usually trash but they can be fun, this is a bit different. Movies like Independence Day or 2012 lived and died by their visual effects. This movies special effects are on the level of something like a Pureflix film. The acting is atrocious, especially from that guy who's supposed to be Gerard Butler's brother. The kid who's playing Gerard Butlers daughter, her dialogue is super weird it's like that character was meant to be his girlfriend originally but they decided to change it to his daughter last minute without rewriting the script. All of her lines seem like something a smart ass, world weary 30+ year old would say. The plot is predictable with zero twists or turns. The worst thing about this movie is that it's not even funny bad, it just stinks.
26 people found this helpful

GuinnessFanReviewed in the United States on June 26, 2018
4.0 out of 5 stars
Much Worse Than It Had Any Right to Be (Okay, a LITTLE Worse than it had any right to be.)
Verified purchase
ORIGINAL REVIEW:
This movie gets two stars instead of one, only because the special effects seem reasonably competent. The acting wasn't really a problem. The production values are fine. The special effects are fine. But this movie is just so badly written; such complete schlock and so over-the-top sappy that it distracts from anything good that happened in its production. It steals from other sappy movies (Independence Day, 2012, et al) to such an extent that it is almost a parody. In fact, it would have been a much better movie if they had made it a parody (like Mars Attacks). But it was clearly not intended to be that, which just made it a parody of itself. Any conformity to actual scientific principals are virtually non-existent/completely accidental. As far as science goes, the writers/producers were clearly of the mindset, "Science!? We don't need no stinking science!" Even the special effects are flawed in that they are clearly just randomly sprinkled in. It seems like the whole movie consisted of a bunch of special effects exercises with a McStory (TM) built around it to show off those special effects snippets. A quick google search tells me that this movie had a budget of around 120 million dollars. With that much money, they should have been able to tell a much more coherent story. The sad thing is, this movie gives a bad name to an entire sci-fi sub-genre - disaster movies. We may not see another big budget disaster film for many years because of the producers of this film, and for that, I despise them.

UPDATE 1:
I had to give this one a second look because I thought I might have been a little too harsh after the first viewing (during which I may or may not have dozed off momentarily). Okay, it's not as bad as two stars. The sappiness is still there, but the story line does actually hold together reasonably well for a disaster sci-fi movie. But the acting of most of the supporting characters was just awful: Jake's "team" on the space station and the computer nerd that Max recruits to help him, all act like idiots as characters (bad direction), and just act poorly as actors (bad acting school?) The main characters, including Jake's daughter (super sappy/wishful thinking narration notwithstanding) actually displayed pretty decent acting skills. As for my complaints about the science, that still stands... sorry, but if I see one more space shuttle fly around in space like a fighter jet, I'm gonna hurl! I'm okay with suspension of disbelief, but that doesn't include abandoning the basics of aeronautic science. I was willing to let it slide in Armageddon, but I would hope we've all grown up a little bit since then.

UPDATE 2:
I hate it when I'm wrong, but I'll admit it... I was wr-wr-wr-wr... wr-wr-wr... wr-wrong. And Robert (see comment below) is right. I still stand by my criticism of some of the supporting acting, and it's still a bit cheesy, but I'll be darned if I don't have to boot this one up AGAIN to four stars. One pretty good thing about it is that it stands up well to repeated viewings. The story line don't stink that bad and the main actors are all pretty top notch (as you would expect from the all-star cast.) I give it my recommendation.... Yes, you have my permission, and I won't think less of you, to buy this movie. (I know you were waiting for that.)

D.L.Reviewed in the United States on January 10, 2018
3.0 out of 5 stars
A B-movie at heart, just with a bigger budget
Verified purchase
I don't think this movie quite deserves all the hate that its gotten. It's competently directed and makes no pretentions as to what type of movie it is, which is a B-movie, just with a bigger budget. I thought the acting was fine with Gerard Butler doing his flawed, rugged-everyman performance that he's perfected in almost every movie he's in. The major criticisms I had was that I was able to figure out the bad guy right away and that the movie should have taken more time to explain the weather satellites and their functionalities as the space scenes were easily the most interesting part in the film. Still, this did not dampen my experience and more than fulfilled my intentions of just sitting back and watching a big, dumb action thriller without involving much thought.
66 people found this helpful

ShiningStarLightReviewed in the United States on June 8, 2019
5.0 out of 5 stars
Enjoyable
Verified purchase
I thought the movie was quite entertaining. I'm not sure what the criticism is about. It's a fictional movie. If you're looking for a more scientifically accurate film this isn't it, but it doesn't need to be that's why it’s fiction like most movies. The actors and actresses did very well in this film. The main characters drove the piece. It has a storyline that everyone can easily follow and great visual effects. If you like these types of natural disaster films, that we pray never come to pass in actuality, yet find them fascinating to watch then you'll like this film. If your a 2012 or Day After Tomorrow fan this is your kind of movie.
13 people found this helpful

Juston with an OReviewed in the United States on May 26, 2018
1.0 out of 5 stars
If this movie wasn't a favor then the actors should be sorry
Verified purchase
This movie had to be a favor. It wasn't good. It almost seemed like an attempt to retread "The Day After Tomorrow" but change the story so that the "storm" was caused by some sort of rogue man-made weather system. My 11-year old kid liked it, so maybe it's a good fit for kids.
14 people found this helpful

old_MKReviewed in the United States on March 22, 2020
5.0 out of 5 stars
I even like pretty bad disaster flicks, but this one is pretty darned good!
Verified purchase
Action, romance, a little swashbuckling, some family issues, women portrayed (correctly!) as strong & capable, got some of the good guys / bad guys wrong, so not totally predictable, some more action, I was totally engaged! So, great movie for me!
I do NOT feel the need to scan for inconsistencies, bad science, etc., when I watch a movie - I'M LOOKING TO BE ENTERTAINED!!! Some people can't suspend their disbelief in order to get enjoyment from a movie, but I don't have that issue. If there are glaring problems here, don't expect to hear about them from me. I had fun; this was a great purchase for me, and a movie that I will watch again & again. Worth every penny! Very feel-good at the end, which I generally INSIST on! Real life is hard & ugly enough, with unhappy endings often enough. I want movies to give me a little hope for humanity, which my everyday dealings with human beings don't always do!!!!
5 people found this helpful
See all reviews
Back to top
Get to Know Us
Make Money with Us
Amazon Payment Products
Let Us Help You
EnglishChoose a language for shopping. United StatesChoose a country/region for shopping.
© 1996-2021, Amazon.com, Inc. or its affiliates