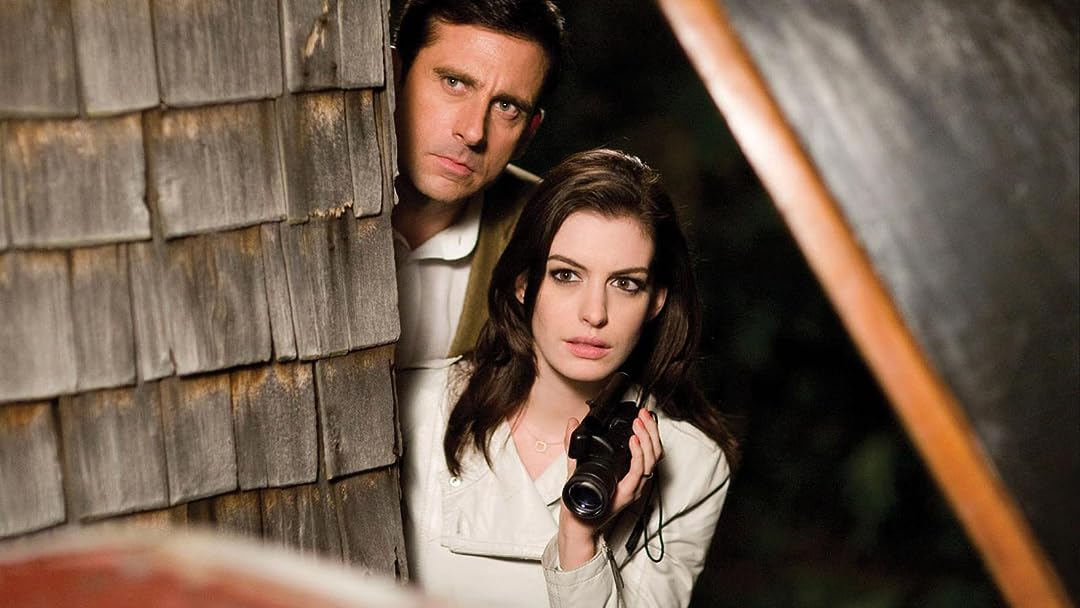 (3,312)
6.51 h 49 min2008X-RayPG-13
In the world of covert intelligence, only one man is Smart. Maxwell Smart, the novice agent often out of his depths but never out of options in this action comedy.

joel wingReviewed in the United States on October 4, 2020
2.0 out of 5 stars
It's a failed comedy
Verified purchase
Get Smart was an adaptation of the famous 1960s TV show which was a spoof of the spy genre. The U.S. government’s secret CONTROL organization was attacked by CHAOS and most of its agents were wiped out. That forced it to use its remaining agents to try to save the world. That included employing Maxwell Smart (Steve Carell) who was an analyst who had never gone out in the field and Agent 99 (Anne Hathaway). Just like the TV show Smart is the bumbling idiot while 99 is the seasoned veteran. They form the classic odd couple for the story.

The problem with the film is that the laughs are few and far apart. The writers just failed at making this a comedy. I mean they tried, but they just couldn’t pull it off.
C

Jack KimReviewed in the United States on November 9, 2017
4.0 out of 5 stars
A Funnier, 21st Century Maxwell Smart??
Verified purchase
Well, that's up to you to decide for yourself, but as a fan of the original series starring Don Adams and Barbara Feldon, this movie was a lot better than I expected.

Obviously the series in the 60's is a classic, and probably many fans would think what I am saying is sacrilege, but Steve Carell is a comic genius in his own right, and although he has a different take on the Agent 86 character than Adams did so perfectly back in the day, Carell is hilariously funny in this film, and his supporting cast of Anne Hathaway (Agent 99) and a new character The Rock (Agent 23), are great comic foils, as well as funny in different ways as well.

This film holds to the campy humor of the original series as well, but what I like about the new "Get Smart" movie is the fact that a lot of the humor expands the boundaries of the original, and there are also some dramatic moments as well, for example, when Agent 86 has to deal with the disappointment of again being denied that sought-after promotion to field agent, he so badly wanted.

Lot of twists and turns, great action sequences, and a well-written script. Again, if you are a diehard fan of the 60's series, you will not be seeing a duplicate of that here, but then again, this is new century, so that is to be expected.

I'm actually surprised there was never a sequel to this movie, but that has more to do with the box office than anything else I'm sure.

Great way to spend a couple hours, if you want to just relax, laugh, and munch on some popcorn.

All Around Handy 'Man'Reviewed in the United States on October 13, 2020
5.0 out of 5 stars
One of the few funny remakes
Verified purchase
I am not one for remakes. I think Hollywood has run out of ideas or they just are lazy. But this movie is really funny. I love Steve. He just has that loveable funny charm about him. I completely get his humor. Steven and Ann have really great chemistry and each brings a balance to each other they rely on. Great supporting cast. I did not like the twist with the Rock. It made no sense for him *SPOILER* to be working for the bad 'guys/girls.' This is a family fun movie that avoids sex, drugs, and bad language typically found in Hollywood. Not sure why anyone finds that funny. Two thumbs up!
One person found this helpful

KeithReviewed in the United States on April 20, 2017
5.0 out of 5 stars
Gotta love the shoe phone!
Verified purchase
Love the shoe phone! For whatever reason, this item didn't go over well commercially, and lately it's been fairly cheap ($6-8) from third party sellers. I sent three to relatives as a "hey, let's keep in touch" gift, and they loved the it. Another relative begged me to send one! And if you loved the original Get Smart, you'll probably love the movie. It starts with Max as an analyst, explains his improbable move to agent, and does a fairly faithful job paying homage to many of the TV show's original themes and tropes. While Max and 99 are the main characters, it is truly an ensemble effort, so there really aren't any thin spots from character myopia. I don't know if it was scripted or improvised, but watch for the best line: "Thanks for jumping."
7 people found this helpful

Billy HollisReviewed in the United States on July 12, 2011
4.0 out of 5 stars
Would you believe... one of the all-time greatest comedies? No? Would you believe...
Verified purchase
Would you believe that it's a pretty funny movie for a casual evening's entertainment? If you like Mel Brooks style slapstick, that's exactly what it is.

These folks took a page from the Mission:Impossible crew on how to translate an old TV show to a decent movie:

1. Have a decent budget for a good script and good effects.

3. Respect the things that made the original special.

4. If the theme song is a recognizable, well-composed classic, keep it.

I'm not really a fan of Steve Carell, but he's pitch-perfect as Maxwell Smart. His deadpan delivery is spot on.

I am fans of Anne Hathaway and Alan Arkin, and they both turn in good efforts. I've like Anne since The Princess Diaries, and Alan since he captured the enigmatic Yossarian in Catch 22 (forty years ago!).

Ex-athlete actors can be a risk for pushing the cheesiness factor too far, but Dwayne Johnson does reasonably well here. His entrance is quite funny, and even though his character is supposed to be a prima donna type, he never hogs the spotlight.

Terrence Stamp is an underappreciated talent - the Christopher Lee of his generation, as far as I'm concerned. He's the ideal choice for the super-villian Siegfried, and has the line in the movie that made me laugh hardest:

Siegfried's assistant: Too bad about all the dead movie stars.
Siegfried: Yes. What will we do without their razor-sharp political advice.

The original series was created by Mel Brooks and Buck Henry, and they were brought in as consultants on this effort. I think this helped get the right feel for the characters, not to mention the running jokes from the original series ("Would you believe...", "Sorry about that, Chief.", "Missed it by that much.", Etc.), which are not overdone and generally integrated nicely into the dialog without being too forced.

There are some flaws. A few scenes do go on too long. The "get past the criss-crossing lasers" scene and the chase scenes at the end are the best examples.

Seriously, this isn't a top-ten all time comedy. But it was funny. I'm sure some don't like the slapstick, and it is quite easy for slapstick to slip over into cheesy and boring. But I don't think that happens here.
21 people found this helpful

D. AlbinsonReviewed in the United States on July 4, 2016
4.0 out of 5 stars
A great job by the stars, a few big laughs and a smile throughout in a film that pays a nice homage to the original.
Verified purchase
As a fan of the original Get Smart series with Don Adams and Barbara Feldon, I think it could've been even less funny and I'm would have still enjoyed it. I love the humor and the tone of the originals and this movie tries to stay with both, at least as much as you would expect from a mainstream movie that's trying to also be enjoyable for people who have never seen the original series. The opening sequence is there as well as the closing. There is also some good stunt work that is done in a skydiving scene and in a car chase scene, among other places. For fans of the original, you will really enjoy this, probably wishing for more references but be satisfied with what they did. If you have never seen the original (like my wife), this is a great way to Get Smart to what the original series was all about with two great stars of the Big Screen. A very good job, as you would expect from Steve Carell and a great job by Anne Hathaway, whom I think is in even better shape than she normally is for this movie, doing a few little stunts that make you say "wow go Anne!" The only caveat is I believe the Amazon rental version is not the exact same as the theatrical version, having seen both there was a part or two I remember from the theaters that was not in this version, but not enough to take away from the movie or be a big issue. After we watch the movie they were links to IMDb data on goofs, trivia, etc. which was nice to read right after watching the movie. Also, at the end of the credits it said For Don Adams and another star. While it would've been even greater to see that at the very beginning of the credits it was a nice touch. A big thank you to Mel Brooks Buck Henry, Don Adams and the rest of the original think tanks and brilliance that made it such a great show, the current writers and stars and for God putting them here when he did. Get Smart and God Bless! :)
2 people found this helpful

Kindle CustomerReviewed in the United States on October 28, 2018
4.0 out of 5 stars
It's not PC. So look out
Verified purchase
I giggled, I laughed, I enjoyed a film with predictable pretenses and dare I say more than a few laughable "stereotypes". I LOVe how there is an actual mocking of Hollywood political views in the movie. To that I say .."I digress".

I assume this movie, and all other movies will be banned in the near future. "Go find "real" jobs Hollywood." Because you are putting yourselves out of business.

We are headed towards a steral society where we can not laugh at ourselves.

An individual can never be a stereotype.

Enjoyed the flick. On a Saturday night. Nothing else to say.
3 people found this helpful

meReviewed in the United States on October 14, 2018
2.0 out of 5 stars
REALLY HARD TO WATCH
Verified purchase
The very last scene was the best. They really should have over acted and made it corny like Barbara Feldon and Don Adams who made the original TV show what it was. The TV series was near 3 Stooges formula genius of timing, good editing and slap-stick. Steve Carell and Anne Hathaway didn't pull it off and make it the comedy it could have been. I guess they and the director tried to make it their own an it never will be. This was just painful to watch 3rd rate remake that missed the mark. Boring! Too bad.
2 people found this helpful
See all reviews
Back to top
Get to Know Us
Make Money with Us
Amazon Payment Products
Let Us Help You
EnglishChoose a language for shopping. United StatesChoose a country/region for shopping.
© 1996-2022, Amazon.com, Inc. or its affiliates