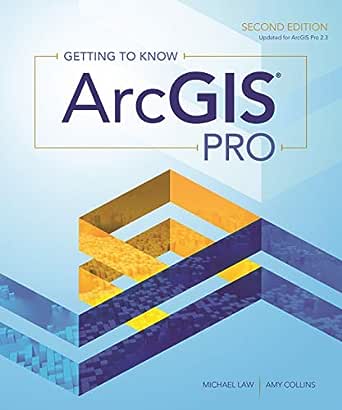 Michael Law has worked professionally with GIS since 2004 when he began at Rand McNally Canada and later worked as a cartographer for Esri Press, where he developed cartography for books, and edited and tested GIS workbooks. Now based in Toronto, Canada, Law continues to work with GIS software, writing technical documentation, teaching training courses, and designing and optimizing user interfaces.

Amy Collins was first introduced to GIS in 2002 when she began working as a technical editor at Esri. There, she honed her GIS skills and cultivated an interest in designing effective instructional materials. Now a writer and editor based in Northern California, she continues to develop GIS materials, among other projects. Law and Collins are the authors of two editions of Getting to Know ArcGIS for Desktop.

4.1 out of 5 stars
4.1 out of 5
25 customer ratings
How does Amazon calculate star ratings?
Amazon calculates a product’s star ratings based on a machine learned model instead of a raw data average. The model takes into account factors including the age of a rating, whether the ratings are from verified purchasers, and factors that establish reviewer trustworthiness.
Top Reviews

mappo
3.0 out of 5 stars good textbook for Intro to GIS type course, not for those who already knows GIS
Reviewed in the United States on May 11, 2019
Format: PaperbackVerified Purchase
This is a textbook intended to accompany an "Intro to GIS" type course that incidentally uses ArcGIS Pro as the accompanying software , and it works well for that purpose. It is not a book to teach you the ins and outs of ArcGIS Pro: if you already know GIS and are looking to learn Pro, this isn't the book for that.
Read more
6 people found this helpful
Helpful
Comment Report abuse

jpm
5.0 out of 5 stars A Must Read for New ArcGIS Pro Users
Reviewed in the United States on October 30, 2019
Format: PaperbackVerified Purchase
I have used ArcMap for several years but did not do a lot with it. The learning curve for ArcGIS Pro is pretty steep if you are not a GIS professional. I followed the exercises in this Tutorial and now have significantly expanded my mapping skills. I still go back and refer to the book for hints on how to do the more complex things but I would not have gotten to square 1 without this book.
Read more
2 people found this helpful
Helpful
Comment Report abuse

Sommer Meyer
3.0 out of 5 stars Good for exercises in the book, but not much else
Reviewed in the United States on December 28, 2019
Format: PaperbackVerified Purchase
A good overview of ArcGIS. Made the exercises easy to do. However, it's not great for learning how to actually USE ArcGIS, just doing the exercises. It doesnt explain a lot beyond what's happening for the exercises and certain tools are very difficult to find because the glossary and index are useless.
Read more
One person found this helpful
Helpful
Comment Report abuse

jane.
5.0 out of 5 stars Definitely a textbook
Reviewed in the United States on March 22, 2019
Format: PaperbackVerified Purchase
I had to buy this for a class. Pretty easy to order and quickly arrived. Exactly as expected.
Read more
Helpful
Comment Report abuse