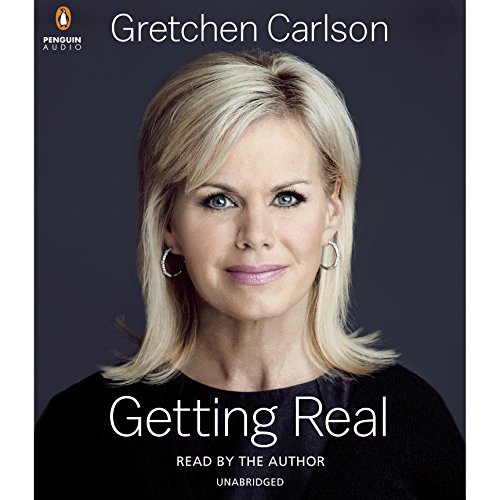 Gretchen Carlson (Author, Narrator), Penguin Audio (Publisher)
4.4 out of 5 stars 228 ratings
See all formats and editions
Sorry, there was a problem loading this page. Try again.

In the wake of Gretchen Carlson’s lawsuit against former Fox News chairman and CEO Roger Ailes, her memoir of her time at Fox - working alongside Megyn Kelly, Bill O’Reilly, Steve Doocy, and other prominent conservative news personalities - is more relevant than ever.

In this candid memoir, celebrity news anchorwoman Gretchen Carlson shares her inspiring story and offers important takeaways about what it means to strive for and find success in the real world. With warmth and wit, she takes listeners from her Minnesota childhood, when she became a violin prodigy, through attending Stanford and later rising to anchor of The Real Story with Gretchen Carlson on Fox News after working her way up from local television stations. Carlson addresses the intense competitive effort of winning the Miss America Pageant, the challenges she’s faced as a woman in broadcast television, and how she manages to balance work and family as the wife of high-profile sports agent Casey Close and devoted mother to their two children. An unceasing advocate for respect and equality for women, Carlson writes openly about her own struggles with body image, pageant stereotypes, building her career, and having the courage to speak her mind. Encouraging women to believe in themselves, chase their dreams, and never give up, Carlson emerges in Getting Real as a living example of personal strength and perseverance.

Your audiobook is waiting!
Learn more about membership
List Price: $24.50
You Save: $3.55 (14%)
By completing your purchase, you agree to Audible’s Conditions Of Use
Sold and delivered by Audible, an Amazon company

Wanda F. Sewell
5.0 out of 5 stars WOW!!!
Reviewed in the United States on December 17, 2017
Verified Purchase
I was really blessed by reading Gretchen's true life story! She was down to earth and vulnerable. I hope many take the time to read her story and be inspired to share their own!
Read more
Helpful
Report abuse

Cheryl Kloda
5.0 out of 5 stars The Real Gretchen Carlson
Reviewed in the United States on September 8, 2015
Verified Purchase
I have watched Gretchen Carlson on Fox news. For this reason, I wanted to know more about her as a person. I enjoyed reading her autobiography. One interesting fact about her was that she played the violin as a child. She even played with the great violinist Issac Stern. Gretchen Carlson also gave me, as a reader, insight into the Miss America Pagant. The author shows that one can win by talent, and a contestant does not have to be tall to be a winner. She also breaks down the steretype of a Miss America being a superficial person. It was also interesting to read about her career as a news person and about her personal life. In conclusion, I enjoyed reading about the real Gretchen Carson.
Read more
Helpful
Report abuse

Jenny Woldt
1.0 out of 5 stars Wish I had saved my money.
Reviewed in the United States on September 24, 2015
Verified Purchase
I put it down after the first few pages. She likes to stand on her faith, but dedicates the start of the book about how she got revenge on another journalist and felt vindicated by it. Perhaps she missed the scripture where God states that vengeance is his? She then goes on to share how she reads her horoscope, again this would be something that the bible clearly warns against. She is also extremely hung up on making sure you know she was a beauty queen. After the first part of the book, Mean Girls is all that I could liken it to.
Read more
23 people found this helpful
Helpful
Report abuse

vickie
5.0 out of 5 stars She got real
Reviewed in the United States on February 6, 2020
Verified Purchase
She got real
Read more
Helpful
Report abuse

Bernadette Thomas
3.0 out of 5 stars A good read.
Reviewed in the United States on July 23, 2015
Verified Purchase
Gretchen is a sweetheart. She is a lucky girl and had a great family background. She couldn't miss. We need more like her. I wish her well.
Read more
One person found this helpful
Helpful
Report abuse

Seattle Girl
4.0 out of 5 stars Refreshingly candid
Reviewed in the United States on June 19, 2015
Verified Purchase
I really enjoyed this book. I enjoyed hearing of her early career with the violin and especially I was touched by her struggles with infertility. So many people keep that a secret for reasons of shame that they can't seem to accomplish what other people do effortlessly. I enjoyed reading about her job of becoming Miss America with the dedication that she seems to use in other parts of her life. I read this book on a cross-country trip--where I usually have trouble concentrating because of all the background issues: crying babies, request from the flightcrew to pay attention to the safety features, and people climbing over you to leave the seat. Did not have any problem concentrating. This was not heavy reading but it was quite entertaining. I enjoyed finding out more about her journey: from the violin, trying to be a regular kid and fitting in, for the struggles with her weight as a teen. These are all things that I could easily relate to. Miss America, not so much but I enjoyed the behind the scenes look at what goes on with the pageant.
Read more
4 people found this helpful
Helpful
Report abuse
See all reviews