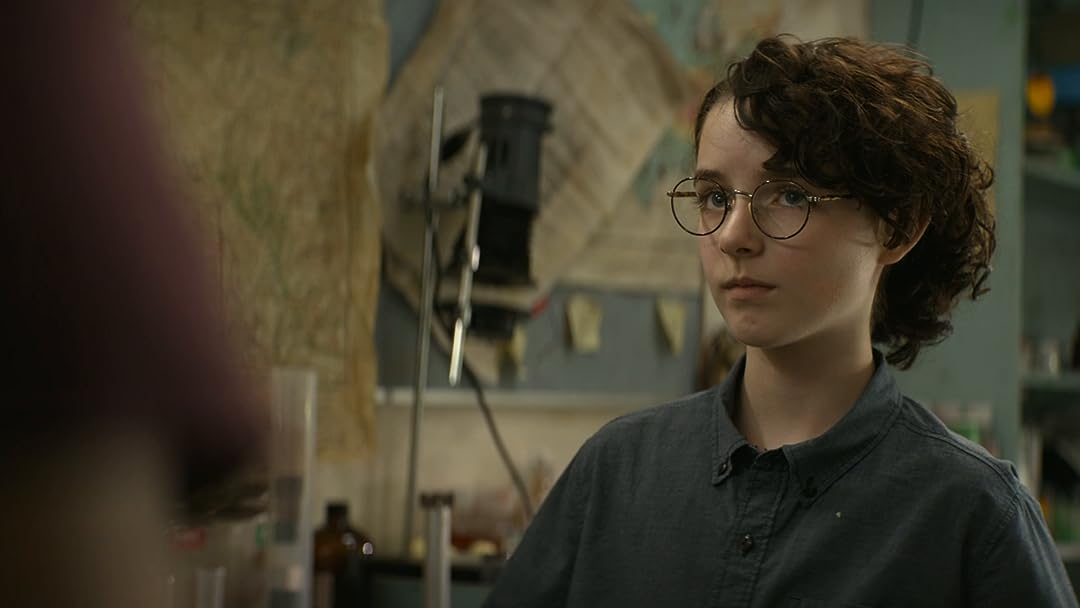 (82,484)
7.12 h 3 min2021X-RayHDRUHDPG-13
When a single mom and her two kids arrive in a small town, they begin to discover their connection to the original Ghostbusters and the secret legacy their grandfather left behind.

Alexander NelsonReviewed in the United States on September 9, 2022
3.0 out of 5 stars
I love Ghostbusters but... Spoiler Alert!!!
Verified purchase
These are things I feel were wrong with the movie.

1. They shouldn't have made the mom a complete moron. If her father was Egon, how did no one else know this? And her age doesn't correlate with the other movies. How does her daughter have high intelligent and no one else?
2. They battle should have been longer and more dire, not so easily won.
3. Finn Wolfhard acted horribly in this movie. It's like he's not even trying to play the role until the end of the movie.
4. Why is the girl who plays Phoebe so sarcastic and weird and rude? Why does she have to have some strange hairstyle just because she's smart? And why do movies use the trope where the highly intelligent person always wears glasses to signify they're smart?
5. Why are all of the people in the town rude, sarcastic, jaded and cynical? I mean everyone is a jerk!
6. It doesn't make sense that there are no government agencies investigating the earthquakes happening daily or the phenomenon. How can no one be inquiring about these incidents?
7. How did Peter know there was cocoa and rum in the house?
8. I know it's a goofy comedy, but why didn't they have a scene where any of the Ghostbusters show the kids how to use the equipment or something? How did Phoebe automatically know how to use the proton pack and other equipment on the vehicle. She's intelligent but now she automatically knows how to use everything just to move the story along? It's supposed to be about passing the torch. But this was lazy writing.
9. Why were there only three ghosts in the movie if the cave was the source of supernatural activity?
10. How did the Ghostbusters know exactly where they were if they didn't know before?
11. Why is there always a trope of having annoying characters, especially kids, in movies? Podcast could have been just a outsider character and didn't have to blow a piercing whistle or other things. Like was this movie more for kids 5 to 10, or for Ghostbusters fans?
12. What is the obsession with Slimer-type ghosts all about? Having these cutest ghosts for children detracts from the story and the movie itself. In the first movie slimer was a messy pest. In part 2, he was a bus driver as a joke. But that ghost in the factory was just to look cutesy and didn't really help the movie. Why didn't they have more ghosts and tougher ghosts to defeat? It was over quickly. It was lengthened to show Egon helping Phoebe but that's it.

I don't know. It feels like lazy writing all throughout the movie. Finn Wolfhard is horrible. He acts like a spoiled, bratty, child actor and it shows in his acting. He just doesn't have real emotions or anything. Notice a difference between his acting in Stranger Things, season one as opposed to season three and four and this movie. The cast is just some weird mix of characters for the sake of diversity and inclusion instead of originality. The town is empty except during one or two scenes. Why didn't anyone in town help or join them to support them? They could have used other people who have skills be there to support the Ghostbusters and the kids and made the Ghostbusters like a newly thriving enterprise instead of this lonely, dying theme whis basically espoused from beginning to end. And from after the fight with Gozer to the last credits scene, it seems like the characters are on the verge of dying and their dialogue is basically a eulogy made during a therapy session. especially Winston's scene. Why didn't they make a stronger movie? I've seen this a few times so that I didn't miss anything and I like Harold Ramis, but this should have been better for the cost of the movie.

SolitaireReviewed in the United States on July 14, 2022
4.0 out of 5 stars
Good time
Verified purchase
Pros:
~Excellent updated special effects and production design that bring the original into the 21st century.
~Cameos by the original stars returning to save the day.
~Grounding the plot in acceptance that what happened in the 80s was absolutely real, and a documented part of NYC history.
~Breathtaking natural scenery, courtesy of the Canadian plains.
~The mini Stay Puft Marshmallow men were priceless. For Whovians, think of the Adipose.

Cons:
~Bill Murray's trademark snark dialed down and translated to sometimes whiny, juvenile characters. What was Dave Madden's line in the pilot episode of "The Partridge Family"? "He's a midget in a kid suit." I find those kinds of scripted hip/ironic movie/show kids highly irritating.
~Having the two main adult characters in the Spengler children's lives being irresponsible flakes. Realize its a comedy trope, but it doesn't work for me.
~Callie's bitterness in general.
~Podcast is just an irritating type, rather than a character.

For the most part, I did enjoy this sequel/reboot of the original "Ghostbusters" franchise. Having Egon's grandchildren become the keepers of the flame was an excellent idea, although I think they made a bit much of the estrangement between Egon and his daughter Callie. Question: if Janine isn't related to the next generation, who is the grandmother and what happened to her?

If there are to be future chapters in the story, I can understand why they spent so much time with exposition in the new location. Excellent seeing the way that details in this version tied into the original film, especially in terms of Ivo Shandor and Gozer. I have to say that Harold Ramis was my favorite of the original quartet, and a good friend was a huge Ramis fan; she thoroughly approved of this iteration. If she hadn't, I wouldn't have had the heart to sit through this. The climactic confrontation was well worth the set up, especially seeing the reconciliation of all the principals. I admit to shedding a tear or two. I think that this was a really fitting tribute to Harold Ramis/Egon Spengler, and I'm looking forward to seeing well written chapters in the future that include the same loving attention to detail and original characters/plot points. Slightly less kid-centric would be perfect. A really enjoyable two hours reliving some of the fun of my 80s youth. The final post-credit moments gave me hope for something awesome in the future.
One person found this helpful

m cReviewed in the United States on September 14, 2022
5.0 out of 5 stars
A MUST SEE FOR ALL GB FANS!
Verified purchase
I rarely take the time to write a review for anything let alone a film but, this film was truly what we have been waiting for since GB 2. The plot of this movie was so masterfully written and fitting. The honor and incorporation of Spengler's character was done so respectfully and beautifully. Hearing the same music and melodies we know from the original GB was a true treat. The child actors who are a whole new generation brought such action, wit and, impact to the film. The node to original ghost characters like Stay Puft and others was also an amazing homage to the original films. I cannot say enough good things about this film. It had me on the edge of my seat and is a film my family and I will add to our home video collection for years to come. Thank you Jason Reitman for following in your fathers footsteps and creating a film OG GB fans have long been awaiting. And than you to Dan Aykroyd and Harold Ramis for creating such a great story that has spanned generations. It was such a treat to see all the original GB's in this film as well. I know we can only give 5 stars but, I would give 10 if I could.

StephenReviewed in the United States on October 30, 2022
5.0 out of 5 stars
Excellent New Beginning
Verified purchase
Plenty of others have left pros and cons so feel free to read those. I'll jump to the chase: If you, like myself, watched Ghostbusters as a youngster and you want a proper, respectful, enjoyable Ghostbusters movie, then this is it. Finally. Is it perfect? Nah. But what it is, is a fun Ghostbusters movie that you could easily add to a re-watch of the previous two. Even better, this has every possibility of being the start to a new, proper Ghostbusters movie series. I for one can't wait.

Lawrence S.Reviewed in the United States on November 18, 2022
5.0 out of 5 stars
Loved it
Verified purchase
I bought this watched it that moment and have watched it like 10 + times already lol. Picks up right after the last one. Great bridge to nestolga and they gave the potential for yet another one too 🤞

SOLO DEMONIC TATTOOSReviewed in the United States on November 21, 2022
5.0 out of 5 stars
Tried to bond
Verified purchase
Ordered it so my mother and i can watch it together and maybe bond but it didnt work oh well 🤷🏾‍♂️

sommadiReviewed in the United States on November 15, 2022
5.0 out of 5 stars
GHOSTBUSTER
Verified purchase
They had me worried after the female ghostbuster release (horrible movie, horrible casting) but this movie is not bad at all and got me liking ghostbusters again

Yes, the first hour is a bit "slower" than some would like, but this was to set the stage for the second hour!

Beyond this point the movie was fun, there was for the fans of the ORIGINAL first 2 Ghostbusters films the nostalgia part which fun because we ALL were in on the "joke" being there when those 2 films ACTUALLY came out so long ago! When the second hour of this film starts going the past picks up very quickly and it never ceases up from that point onward! The Kids did an AWESOME job, the rest of the supporting cast play their parts well and helped the film keep going and by then EVERYONE watching in included in on what's going to happen next - But this all was a GOOD thing! See, the Director of this film (which is in real life the SON of the ORIGINAL Director from so long ago) WANTED to give back to ALL the fans of the FIRST TWO FILMS (not that junk film of 2016) by giving us ALL a well deserved LOVE LETTER FROM EVERYONE WHO HAD MADE THOSE 2 FILMS SO ENDEARING! And he NAILED IT!!!

If you are either buying this film now or are streaming it at home because you were not able to see this movie when it was in theaters you'll LOVE IT!!! And the end... Ah the end, is the BIGGEST THANK YOU TO ALL OF US FANS WHO FOR YEARS WAITED AND WAITED FOR ANOTHER MOVIE TO COME ALONG ONLY TO BE DREADFULLY DISAPPOINTED WHEN THAT "RIP-OFF WANNABE" JOKE OF A FILM DARED TO SHOW IT'S FACE WHEN IT ARRIVED BACK IN 2016!!! YOU WON'T BE DISAPPOINTED THIS TIME... I CAN GUARANTEE IT!!!

And one last thing - All signs point to one simple fact at the end of the movie, the GHOSTBUSTERS ARE BACK and hopefully this time to STAY!!!
3 people found this helpful
See all reviews
Back to top
Get to Know Us
Make Money with Us
Amazon Payment Products
Let Us Help You
EnglishChoose a language for shopping. United StatesChoose a country/region for shopping.
© 1996-2022, Amazon.com, Inc. or its affiliates