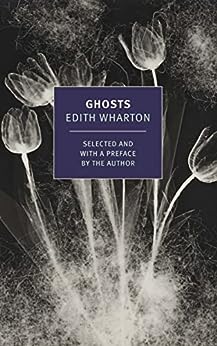 by Edith Wharton (Author) Format: Kindle Edition
See all formats and editions
Sorry, there was a problem loading this page. Try again.
An elegantly hair-raising collection of Edith Wharton's ghost stories, selected and with a preface written by the author herself.

No history of the American uncanny tale would be complete without mention of Edith Wharton, yet many of Wharton’s most dedicated admirers are unaware that she was a master of the form. In fact, one of Wharton’s final literary acts was assembling Ghosts, a personal selection of her most chilling stories, written between 1902 and 1937.

In “The Lady’s Maid’s Bell,” the earliest tale included here, a servant’s dedication to her mistress continues from beyond the grave, and in “All Souls,” the last story Wharton wrote, an elderly woman treads the permeable line between life and the hereafter.

In all her writing, Wharton’s great gift was to mercilessly illuminate the motives of men and women, and her ghost stories never stray far from the preoccupations of the living, using the supernatural to investigate such worldly matters as violence within marriage, the horrors of aging, the rot at the root of new fortunes, the darkness that stares back from the abyss of one’s own soul.

These are stories to “send a cold shiver down one’s spine,” not to terrify, and as Wharton explains in her preface, her goal in writing them was to counter “the hard grind of modern speeding-up” by preserving that ineffable space of “silence and continuity,” which is not merely the prerogative of humanity but—“in the fun of the shudder”—its delight.

“It’s this alertness to the terror of being a stranger in one’s own house, in one’s own self, that makes Wharton such a fine and frightening writer of ghost stories.” —Hermione Lee, The New York Review of Books


“A master of the form. . . . [Ghosts] is a bewitching, and frequently terrifying, collection of tales which more often than not fulfill [Wharton’s] criterion for a successful ghost story: ‘If it sends a cold shiver down one’s spine, it has done its job and done it well.’ . . . Reading the stories, I sometimes felt like I had discovered a hidden room in an impeccable house, and turned to find that the door had shut behind me.” —Anna Russell, The New Yorker

“Wharton seems to have been aware that in her ghost stories, she had tapped into something essential yet hidden about modern life. . . . In Ghosts, Wharton’s characters carry with them not only what was inflicted upon them, but what they have inflicted upon others, however unknowingly.” —Jack Hanson, The Baffler

“These ghost stories are not mere genre, not chills and thrills. They are about the liberty of the form itself. . . . I believe that these macabre stories were, for Edith Wharton, another way out, another departure and yet another entry into the penetrating observations on the destructive powers of human possession, the aftermath of dispossession and the haunting power of love.” —Maureen Howard

“A blend of Poe, Hawthorne and Henry James, [Wharton] has a lightness of touch that belies the often very grisly tale.” —Kate Mosse, The Guardian

“Mysterious and coolly menacing stories of the supernatural.” —Dan Chaon, The Week

Edith Wharton (1862–1937) was an American novelist, short-story writer, and designer. Among the most famous of her many novels are The House of Mirth, Ethan Frome, The Custom of the Country, and The Age of Innocence, for which she received the Pulitzer Prize in 1921, the first woman to do so. In 2007 NYRB Classics published a collection of her short stories, The New York Stories of Edith Wharton. --This text refers to an out of print or unavailable edition of this title.

billofwrites
3.0 out of 5 stars Chilling...but too gentle for horror
Reviewed in the United States on November 24, 2021
Verified Purchase
Atmospheric...and very well-written, of course: it's Wharton. But I found these stories disappointing. Wasn't looking for Stephen King and the author doesn't promise that in her preface. That said: read her great novels instead, especially the under-rated "The Custom of the Country."
Read more
3 people found this helpful
Helpful
Report abuse

Roger B. White
5.0 out of 5 stars Brilliant examples of the genre.
Reviewed in the United States on June 3, 2022
Verified Purchase
Each story has wonderful moments of frisson: NYRB has restored a splendid collection to circulation.
Read more
One person found this helpful
Helpful
Report abuse

Tevin Goss
5.0 out of 5 stars Ghosts!
Reviewed in the United States on May 17, 2022
Verified Purchase
This was a well written fantastic book by Edith Wharton. Each story kept me on the edge of my seat with the supernatural sleuth like stories comprised in this anthology of tales. A must read for anyone who likes to read about ghosts and things that go bump in the night!
Read more
Helpful
Report abuse

The Baking She-devil
5.0 out of 5 stars Victorian Horrors
Reviewed in the United States on May 29, 2022
Verified Purchase
Edith Wharton wrote some of the spookiest stories I’ve ever read. “All Souls” and “Bewitched” are worth the price of the book. And I love horror stories and movies! Get this book!
Read more
One person found this helpful
Helpful
Report abuse
See all reviews