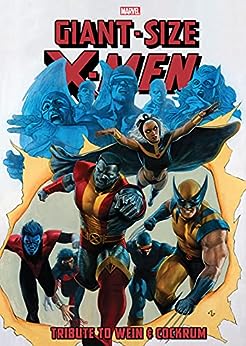 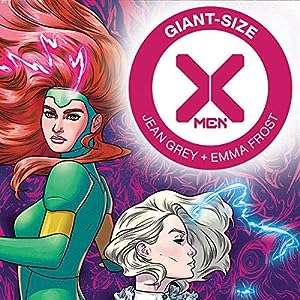 C
TOP 50 REVIEWER
5.0 out of 5 stars A creative tribute to a classic Xmen issue
Reviewed in the United States on August 9, 2021
Verified Purchase
This book contains the “Tribute to Wein and Cockrum” edition of Giant Size X-men, as well as the original version from 1975, and several extra interviews and stories from the artists.

The first part is the Tribute to Wein and Cockrum version; which has 36 different Marvel artists each recreating one page of the art from the original version. All of the original text is the same, there is just different art on each page, as each artist uses their own style to recreate the artwork. I enjoyed seeing all of the different style in one single story, and some of the artwork was pretty impressive.

The next section is the original Giant Size X-men from 1975, will all of the original artwork. It is fun to compare the artwork from this original version, with what the new artists created in the tribute version.

The next part of the book contains interviews with the spouses of Len Wein and David Cockrum. Both of the artists have passed away, but it was nice to read these interviews from their spouses, as they were both asked about how they would like their husbands to be remembered. There is also an interview with Chris Claremont, a legendary X-men writer.

The last part of the book contains a few paragraphs from each of the artists that contributed to the Tribute version. Each artist has one or two pages, where they explain their comic book history and their inspirations, and then describe their choices in the artwork that they contributed. There are some rough sketches and pencils for most of the artists, next to the completed artwork.

Overall, this is a pretty cool book for fans of X-men in general, but specifically fans of the Giant Size book that launched the modern era of X-men. There is some very nice artwork here, and it is a treat to get to read some thoughts from all of the artists. I would recommend this book to any big X-men fan.

Tracie Mauk
5.0 out of 5 stars An awesome celebration of a landmark comic
Reviewed in the United States on December 14, 2021
Verified Purchase
Really impressed with the packaging including the original comic reprinted in its entirety, the tribute issue which recreates the original with today's top artists, and making-of materials for each page giving you a glimpse of each artist's unique processes.