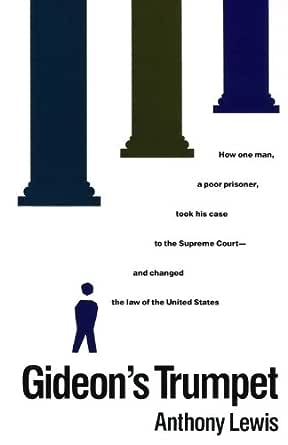 A history of the landmark case of James Earl Gideon's fight for the right to legal counsel. Notes, table of cases, index. The classic backlist bestseller. More than 800,000 sold since its first pub date of 1964. --This text refers to an alternate kindle_edition edition.

Anthony Lewis was a two-time Pulitzer Prize-winning journalist who transformed American legal journalism. He is the author of Gideon’s Trumpet which concerned Gideon v. Wainwright, the 1963 decision that guaranteed lawyers to poor defendants charged with serious crimes. His book Make No Law: The Sullivan Case and the First Amendment is an account of New York Times v. Sullivan, the 1964 Supreme Court decision that revolutionized American libel law. Lewis was a New York Times reporter at the Supreme Court from 1957 to 1964 and wrote an Op-Ed column for thirty years called “At Home Abroad” or “Abroad at Home” depending on where he was writing from . He also taught at the Harvard Law School where he was a Lecturer on Law from 1974 to 1989. He has also been the James Madison Visiting Professor at Columbia University. Anthony Lewis died in 2013 at the age of 85. --This text refers to an alternate kindle_edition edition.

4.4 out of 5 stars
4.4 out of 5
127 customer ratings
How does Amazon calculate star ratings?
Amazon calculates a product’s star ratings based on a machine learned model instead of a raw data average. The model takes into account factors including the age of a rating, whether the ratings are from verified purchasers, and factors that establish reviewer trustworthiness.
Top Reviews

StacyG
5.0 out of 5 stars This is an amazing book
Reviewed in the United States on June 6, 2014
Verified Purchase
I am taking a Modern American Law class this semester, and this book was one of the required texts. The book is deceiving because its size does not reflect the amount of information it provides on every single page. This book and its content fascinated me from page one. By the time you get to the end of this book, you feel as if you've played a major part in this case. This is a fabulous book, and I would definitely recommend it to anyone, law student or not.
Read more
9 people found this helpful
Helpful
Comment Report abuse

PedroCR
4.0 out of 5 stars Actually an interesting book
Reviewed in the United States on December 21, 2017
Verified Purchase
I had to buy this book for a constitutional Law class I was taking in college I had my doubts as to whether this book would be interesting but it actually was a pretty good read I plan to keep it
Read more
2 people found this helpful
Helpful
Comment Report abuse

Ricardo Mio
5.0 out of 5 stars Inspirational writing at its best
Reviewed in the United States on April 1, 2017
Verified Purchase
Clarence Earl Gideon was arrested for a petty crime, and because he couldn’t afford one, asked for an attorney to represent him in court. His request was denied. He was convicted and sentenced to five years in the Florida State Prison. Using a pencil and prison letterhead, he appealed to the Supreme Court for a writ of certiorari. Arguing that the lower court had deprived him of his Sixth Amendment right to have an attorney for his defense and that he had been denied due process under the Fourteenth Amendment, Gideon told the Court that as a layman he was incapable of defending himself.

Gideon’s chance of finding a needle in a haystack was infinitely greater than having his case heard by the Supreme Court. But it was. Gideon v. Wainwright (1963) changed the whole course of American legal history. Gideon’s incredible story, and the story of how the Supreme Court chooses and decides cases, is the subject of this very readable book by Anthony Lewis. Lewis knows the ins and outs of the American judicial system. He was a New York Times reporter who covered the Supreme Court from 1957 to 1964. He also taught law at Harvard from 1974 to 1989.

The Supreme Court receives some 2500 appeals each term (or did so at the time of Gideon’s appeal) of which 150 are actually granted a hearing. “Review by the Supreme Court is in the interest of the law, its appropriate exposition and enforcement, not in the mere interest of the litigants,” the author quotes Chief Justice Charles Evans Hughes. In other words, the Court accepted Gideon’s appeal not out of the goodness of its heart but to address a legal issue. The issue that interested the Court was whether or not criminal defendants tried in state court who were unable to afford an attorney, and not provided one by the state, were being denied their Constitutional rights. In federal court, defendants without means were provided legal counsel by court. Under federal law, it was their Constitutional right. But under state law? That was a different issue all together. The states were not bound by Bill of Rights guarantees. “Our Constitution created a system of dual governments, state and federal, each with its own laws,” writes the author. Tried in a state court, Gideon was not guaranteed the right to an attorney. Fortunately for him, issues of federal law sometimes arise in state courts, and therefore can be appealed, and this was one.

Twenty years earlier, in a similar case (Betts v. Brady, 1942), the Court ruled in favor of the state—an indigent criminal defendant did not have the right to an attorney. By 1962, when Gideon filed his appeal, the makeup of the court had changed significantly (more liberal/more activist) and decided to reexamine the merit’s of the Court’s prior decision. Having accepted Gideon’s appeal, the Court asked one of the top attorneys in the nation (future Supreme Court justice Abe Fortas) to represent Gideon. Working pro bono, Fortas put the expertise of his powerful Washington law firm to work on the case, with no stone left unturned.

The state of Florida, meanwhile, assigned a 26-year-old assistant attorney general named Bruce Robert Jacob to represent the state. He argued that defendants without means were perfectly capable of acting as their own attorney. Indeed, Gideon had done quite well for himself in court, in a losing case. Jacob also made an appeal to all 49 states to file friend-of-court briefs on behalf of Florida. There was one very big problem, however: 23 states favored a new standard of fairness on state criminal procedure. Only two states—Alabama and North Carolina—spoke up for Florida.

The Court’s ruling was unanimous. As with state capital offenses, defendants who could not afford an attorney now must be provided one by the state. Gideon’s conviction was overturned. He was assigned an attorney and his case was retried in a Florida court. This time, he won, and was released from prison.

Gideon v. Wainwright was one of three Supreme Court decisions to significantly alter criminal procedure so that it better protected the rights of the accused. The other two are Miranda v. Arizona (1966) and Mapp v. Ohio (1961). Conservative critics have accused the court in such cases as legislating rather adjudicating the law. Perhaps. But how much longer would it have taken Congress to pass such legislation, if ever?

Justice Walter Schaefer of Illinois has advanced “the relation of the United States to the rest of the world” today as one argument for national standards of criminal procedure. “The quality of a nation’s civilization can be largely measured by the method it uses in the enforcement of its criminal law.” Adds the author, “The Supreme Court is in a strategic position to give voice to national ideals.” Brilliant book.

A. T. Yoshida
4.0 out of 5 stars A Classic Read from a Bygone Era
Reviewed in the United States on December 19, 2014
Verified Purchase
For some reason Lewis' book reminded me, more than anything else, of the classic works of the old DC novelist Allen Drury, who wrote about life in Washington in this era. Most specifically, it does so in the way in which it is filled with confidence in the public men of that city and the institutions of American government itself.

The prose is brisk and clear, as to be expected from a journalist of that era. This is worth reading.
Read more
One person found this helpful
Helpful
Comment Report abuse

Kelly
5.0 out of 5 stars Recommend for Business Law students
Reviewed in the United States on June 25, 2020
Verified Purchase
Had to read this for my Business Law class and it honestly is such a good read! I wasn’t looking forward to reading a book for school but it’s worth it in my opinion. Check Goodreads for the real book reviews, but definitely recommend!
Read more
Helpful
Comment Report abuse

Prof. R. Paris
5.0 out of 5 stars The system works!
Reviewed in the United States on November 3, 2000
Verified Purchase
For those of us who believe that American constitutional law is about the most exciting and stimulating intellectual game, this book is a must. Lewis does a marvelous job and succeeds in maintaining the reader's passionate attention. The bottom line is that the system works, some times late, but it certainly works. I am looking forward to reading Lewis' other book on constitutional history: "Make no law", about the famous case of the New York Times in relation to the First Amendment. In any case, I'd recommend Gideon's Trumpet to all people who believe in the values embodied in the American Constitution. I intend to assign it as required reading in my criminal justice courses.
Read more
8 people found this helpful
Helpful
Comment Report abuse
See all reviews from the United States

Josh LL
4.0 out of 5 stars Highly Informative
Reviewed in the United Kingdom on March 27, 2017
Verified Purchase
This book cleverly uses the narrative of this specific case to showcase and analyse the processes, structures and controversies of the SCOTUS.
Read more
Helpful
Sending feedback...
Thank you for your feedback.
Sorry, we failed to record your vote. Please try again
Report abuse