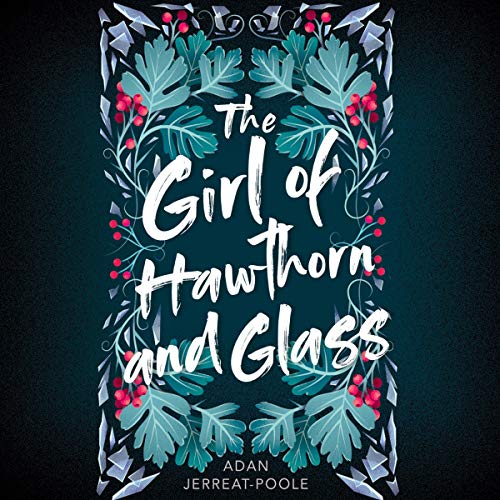 The Girl of Hawthorn and Glass

2.9 out of 5 stars
2.9 out of 5
26 global ratings
How are ratings calculated?
To calculate the overall star rating and percentage breakdown by star, we don’t use a simple average. Instead, our system considers things like how recent a review is and if the reviewer bought the item on Amazon. It also analyzes reviews to verify trustworthiness.

Marzie
4.0 out of 5 stars Imaginative.
Reviewed in the United States on November 2, 2020
Verified Purchase
3.5 Stars bumped because I just don't get all the hating on this novel.

The Girl of Hawthorn and Glass is the debut novel of Adan Jerreat-Poole, is an English Literature PhD (McMaster University), now in postdoctoral studies at Ryerson University in Canada where they study disability issues. This novel is a dark fantasy with elements of sci-fi (other galaxies). It follows the story of Eli, a witch-made girl, composed of hawthorn, glass, and other scary things. Eli is made to be an assassin and is trained in the witch world, called The City of Eyes, to penetrate the human world, The City of Ghosts, to kill ghosts that pose a threat to both worlds. Eli, when we meet her, has been an extremely successful tool for her mother witch, Circenae. Yet, when the Coven sends her on an assignment and she wields one of her seven blades to kill a purported witch, she is horrified to find that she has killed a human instead. Why, if the witches say killing ghosts is to protect the human world as well as their own, have they decided to kill a human? Eli, who lives in fear of being unmade and her parts scattered, tries to cover up this fact. She returns to the City of Eyes only to be turned around and sent on another mission, with little recovering time. This time she finds the ghost she's been sent to slay has long been dead and gone. What, exactly, is going on? As Eli searches for answers and tries to figure out how to satisfy the terms of her impossible mission, she meets Tav, a colorful non-binary character, and Cam, an Uber driver with mysterious links to the witch world. Together they will cross back and forth between the two cities. Eli will discover things about her childhood friends Kite and Clytemnestra, the Coven and its workings, and the damning lack of balance between the two worlds.

The "tool" narrative, where one is created for a purpose and balks at that purpose, has been explored quite a lot, including recently in Jordan Ifueko's Raybearer, but as a trope, it is one with rich opportunities for exploration of personal aegis, the subjugation of personal will, and vulnerability to compulsions. The propulsive action in this novel doesn't allow for a great deal of exploration of some of these issues (we see both Eli and Kite, in particular, are trapped in the webs of their respective roles) and the worldbuilding feels at times like a rough sketch in the beginning. This is a duology, though, and some of the choices made by characters leave open pathways for a deeper exploration of what powers the witch world possesses (we see clear indications in this first book) and the battle between the young and old witches of the Coven. At times the plot felt scattered and some of the characters I wanted to know more about (the young witches Kite and Clytemnestra,and the Hedgewitch in the City of Ghosts) didn't get as much time on the page as I'd like. The abruptness of Eli's encountering first Tav, then Cam, felt a little jarring since this obviously was very out of character for a loner like Eli to suddenly start working with others whose purposes are inscrutable, yet she seems so thrown off her stride by her two disastrous missions at the start of the book that her acceptance of what she hopes is assistance is plausible. In spite of these issues, the novel reads like an imaginative queer fever dream and I enjoyed it. I don't understand the very negative reviews on this book. I look forward to seeing where the story goes in the forthcoming The Boi of Feather and Steel .

I received a digital review copy of this book in exchange for an honest review.
Read more
Helpful
Report abuse

Schizanthus Nerd
VINE VOICE
3.0 out of 5 stars I’m Interested in Reading the Sequel
Reviewed in the United States on October 6, 2020
Eli is a girl of hawthorn and glass. Literally. Her body consists of other substances as well but she’s a made-thing. She’s the perfect assassin, created by a witch to kill ghosts.

“Eventually she would turn back into the parts the witch had used to make her - a girl stitched together out of beetle shells and cranberries and a witch’s greed.”

Eli and her seven blades have never failed before but something goes wrong this time in the City of Ghosts, and she’s terrified of being unmade.

Seanan McGuire says ‘The Girl of Hawthorn and Glass’ is a “unique, gripping, engaging book by a voice that the genre has been waiting for.” Anyone who knows me knows Seanan is my favourite author so if they enjoyed it, then logic says I will as well. I loved the concept and this series has so much potential. Amongst other goodies, there’s magic, witches and a labyrinth.

You know those photomosaic jigsaw puzzles where each piece is its own tiny picture, but when you finish the puzzle you see the big picture? That’s the image I get when I think about the world building in this book, except the big picture isn’t complete. It’s like I was given a bunch of beautiful, strange little pictures, some that read like poetry. However, I didn’t get enough of them to form an overall picture.

I can see part of the Labyrinth, part of the library and the door of Circinae’s house but I can’t imagine the City of Eyes as a whole. I also couldn’t get a clear picture of what Kite looked like.

I wanted to delve deeper into the history of the City of Eyes. Eli, as a made-thing, wasn’t privy to that information herself so it made sense for the reader to go in blind. We learn a small amount of background information when Eli does. If I’d either been given a history lesson earlier or had the opportunity to interact with more of the Coven, I‘m certain I would have been more invested in the story.

As it was, for most of the book, the Coven’s motivation was unknown. Other than some limited interaction with Circinae, the adult inhabitants of this world remained fairly mysterious. Not an alluring kind of mysterious, though. It was more of an ‘I don’t know who these characters are’ mystery. There were also some scenes where I still don’t really know what happened.

I’m pretty sure I stumbled into a couple of plot holes although, to be fair, there is a forthcoming sequel that could fill them. I’d be interested to see how the story concludes in ‘The Boi of Feather and Steel’.

Thank you so much to NetGalley and Dundurn Press for the opportunity to read this book.
Read more
3 people found this helpful
Helpful
Report abuse

Marta Cox
3.0 out of 5 stars Interesting ideas
Reviewed in the United States on October 6, 2020
The beautiful cover caught my eye and then the synopsis was very intriguing as I could almost imagine a Frankenstein type character. Eli is a construct, a thing, a tool and an assassin but Eli is capable of so much more and this is her story. There is without doubt a fairly good representation of LGBTQ+ here but it’s the journey that Eli takes from being proud to just serve to realising that she deserves answers that really pulls the reader along. When sent by the Witch who created her to kill a Ghost in the Human realm everything goes wrong and Eli fears that if it’s discovered she will be unmade. So when yet again an assignment turns out to be a setup Eli discovers that her purpose isn’t quite what she thought it was.
I won’t lie as much as I enjoyed much of this book there are parts that felt confused and it was as if the author was trying too hard to bring metaphysical elements in play. The actual interactions between Eli, Tav and Cam made it feel relevant but when it came to her interacting with the two young Witches that she’s grown up with the prose just got too flowery and I found it difficult to understand why Eli would trust them. The actual explanation as to just why Eli is sent after Ghosts was just too preposterous for me unfortunately and that meant the ending was very unsatisfactory. So in conclusion I can say it has good ideas, I liked the main character but to me it occasionally went off at a tangent that was just too muddled.
This voluntary take is of a copy I requested from Netgalley and my thoughts and comments are honest and I believe fair
Read more
2 people found this helpful
Helpful
Report abuse
See all reviews

stephanie
4.0 out of 5 stars Enjoyed this book
Reviewed in Canada on October 13, 2020
Verified Purchase
The writing is fanciful and prose very visual and imaginative. Characters and world needed a little more filling out.
Read more
Report abuse
See all reviews
Back to top
Get to Know Us
Make Money with Us
Amazon Payment Products
Let Us Help You
EnglishChoose a language for shopping. United StatesChoose a country/region for shopping.
© 1996-2021, Amazon.com, Inc. or its affiliates