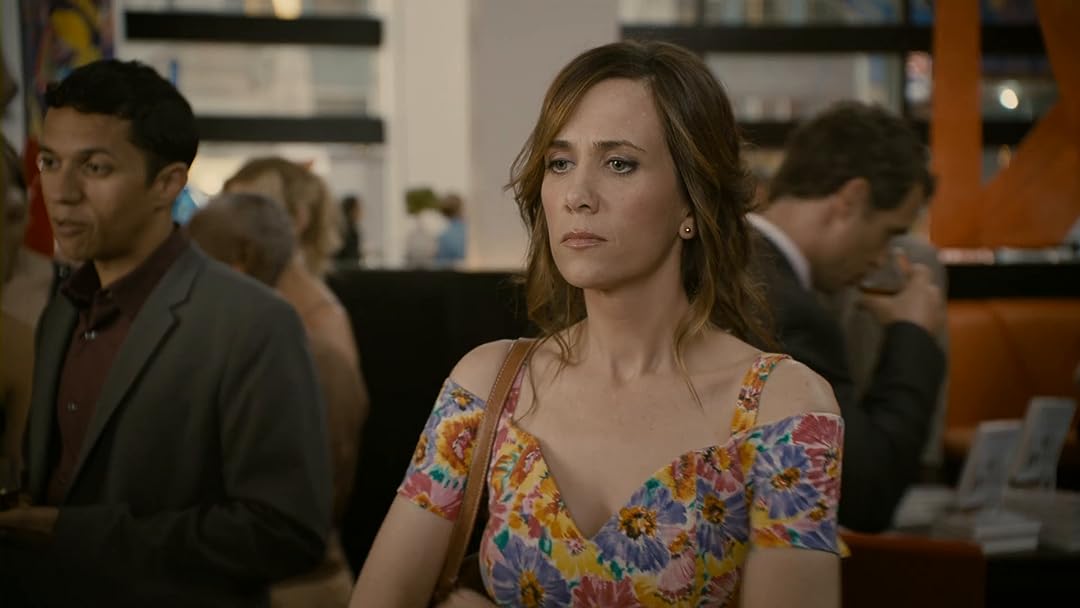 (1,520)5.81 h 43 min2013X-RayPG-13
Comedy starring Kristen Wiig. A hapless writer living in New York is forced to move back to her mother's house in New Jersey when her career takes a serious downturn.

Banyon GarfeldReviewed in the United States on August 4, 2017
4.0 out of 5 stars
Heartwarming & Quirky - Great Performance by Annette Bening
Verified purchase
I was really surprised at how deeply felt and sweet this movie was. It seemed to be marketed as a comedy, but it was really a lot more than that. Actually there weren't so many laughs as much as there were life lessons, character complexities, quirky dysfunctional family drama and bizarre situations. Kristen Wiig is fine as a washed-up playwright whose life has imploded, but it is really Annette Bening who steals the show with her emotionally complex performance as the estranged mother with a gambling problem and a much younger, mysterious boyfriend played by Matt Dillon.

A sub-plot involving Dillon's character (is he really a spy or just pretending?) over-steps the point of credulity, but it all works together for good in the end. The romantic sub-plot involving Wiig's character and Darren Criss also seems a bit manufactured to move the plot along, but it works in its own way as well. Overall, this is not a movie to go to for big laughs, but if you can appreciate more subtle comedy with a huge slice of heartwarming story, this movie is worth checking out.

neognomicReviewed in the United States on February 2, 2020
2.0 out of 5 stars
1.5
Verified purchase
I agree with others that "Girl Most Likely" is one of the worst comedies of 2013. Not THE worst but certainly close.
It is not funny.
Put me to sleep in a sad state.
Next day, to finish the last 45m, was just as irritatingly, agonizingly and predictably bad.

I did not laugh one single time. Not once.
What should have been the most humorous, ROTFL, scenes were nearly humorless due to the BAD work done by the directors Shari Springer Berman and Robert Pulcini, and Wiig. This was full of potential but everybody, except Benning, did such bad 'comedic' work that it is not funny at all. Annette Benning was not funny but at least she was not depressing like Wiig was.
I think it might appeal to a certain gender and class of people to which I do not belong. It's either that or Wiig used some of the (too much) money she was paid for this depressing piece of work to pay reviewers to say the movie was 'cute' and 'surprising' and, of course, that Wiig did good work.
She did not. She/it literally put me to sleep.

But let's not forget the moral of the story, 'Glitter, uh, is, uh "like a sparkly expression of who you are on the inside."'

OMG! Get me a bucket.

M. MaraReviewed in the United States on July 4, 2017
4.0 out of 5 stars
Quirky, Fun and Smart!
Verified purchase
Great film. Very surprised that it didn't get more attention when it came out because I would have paid to see this in a theater. Loved all the actors. A quirky story that is well written and fun. I do wish it had been longer. I would have liked to see the process of her getting back on her feet, seen what happened to her brother and his invention. Did she get with the guy and what happens to him? He went to Yale so he should move beyond the job he has. But besides wishing it were longer to answer these questions (a problem that was probably not the fault of the writer or director), I highly recommend this film! Strong four stars.
9 people found this helpful

L. BurgettReviewed in the United States on March 20, 2019
4.0 out of 5 stars
Surprisingly sweet and sincere
Verified purchase
First off, the writing and acting is great, so no cringe-ey moments watching your favorite actors either stumble themselves or stumble upon a sub-par storyline or diaglogue. This film rises to the talent of the actors' abilities.

The storyline itself is engaging and the thematic elements are easily relatable. We've all been dumped, we've all had embarrassing career failures and we've all been in a place where our friends reveal their true intentions, often to our disappointment. And we've all gone off our stride, filled with self-doubt and shame.

Kristen Wiig's character is sweetly flawed and confused and watching her keep her wits about her while her life falls apart, is eminently relatable as thru the course of the story, she gains the confidence to be who she is without apology.

Especially many women will relate to this situation and I know this sounds corny, but in a crap world with a crap economy, it's nice to find a film that gives "regular people" a space to make their dream come true.

Cat TrinaReviewed in the United States on October 9, 2018
4.0 out of 5 stars
Flies under the radar
Verified purchase
I'm a big fan of Kristen Wiig because she knows what roles are right for her. Between this and Hateship Loveship, she brings a lot of emotion as well as humor to her performances. This movie, while subtly humorous, has a lot of dark elements: social climbing, child abandonment, children with developmental issues, addiction, relationship oddities, etc. This could have been a disaster but the performances pull it off. Annette Bening is pretty funny in this as an Atlantic City mom who has gambling/addiction issues but is able to maintain her "lifestyle" with the help of boarders to her home. And she's dating a guy named "George Boosh" played by Matt Dillon, who appears to be rather sketchy at first, and by the way, he's excellent at comedy. Bone dry.

I thought this would be a laugh a minute but it's not really. There is depth to the story and while some of it is a little bit slow, I liked that about it too. To say this family is dysfunctional is a bit of an understatement but they're all interesting characters individually, particularly Annette Bening.

If you like any of these talented performers, please see this film. I don't think you'll be disappointed.
2 people found this helpful

RaphaelReviewed in the United States on March 19, 2021
2.0 out of 5 stars
WARNING: SPOILERS Film had good actors, not enough or realistic development of characters
Verified purchase
Kind of left me hanging at the end. The characters seemed kind of hallow overall, and not realistic enough. Your mother takes you home after suicide, yeah she's rented your room, but you have to be somewhat of a prick to blame the tentant and demand he drive you to new york when you barely know him. What does he owe you? Not to mention sleeping with him that night by just somehow softening up. Then you meet Dad and after all this passion to find him, yearning for emotional support, so he seems rather dry, offers you money but you just automatically throw him out the window and leave after vomiting? Just didn't seem realistic enough. Seemed like she should've dug a little deeper to figure him out, determine his true feelings. So not enough development of characters. The main character just seemed to be a combination of being sensative and insensative, in search of love, and yet spoiled and pissed off with life, and to top it off is a writer of all things. She's not realistic enough. Film had good parts, some funny parts, (but not amazingly funny) not enough backbone. Not realistic enough. You can bring in or ignore parts to or a movie which wouldn't be the case in real life, but you have to know where you're going too far. The climax of the movie wasn't really great. I wanted a little more of an ending, but it seemed like it stopped rather short. Whether it was resolving things with the father, or overcoming someone or something else, I didn't really feel the character reached that kind of bigger turning point.

DetectorReviewed in the United States on July 26, 2018
3.0 out of 5 stars
the spy was the most realistically drawn character. I ...
Verified purchase
the spy was the most realistically drawn character. I suppose we were supposed to find the two children sympathetic, but nope, not. I'm guessing the little actress in the opening scene was supposed to be the protagonist as a child, but as for establishing her character as an adult...again, didn't work, there was no connection to the character of the adult. As to the actors. there are at 3 faces you will recognize, though something awful has happened to Annette Benning's mouth. She is still recognizable, but it was a little hard to watch while she was speaking. Film ends abruptly; I was a little surprised it was over, but not ungrateful.
One person found this helpful

SpikeReviewed in the United States on February 25, 2021
2.0 out of 5 stars
The cast couldn't save it..
Verified purchase
Sorry if you paid for this movie.
Kristen Wiig is a hilarious actress and I had highhopes for this movie. With costars Matt Dillon and Anette Benning, there was such much potential to pull off a great movie. Unfortunately, the screenplay or director failed to deliver. Kristen breaks up with a boyfriend that only gets 2 minutes of screen time. She fakes a suicide to win the bf back (yes, really.) She ends up immediately turned on by a new guy. Both these male roles are 15 years younger than Kristen, about 24ish. Age doesn't matter much, but they look significantly younger, and since the whole movie is based on her quest for hormonal balance, it's a little strange that a faux "suicidal" 40-something, keeps crushing on college-looking actors. Just saying, if it were a man playing this role, people would be screaming "creep factor." ****The storyline is dreadful and fails to bring any punch to the screen. This script should've been reconfigured as soon as they cast these great actors. The recipe of Wiig, Dillon, and Benning was all they needed. Christopher Fitzgerald was fantastic portraying the awkward brother, he and Wiig's on-screen chemistry was great. Unfortunately, the entire movie is focused on Wiig simping on these frat-like guys. I really think this movie could've been great if it were rewritten for Wiig, Fitzgerald, Dillon, and Benning.
I streamed this for free. If you paid for it, it's worth regretting.
See all reviews
Back to top
Get to Know Us
Make Money with Us
Amazon Payment Products
Let Us Help You
EnglishChoose a language for shopping. United StatesChoose a country/region for shopping.
© 1996-2021, Amazon.com, Inc. or its affiliates