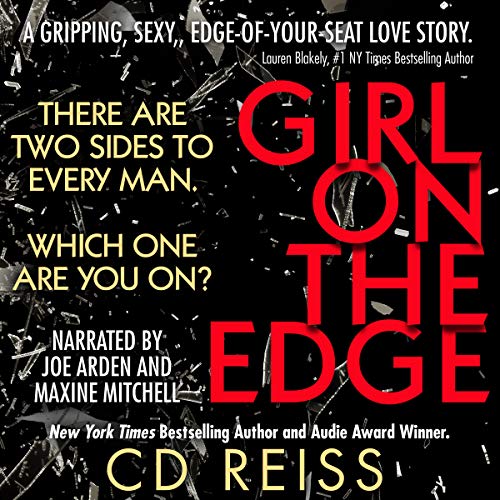 Girl on the Edge

"Girl on the Edge is a searing breakthrough of a book. Utterly original and completely enthralling, it broke my heart and all the rules at the same time." (Laurelin Paige, New York Times best-selling author)

He's her husband, but he's not the man she married.

Caden and Greysen come home from deployment to build a life together. Everything is perfect, until Caden starts changing into a different man - one with a savage edge that's as dangerous as it is seductive.

Who is her husband?

What has he become?

With time running out and forces bigger than their marriage working against them, Greysen needs to put together the pieces before Caden takes it all too far....

Special invitation from Audible!
Learn more about Membership
List Price: $29.95
You Save: $3.96 (13%)
By completing your purchase, you agree to Audible’s Conditions Of Use
Sold and delivered by Audible, an Amazon company
Share

3.8 out of 5 stars
3.8 out of 5
32 global ratings
How are ratings calculated?
To calculate the overall star rating and percentage breakdown by star, we don’t use a simple average. Instead, our system considers things like how recent a review is and if the reviewer bought the item on Amazon. It also analyzes reviews to verify trustworthiness.
Top reviews

Granny Chris
1.0 out of 5 stars I thought This Was A New Book
Reviewed in the United States on February 5, 2019
Verified Purchase
I had read the Edge Series and had enjoyed all the books so when I saw the advertising for this new book I thought it would be an entirely new offering from CD! It wasn't! So I was duped! Silly me I read over 50% of this hoping against hope that the author would at least offer something new and finally I looked at the reviews for guidance. No where at least in the advance advertising and the description for this book on Amazon did it say that this was a compilation of the previous books in the Edge Series! So if you've read the Edge series already don't make the same mistake I did!
Read more
6 people found this helpful
Helpful
Report abuse

Trish Buddner
1.0 out of 5 stars Loyal follower duped
Reviewed in the United States on February 3, 2019
Verified Purchase
I see C D Reiss and I 1 click! Even if its 9.99.
Have The Edge Collection and was so excited. Reread over the weekend and started Girl last night! VERY SUPRISED AND UPSET.
More disclosure to this book is warranted.
Read more
4 people found this helpful
Helpful
Report abuse

Becky Ballenger
5.0 out of 5 stars CD Reiss is so phenomenally talented!!!!!
Reviewed in the United States on April 4, 2019
Verified Purchase
CD Reiss is amazing!!!!! This book is FIRE!!!!!! It’s kept this “girl on the edge” of my seat, and TURNING ALL THE PAGES!!!!!
Read more
One person found this helpful
Helpful
Report abuse

Jennifer Momjian
2.0 out of 5 stars Disappointing
Reviewed in the United States on January 23, 2019
I received this book as an arc for an honest review.

I was really looking forward to this story. I have read come of CD Reiss previous books and loved them but unfortunately, this one fell flat. This is an erotica/thriller and the more I read the more disappointed I got. Greyson is a psychologist with a husband suffering for PTSD and split personality. I understand that PTSD from the military is huge in our country but I feel the way the author wrote about this, was not represented well at all. For the length of this book (over 800 pages) there could have been so much to this story. So much more character development instead of the repetitiveness that it had. The answer to every problem in this story was rough/abusive sex. I am huge lover of both erotica and thriller stories but this one was just very disappointing.
Read more
5 people found this helpful
Helpful
Report abuse

Vida._.Loca
5.0 out of 5 stars Brilliant Thriller
Reviewed in the United States on January 29, 2021
GOTE is an insane suspense/thriller/romance. A wild ride that really requires you to be in the right frame of mind in order to process what is happening as some of the changes literally happen in the blink of an eye.

Greysen comes from a long line of military members. She planned on honoring her family tradition and making the military a career until she meets Caden. Caden received a direct commission as a doctor and joined the army under privilege, knowing that as soon as his ‘debt’ was paid, he would go back to civilian life as a surgeon. Greysen will follow Caden home to New York, both leaving military life behind. He is a cardiac surgeon, she is a psychiatrist. They go about their new routines, their jobs, hanging with friends. The changes are so subtle that Greysen thinks Caden is just readjusting to finally having his wife home. Their marriage is great. They’re happy and their time between the sheets is even better. Sure he’s a little rougher than before, but much to Greysen’s surprise she loves Caden’s domineering demeanor in the bedroom. But it doesn’t take long for Greysen to realize that her husband isn’t quite the same and she begins to feel he may be suffering from PTSD. He is after all a surgeon who while medicated and under psychiatric monitoring remained awake for eight days while tending to those wounded on the front line. Surely no one walks away from the horrors of war unscathed. Right?

Narration is performed in duet. I believe this was Joe Arden and Maxine Mitchell's first duet and their performances are EPIC. Maxine has the perfect amount of emotion to draw you in from the beginning that as the story begins to escalate, Maxine is right there maintaining the cadence and emotion needed to convey what Greysen's feeling and going through as she does everything she can to help Caden.

Joe. WOW! Joe is outstanding in delivering the changes his character goes through. And let me tell you, the end of chapter 63 and ALL OF chapter 64 were pearl-clutching moments as Joe delivered his best performance EVER. I literally clasped my hand to my throat as I was so enthralled by his acting at this moment, in this scene. When he screams, when he cries out, and when he cries, you feel it. YOU. FEEL. IT. This entire scene with Maxine and Joe will stay with you and will not be easily forgotten. It is now my litmus for all things Emotional Joe.
Read more
Helpful
Report abuse

Betul E.
2.0 out of 5 stars Not my cup of tea.
Reviewed in the United States on January 28, 2019
I would describe Girl on the Edge as Erotic (Medical/psychological) Thriller. The first 30% of the book I was dedicated and intrigued with the story and characters. I was expecting a lot of things to happen, seeing how long the book was (839 pages). However, it just fell flat and repetitive after a while. It seemed like (rough) sex was the answer to everything. I just got bored with it and started skipping those scenes completely. In my opinion they didn't add anything to the story. I was expecting the married couple (Caden and Greysen) to go through major character development, but they come across as one-dimensional and I didn't see a lot change. I was not invested in their relationship, because I disconnected from them after the first quarter of the book. The length of this book didn't do it any favors in my opinion, I think I could've enjoyed this book more if it was much shorter. Also the heavy focus on the military was not my thing at all. That was another factor why I didn't enjoy this book as much as I would've liked. I usually love thrillers but this one just didn't work for me.
Read more
2 people found this helpful
Helpful
Report abuse
See all reviews
Back to top
Get to Know Us
Make Money with Us
Amazon Payment Products
Let Us Help You
EnglishChoose a language for shopping. United StatesChoose a country/region for shopping.
© 1996-2022, Amazon.com, Inc. or its affiliates