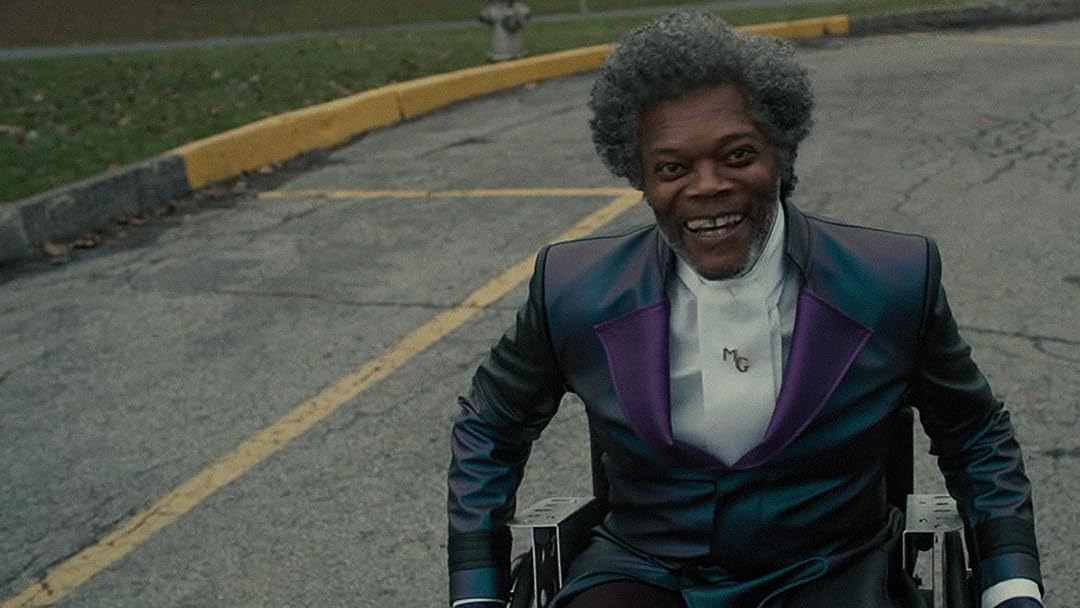 EL SIDReviewed in the United States on January 19, 2019
4.0 out of 5 stars
First Name Mister, Last Name Glass...
So I wasn’t sure what to expect but I’m not sure why critics are just kinda sidelining this movie as a failure. Sometimes I think critics are out to destroy careers and the sheeple are just willing to jump on the bandwagon. Let me start by saying I have seen Unbreakable and haven’t seen Split but I did get the jist of Split from the previews. I plan to go back and watch it soon. Now I will say that I thought it was pretty cool and the ending opens up this trilogy into more potential stories and chapters.

It feels almost like an X-Men movie in some ways and introduces the main characters to a threat outside of themselves. You may almost be fooled by these new game players and will appreciate how they sneak in to subdue to only to be done in by Glass after they claim victory. It’s a shame we don’t get a chance to see more of them but maybe in a future installment.

Shyamalan could be a Nolan & Snyder camp category of super hero movie maker. That means you’ll enjoy the seriousness of the movie. It is refreshing because this isn’t about flashy costumes and jokes every 5 minutes. There are fight scenes when it makes sense for the story and the effects come across as subtle and grounded as close to our reality as possible. I wonder if his movie is being unfairly evaluated because it doesn’t follow the action comedy format in some of the MCU movies.

One thing I would have changed is maybe a bigger ending. The way it ends is classy and tidy and clearly lets the viewer imagine what happens next. However it wouldn’t have hurt to have an explosive ending along with it to add even more tension. If it were up to me Glass would have executed both final plans with one being huge bang or boom. This would probably force 1 or two more additional films and force the new threat to reveal themselves even more. Perhaps Netflix would be a good way to expand what happens after Glass's final plan is executed. A Netflix series could also explore the outside threat and how they came to be and what they did in the past.

So if you’re into the action comedy thing you won’t dig this. If you like the feel of Batman Begins, X-Men, X2, Looper, Daredevil (Netflix), Jessica Jones (Netflix) you’ll dig this. If you easily float between serious and not so serious styles of super hero movies you’ll have no problem.

Don't go into this movie with expectations for a super hero story about David Dunn taking on two super villains. That's not what this movie is about. If you can accept that, you're in for a treat, a movie very close in quality to the excellence of the two that preceded it.

If you expect this to be a David Dunn vs the Horde vs Mr. Glass superhero showdown, you will likely leave disappointed.
114 people found this helpful

TotallyOnHollidayReviewed in the United States on January 23, 2019
5.0 out of 5 stars
Fantastic Return of M. Night Shyamalon!
Thank God I stopped listening to critics a long time ago. They slammed this movie so badly, I couldn't figure out if they had actually watched the movie, or were more interested in slamming Mr. Shyamalon. Most of us movie people already know where they can stick it. Anyway, I was so entirely proud of Mr. Shyamalon and the excellent way he brought Unbreakable and Split together and then wrapped it up with Glass. The story, the acting, and the music were superior. If people complained that too much was being thrown at them and that it was a muddle of confusion, then those people simply didn't do their homework in viewing the other two movies prior to seeing this one. One must really appreciate the gifted talent, tremendous hard work, excellent writing and the millions of details it takes to bring a movie like this to the screen and M. Night Shyamalon has totally nailed it here.
135 people found this helpful

Ariel SReviewed in the United States on April 28, 2019
1.0 out of 5 stars
So long, so bad.
Verified purchase
I was looking forward to the culmination of Unbreakable and Split even though Shyamalan has put out some very questionable movies over the years, but it was a huge let down. If this is the lack of skill Shyamalan has sunk to, he needs to stop making movies. The movie took forever to reach any sort of actions, and when it did, it was underwhelming. The camera work seemed like it was executed by a nine-year-old with a cell phone. The performances were excellent, but the film as a whole was not cohesive. The weird introduction of the organization out to eradicate superheroes/villains was thrown in haphazardly, and the plot could have been SO much better. You would assume after making movies for 20-some years, Shyamalan would grasp how to set a movie’s tone, but this movie doesn’t know whether it’s serious, comical, a thriller, or a tragedy. Then, there’s the weird, hopeful, sentimental ending that comes out of nowhere. That’s 2 hours and 9 minutes of my life I wasted on terrible directing. I hope Shyamalan apologized to James McAvoy for taking his performance/creation of 24 distinct personalities and crapping all over it.
44 people found this helpful

Brandon SpencerReviewed in the United States on April 24, 2019
1.0 out of 5 stars
So bad it's not even laughably bad
Verified purchase
My fiance and I watched Unbreakable and Split. We loved both, especially Split so we were understandably excited when Glass was announced. After hitting theaters, we'd heard bad feedback so decided to just hold off until rental. I'm so glad we did. This movie is so bad, and not the good kind of bad. I love a good popcorn movie or laughably bad film but this took itself seriously and in turn was just a sad attempt to conclude the story or three good characters while opening the world up to more stories. We are honestly still in disbelief after watching it last night. As I've seen some state, James McAvoy's performance was the only consistently good thing and if this movie serves as anything, it's of proof McAvoy has stellar range as an actor. I hope this flop does not affect his career. The movie really had some interesting ideas at times that were just executed poorly with bad dialogue and terrible writing and directorial choices. Even the fight scenes just seemed more awkward than dramatic. I will probably skip any potential sequels if there are any in the works.
31 people found this helpful

Wendy StebarReviewed in the United States on April 9, 2019
1.0 out of 5 stars
Don't waste your time
Verified purchase
M. Night Shyamalan's worst yet.
James McAvoy's performance was the only brilliant thing about it. His resolution of his 3 "superhero" characters was so bad. If I had seen this in a theater, I'm sure there would have been "Boos" at the end.
37 people found this helpful

russell hessReviewed in the United States on April 4, 2019
5.0 out of 5 stars
Great great great...will this be the one Oscar..
Verified purchase
Big night fan...loved every ounce of the movie.Very well done ...will watch it several more times..spreading those positive vibes...best night movie ever...he's the best...the camera under the puddle of water..what??...first name Mr. Last glass...
35 people found this helpful

Lt. Frank BullittReviewed in the United States on January 22, 2019
3.0 out of 5 stars
Incredible performance by McAvoy, mediocre script, slow pacing, ultimately disappointing...
I really don’t know why anyone would see this film if you haven’t already seen Unbreakable and Split. I’m going to assume you have, otherwise this film won’t make much sense to you anyway.

I try not to get excited about sequels anymore because I’ve been disappointed by many of them. That being said, I was really anticipating this film. I got tickets for the first public showing because I didn’t want any chance of spoilers or reviews ruining my perception of it. Obviously this is a sequel to both Unbreakable and Split which are two of Shyamalan’s better films and it ties all the characters together. Unfortunately it does not recapture the glory of its two predecessors. Here’s why.

First things first, McAvoy turns in what could be an Oscar-level performance. The amount of prep work he must have done for this role is astounding and he nails the character perfectly. This easily equals, if not surpasses, his performance in Split. His character is developed well and his performance steals the show. This is part of the problem though. Willis’ David Dunn character is one of my favorite characters. He is the perfect reluctant hero. Unfortunately, his character is not developed. He goes through the paces, but we see and hear from him too little. It’s disappointing because Shyamalan has brought us two of Bruce Willis’ best performances, but this was not one of them. His character is just along for the ride. Jackson’s Glass character fares a little better and it’s nice to see his character change now that he is older and arguably much more twisted.

Technically this film is well done. Shyamalan has no problems shooting a beautiful movie, but the script and pacing are where this film comes up short. Let me say this; I’m one of the few people who actually likes The Happening and I found Glass to be way too slow and boring. The pacing on Glass is downright awful and I like slow suspenseful films. It needs to have about 30 minutes removed from it and more suspense. It doesn’t need explosions and gunfights, but it needs to build towards something.

Finally let’s get to the important thing in any Shyamalan film: the reveal. There are actually two reveals in this film, one minor and one major. The minor reveal relates to the origins of the characters and this is genuinely well done and appreciated. The major reveal is pretty bad. It’s bad because it comes completely out of left field. There was not much foreshadowing except for some pretty ham-fisted tattoo close-ups. It feels like someone told him the first reveal wasn’t enough so he reshot the last 10 minutes of the film to create a second one out of thin air. It doesn’t work and it’s pretty bad.

I really wanted to enjoy this film, but it doesn’t do justice to the two previous movies. It had such great potential and so much possibility with three truly great characters, but the script and pacing are really what let it down. It’s a shame.
81 people found this helpful
See all reviews
Back to top
Get to Know Us
Make Money with Us
Amazon Payment Products
Let Us Help You
EnglishChoose a language for shopping. United StatesChoose a country/region for shopping.
© 1996-2022, Amazon.com, Inc. or its affiliates