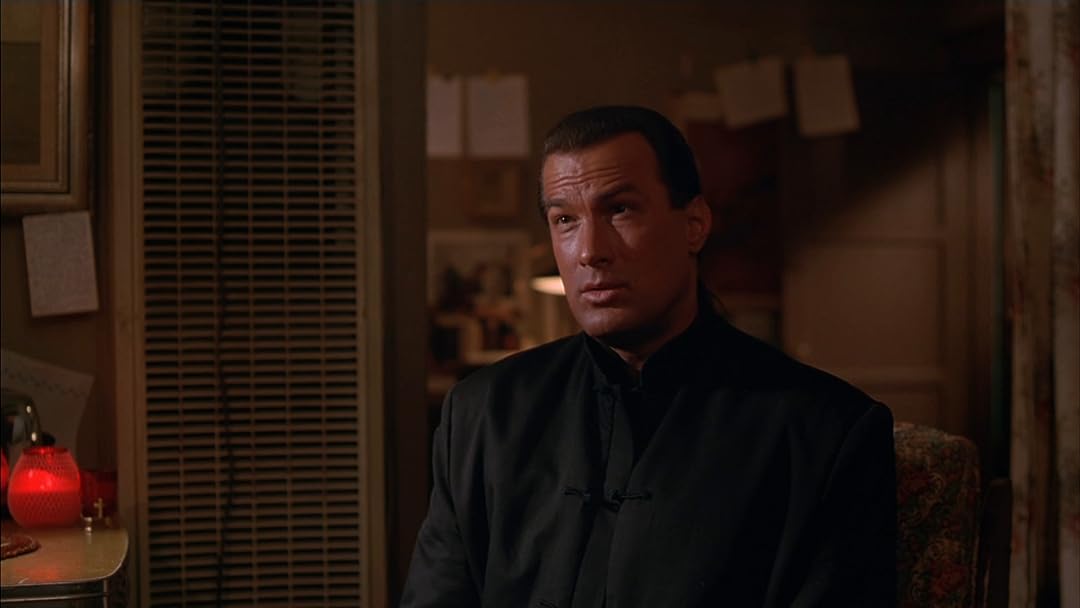 Duncan PattilloReviewed in the United States on November 21, 2019
5.0 out of 5 stars
Solid plot and action along with some humor make this a fun watch.
Verified purchase
This movie has a plot that moves along very well, and keeps the viewer engaged. Steven Seagal and Kennen Ivory Wayans make an unlikely pair, but it works. Seagal uses his trademark Aikido, and Wayans is very effectivce with his action scenes. The supporting cast all do very good job as well. A great 90's action movie.
2 people found this helpful

Janice HowardReviewed in the United States on September 22, 2020
5.0 out of 5 stars
Steven Seagal movies
Verified purchase
I love Steven Seagal movies, I’ve seen all his movies and I like to watch them again but I can’t see paying rent on a movie I’ve seen three or four times that is ridiculous. Some of these movies were made in 1992 thru 1999 and you’re charging rent?
One person found this helpful

Geri BethelReviewed in the United States on November 18, 2019
5.0 out of 5 stars
Fantastic movie. Steven Seagal and Keenen Ivory Wayans were great.
Verified purchase
Fantastic movie. I loved the scene where Steven Seagal says he is not a fighter and then pulls a credit card with a blade out. Keenen Ivory Wayans was fantastic as his partner. My only hassle is the fact that my order still shows as undelivered; but, I received it. I do not know why Amazon is having this problem recently. Several of my items I received still show as "on the way, but running late"!!

WEAK HEART 4 LIFEReviewed in the United States on July 20, 2020
1.0 out of 5 stars
SEGALS PERFORMANCE JUST SEEMS OFF OR MAYBE TO FORCED
Verified purchase
HAD A REAL HARD TIME GETTING THROUGH THIS FILM I THINK THIS IS WHERE STEVEN SEGAL STARTED TO GO DOWN HILL AS FAR AS SCRIPTS. LOVED HIM IN UNDERSIEGE, AND ON DEADLY GROUND. BUT THESE LATER FILMS JUST START TO FEEL LIKE HE IS GIVING THE SAME PERFORMANCES OVER AND OVER.

Dennis M. HarrisReviewed in the United States on May 21, 2021
5.0 out of 5 stars
Steven Seagal is the man!
Verified purchase
Steven is the man! IMO, this is o e of his best early movies. Keenan Ivory Wayans had the best supporting actor roll I’ve seen in some time. I highly recommend it to anyone who is a fan of Steven Seagal!!!

Jeff HamiltonReviewed in the United States on May 27, 2021
5.0 out of 5 stars
Probably Seagal's Best
Verified purchase
The only Seagal movie I liked better was Under Siege. While from a police standpoint it is not super accurate, Seagal gets most of the best lines, and having him paired with Wayans made for a great dynamic.

Michael P. BeckReviewed in the United States on October 7, 2005
3.0 out of 5 stars
"Now get your ugly white a$$ outta here......"
Verified purchase
Typical Seagal fare, in which thick leather (and even alligator skin) trench coats replace the need for a decent plot. Seagal's paunch is ever present, and his penchant for food is made clear when during one scene he busts in on a private lunch meeting and starts sampling what appear to be enchiladas. At least its good to see Seagal poking fun at his own image, as one villain asks him to take his 'sensitive pony tail and sissy beads' and leave the restaurant. Said villain is met with a swift hand to the throat in response to this statement of course, but you can only ask Seagal to expose his sensitivities so far. One of the more humorous moments include the main villain threatening Seagal in a police station packed with officers, of all places, and Master Steven responding to this by telling the foe to get his 'ugly white a$$' out of the station. This unprecedented outburst of racial indignation is amusing if at all for the fact that Seagal himself is a white man. Just unreal. Look, this is a Seagal film, what do you need to know? He breaks 50 lbs of human bone via various joint locks, he has a pony tail, he is an agent of a state/federal department of some type. Oh yes, and he has a black partner, a situation that seems to be the norm in Seagal films. Prepare to laugh at the absurdity.
3 people found this helpful

Scrooge McDuckReviewed in the United States on October 17, 2001
3.0 out of 5 stars
Ste7en
Verified purchase
I regard this movie as the beginning of the first downward spiral of Seagal's career. After the epic action of [[ASIN:B001CT877G Under Siege 2: Dark Territory [Blu-ray]]] and [[ASIN:0790731894 Executive Decision]] it was a bad mistake to sign-up for The Glimmer Man. When I went to the cinema to see this film on November 2nd 1996 they didn't even tear my ticket stub. Of the thousands of cinema tickets I've kept it's the only one that hasn't been torn. Not even the employees of the long-gone ABC Cinema could be bothered keeping tabs on the audience. Needless to say that the film wasn't screened for critics and every review in the papers that week was nothing but waffling on presumptions of what a typical Seagal film would be. I am making up for that now with a proper review.

The fundamental flaw in The Glimmer Man is that it's just far too contrived. The 80s 'mis-matched cops' cliché didn't help either. Plus, the film was yet another [[ASIN:B001BPQT8A Seven [Blu-ray Book]]] wannabe, a sub-genre that flooded cinemas post October 1995.

Seagal plays Jack Cole, a weirdo New York cop transferred to Los Angeles for reasons that are never clearly defined. He's teamed-up with wisecracking Detective Jim Campbell (Keenan Ivory Wayans, who did not like Seagal) to catch 'The Family Man'; a serial killer who crucifies families (actually just the parents). But things get a little too personal for Cole when his ex-wife is killed by a Family Man copycat because she was the psychiatrist of the high school kid he saved who had discovered his evil step-dad's plan to sell chemical weapons sold by the Russian Mafia and brokered by the CIA, who Cole used to work for.

It's very poorly written by Kevin Brodbin, himself a former film critic, so he ought to have known better. This wouldn't be so bad if the fight scenes were remotely impressive. There are a couple of good action moments, like Campbell's apartment fight, but the rest are very quickly edited to compensate for Seagal's decreasing suppleness and rapidly expanding waistline. And after the high adventure of his previous movies, going back to low-wattage bar fights and gun play just isn't exciting.

Unknown director John Gray (who?) shoots the film like a TV movie. You'd be forgiven for thinking that this was an average episode of CSI:New York. He tries to mimic the retro-noir look of Se7en with lots of gloomy locations and rain but it just gives the film a really oppressive feel.

It's obvious that Seagal's influence on the script made it to the screen. As usual there's mumbo-jumbo about Cole's mysterious past (something Seagal both pretends AND denies he has). The mystical Buddhist stuff really adds nothing, you can see right through it to Seagal's unnecessary pandering, and what exactly is the deal with those jackets? Definitely from Seagal's own wardrobe and strategically chosen to conceal the Belly the of the Beast.

There's some decent acting to be had outside of Seagal's non-effort. Wayans proves he's more capable of being an action than the rest of his family (and Seagal too) and Brian Cox (a last-minute replacement for Tommy Lee Jones who probably said 'oh no, not Seagal again' and fled) plays the same old dodgy CIA buffoon he's built half his career on.

If you can get around the uninspired, gibberish title and if you are suffering a serious deficit in better action movies then give it a go. Just don't bother with the horribly censored UK cut, butchered by the BBFC.


11 people found this helpful
See all reviews
Back to top
Get to Know Us
Make Money with Us
Amazon Payment Products
Let Us Help You
EnglishChoose a language for shopping. United StatesChoose a country/region for shopping.
© 1996-2021, Amazon.com, Inc. or its affiliates