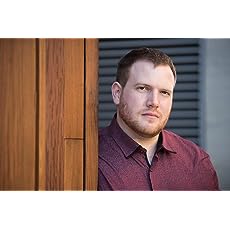 Writing managed to liberate Glynn from a bleak future as an accountant. With his personality and hope for a high-tech future intact, he lives in Kitchener, Ontario with his wife, their cats, and an unstoppable writing habit.
Read more 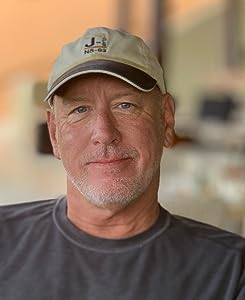 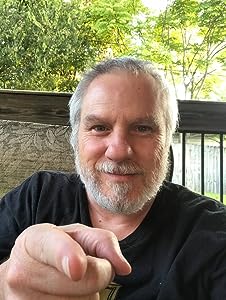 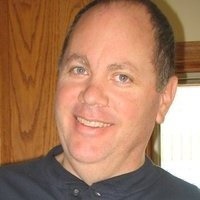 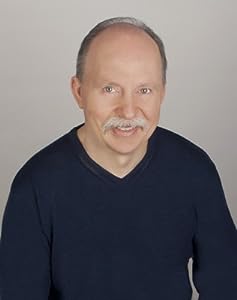 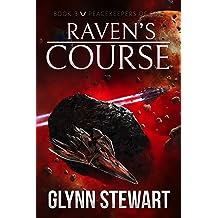 Amid the ruins of a fallen empire, humanity fights to secure the fates of once-enslaved worlds. Captain Henry Wong and Ambassador Sylvia Todorovich of the United Planets Alliance have mustered force and diplomacy alike to drive their former allies in the Kozun Hierarchy back from their invasion.

With their superiors unwilling to fight a war this far from home, Todorovich leans on the Drifters, old allies of both the UPA and the Kozun, to broker a peace summit that could bring peace to a dozen worlds—if she can trust anyone.

Fearing treachery, Captain Henry Wong and the battlecruiser Raven accompany Todorovich to the summit. Even among former friends, he can trust no one—not the Drifters and, most especially, not the old friend in command of the Kozun delegation!
Read more
Other Formats: Paperback 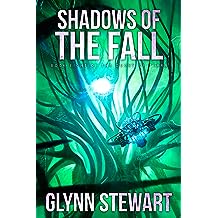 Shadows of the Fall (Duchy of Terra Book 8) Oct 13, 2020
by Glynn Stewart
( 330 )
$4.99
Fifty thousand years ago, the Precursors broke the universe
Now great powers and small alike fight over their wreckage
But in the midst of the chaos, there is a question no one asks…
Why?

Morgan Casimir, commander of the A!Tol Imperial cruiser Defiant, has seen the works of the Precursor aliens known as the Alava. She has seen their accidents threaten worlds and consume entire star fleets.

Charged by her Empress to prevent a conspiracy of profiteers from finding and using a lost fleet of Alava warships, she knows unimaginable catastrophe looms if she fails. With her lover, xenoarcheologist Dr. Rin Dunst, at her side, she is sent to a hot zone on the edge of war to once again achieve the impossible.

But as they search along a border flaring in violence, Morgan discovers that if the worst comes to pass, her orders are to destroy the ships rather than allow them to be taken…and she realizes that there just might be a reason seemingly godlike aliens lost an entire fleet.
Read more
Other Formats: Paperback 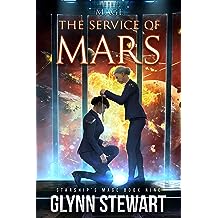 But this war began in the shadows, and the secrets hidden in those shadows threaten to turn the tide of the war once more—and bring it to the heart of the Protectorate!
Read more
Other Formats: Paperback 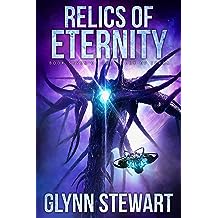 Relics of Eternity (Duchy of Terra Book 7) Apr 14, 2020
by Glynn Stewart
( 224 )
$4.99
The edge of Imperial expansion
Far from Earth and the other homeworlds
Here lie the secrets of ancient gods
Here…there be dragons

Seeking to escape the shadow of Annette Bond’s success, Captain Morgan Casimir has taken a posting on the far side of the A!Tol Imperium. Here she hopes to begin a legend for herself that stands apart from her stepmother, the Duchess.

A chance encounter introduces her to the xenoarcheologist Rin Dunst—and to the strange mystery cult that tried to silence him. There are darker secrets in these stars than the A!Tol and their human allies ever guessed…and if they can’t find answers, the Precursors' mistakes might yet destroy the galaxy. 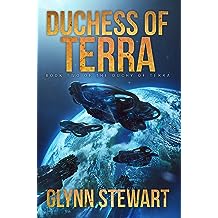 Duchess of Terra (Duchy of Terra Book 2) Feb 9, 2017
by Glynn Stewart
( 374 )
$4.99
When Terra knelt to an alien Imperium
They guaranteed our safety and our future
But now their enemies are coming for us

To preserve humanity's survival and freedom in a hostile galaxy, Annette Bond tied her world to the A!Tol Imperium, taking on the mantle of Duchess of Terra to rule humanity in the Imperium's name.

The A!Tol have provided technology, ships, and money to uplift the new Duchy of Terra, but those gifts come with strings attached. The Imperium has their own plan for Terra—but Bond has tricks of her own.

With enough time, she can build Earth a place in the galaxy. But as Bond's many enemies gather their forces, the clouds of war threaten not only the recovering Terra but the entire Imperium.
Read more
Other Formats: Audible Audiobook , Paperback 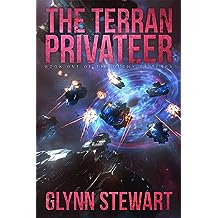 When an alien armada destroys the United Earth Space Force and takes control of the human homeworld, newly reinstated Captain Annette Bond must take her experimental hyperspace cruiser Tornado into exile as Terra's only interstellar privateer.

She has inferior technology, crude maps and no concept of her enemy, but the seedy underbelly of galactic society welcomes her so long as she has prizes to sell and money to spend.

But when your only allies are pirates and slavers, things are never as they seem and if you become all that you were sworn to destroy, what are you fighting for?
Read more
Other Formats: Audible Audiobook , Paperback 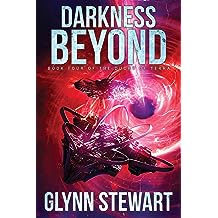 Darkness Beyond (Duchy of Terra Book 4) Oct 14, 2018
by Glynn Stewart
( 304 )
$4.99
A newly-founded human colony world burned from orbit
A warship squadron of the galaxy’s oldest race ambushed and destroyed
An ancient enemy reborn in the darkness beyond the known stars

The A!Tol Imperium and their new human subjects have had fifteen years of relative peace. New colonies have been founded, new worlds explored, new ships built. Formal and informal alliances have been built with the ancient powers of the Core, leaving humanity and the Imperium seemingly on the brink of a new dawn.

The devastation of one of the newly-founded human colonies sends ripples of shock through the Imperium, and a battle fleet under Fleet Lord Harriet Tanaka is dispatched to the edge of the Imperium to find the culprits and bring them to justice.

Meanwhile, the destruction of a Mesharom Frontier Fleet squadron calls the Duchy of Terra's newest warship, Bellerophon, into action and combat with a strange new power that bears all the signs of the Imperium's age-old enemy, the Kanzi.

Aboard Bellerophon is Annette Bond's stepdaughter, Morgan Casimir. The recently promoted junior officer will be thrust into the crucible of war and challenged to rise to her mother's example in the face of this both new and ancient enemy…
Read more
Other Formats: Audible Audiobook , Paperback 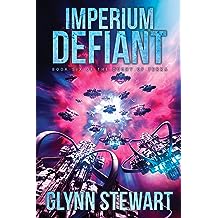 Imperium Defiant (Duchy of Terra Book 6) Sep 17, 2019
by Glynn Stewart
( 235 )
$4.99
The enemy promises conflict and annihilation
Their allies threaten betrayal and devastation
A daughter of Earth raises the call of defiance
And the Imperium has never knelt!

When the Taljzi’s genocidal invasion brought promises of aid from the oldest and greatest of the Core Powers, humanity and the Imperium looked to the Mesharom for salvation. But that salvation turns to ash as the Mesharom demand the surrender of the very weapons that saved the Imperium.

Defiance leaves the Imperium facing the Taljzi without the aide of the galaxy’s wisest race, but with their old enemies the Kanzi at their side, they have no choice but to end this war at any cost.

But Mesharom and Taljzi alike have scattered fire and death across the stars. The Imperial forces under Fleet Lord Harriet Tanaka will need every scrap of firepower and cleverness not only to defeat their enemies…but to find them in the first place.
Read more
Other Formats: Audible Audiobook , Paperback 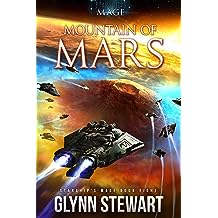 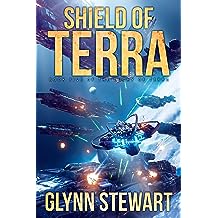 Shield of Terra (Duchy of Terra Book 5) Mar 26, 2019
by Glynn Stewart
( 247 )
$4.99
The mother, ruler of an entire world
Sent to the heart of an old enemy to build a new peace
The daughter, officer of a deadly warship
Sent to the darkness to find the new enemy hunting them all

A dozen inhabited worlds of the Kanzi Theocracy and the A!Tol Imperium are ash. Millions of sentients of a dozen species are dead, including humans from the brand-new colonies built under the Imperium's watch. Despite the losses, the strange Taljzi fanatics have been defeated—but everything suggests that more will be coming.

The Empress of the A!Tol has resolved that the cold war between A!Tol and Kanzi must end. She sends Duchess Annette Bond to the heart of the Kanzi Theocracy to negotiate a new alliance.

Elsewhere, Bond's stepdaughter Morgan Casimir and the battleship Bellerophon are sent into the darkness beyond known space to see what they can learn about the Taljzi.

As they uncover old secrets of new enemies and new secrets of old enemies the fate of humanity and five dozen other races hangs on the actions of mother and daughter alike!
Read more
Other Formats: Audible Audiobook , Paperback 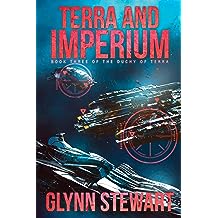 Terra and Imperium (Duchy of Terra Book 3) Aug 30, 2017
by Glynn Stewart
( 307 )
$4.99
Secrets both ancient and new.
Powers great and greater—
With Terra caught in the middle
Humanity’s first colony is a project neither the Duchy of Terra nor the A!Tol Imperium can allow to fail. The planet Hope in the Alpha Centauri system has been lavished with resources and attention—but when an unknown alien force attacks the system, all of that is in danger.
An ancient alien artifact is the apparent target of the attack, an artifact older than known galactic civilization. Suddenly, the backwater colony of a second-rate power is the gathering point for a confrontation of the galaxy’s greatest powers.
Duchess Annette Bond might be pregnant. She might be five light years away. She might have another galactic power on her doorstep demanding she surrender their rebels who’ve settled on Earth.
But she speaks for both Terra and the Imperium—and the galaxy will listen.
Read more
Other Formats: Audible Audiobook , Paperback When accusations of piracy and mass murder are laid against his homeworld, Damien Montgomery is sent to resolve the crisis.

As counter-accusations fly and an old flame re-enters his life, the newest Hand of the Mage-King of Mars finds himself in the midst of a bloody interstellar shadow war. With the death toll mounting, Damien must decide whether he should trust the world he came from – or the world that asked for his help.

The wrong choice will trigger a civil war that could shatter human civilization.