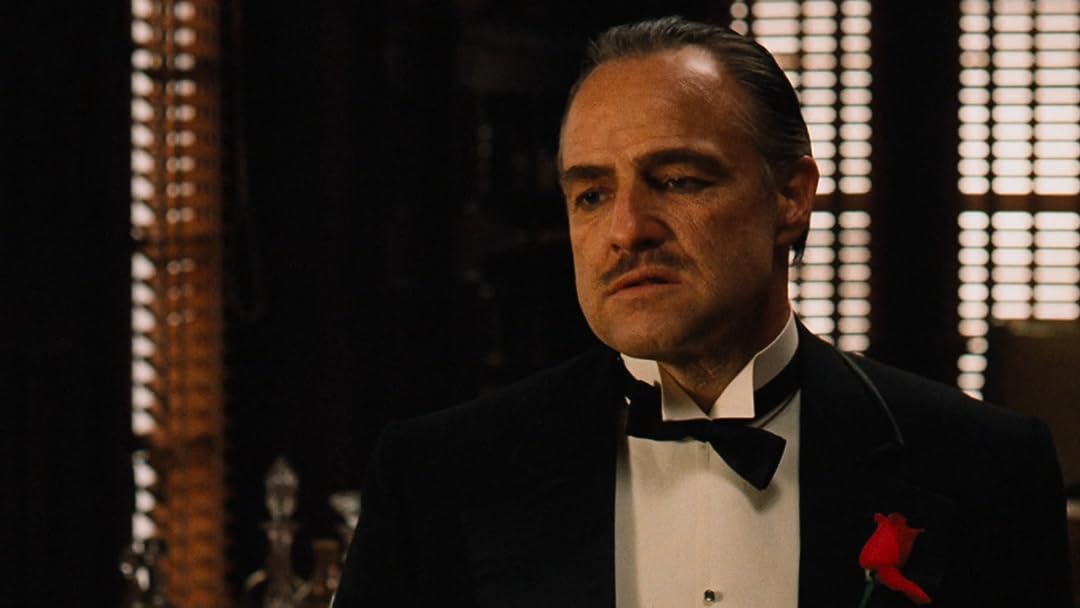 (14,738)9.22 h 57 min1972X-RayR
The son of the patriarch of the most powerful Mafia clan in New York returns home from war determined to live his own life—but is forced to take up arms in a clash between his father’s traditional ways and the newcomers who threaten the family business.

Meaty McMeatReviewed in the United States on January 16, 2019
5.0 out of 5 stars
Monday Tuesday Thursday Wednesday
Verified purchase
I was initially looking for a good how-to video for a do it yourself mafia operation. Instead I received this dvd. Although initially disappointed it was not the how to video I wanted, I found the story very entertaining and it made me hungry for quality Italian food, which prompted me to go to walmart and buy all the spaghetti-Os they had. I also decided to not start a do it yourself mafia operation after all....gunfire scares me, I'm not Italian or Sicilian, and I can't talk funny like that old Marlon Brando-looking dude....I guess I'll stick to my job making ugly balloon critters for kids parties..
40 people found this helpful

Inky DigitsReviewed in the United States on April 27, 2018
5.0 out of 5 stars
Classic for a reason
Verified purchase
What a film! It's a classic for a reason. I've seen it a couple of times, and will gladly watch it again in the future. I've watched it with lovers of classics and people who "don't like 'old' movies" alike, and all have enjoyed it thoroughly.

The story does a great job, in my opinion, of dually presenting the principle characters as criminals and "family men", and it's not given as a dichotomy, this really comes across as their "normal" life. So weddings and domestic disputes dovetail with murder and high level mob meetings in a striking and memorable narrative.

The staging and camera work, music, etc. all "supporting elements" of that ilk are so well done as to simultaneously fall away from notice and support the story, while yet remaining memorable and noteworthy in and of themselves.

One of my favorite movies ever. Highly recommended.

Tom LeoniReviewed in the United States on November 28, 2020
2.0 out of 5 stars
I guess we're all supposed to like it. I didn't.
Verified purchase
I come to this movie for the first time in my mature years, and I scratch my head wondering why it's considered such a classic masterpiece. There is no variety in the mood of the film--or in the characters, which are confusingly similar to one-another in name and appearance. There's no real storyline to speak of, save for a mafia family that fights for control and kills an untold number of people to do so (and than lies about it). Even then, it's sometime hard to understand who killed whom and why, like when Mike's Italian wife gets blown up.

Brando's role is more of a caricature than a character, so much so that it has been become--pretty much unchanged--a comedy role in spoofs ever since (see Dom De Louise's cameo in Robin Hood Men in Tights, among countless others). Same for Pacino's, whose facial expression never changes throughout the movie. I guess I should give this a second or even a third chance, but I cringe at the prospect of sitting through another 2-1/2 hours of garroting, gunfire, screaming colicky babies and justabout the worst Italian stereotyping I've ever run across on a movie screen. Even the much-anticipated memorable one-liners are too few and too far between to make it worth rewatching.

I guess I've always been immune to marketing hype and the groupthink that goes with it. Perhaps that means missing out on so much about popular culture. But I'm too set in my ways to change now. So, I think I'll consider the idea of putting myself through this movie again (or its sequels, if the first one is anything to go by) an offer I very much *can* refuse.
12 people found this helpful

joel wingReviewed in the United States on February 11, 2021
5.0 out of 5 stars
The cost of power in this gangster classic
Verified purchase
The Godfather is the epitome of American mafia movies. It was one of Francis Ford Coppola’s greatest works. It created an iconic figure in Vito Corleone the mafia godfather played by Marlon Brando. It was also one of Al Pacino’s most memorable roles. It contains classic lines like “He made him an offer he couldn’t refuse” or how about “Leave the gun, take the cannoli”? It has unforgettable scenes like a Hollywood mogul waking up with the head of his favorite house in his bed. It’s all topped off with one of the greatest examples of payback and revenge put to film. The theme was the cost of power. This is a classic that continues to stand up to the test of time. No one who likes gangster movies should go without seeing it.
4 people found this helpful

SilverGhostReviewed in the United States on May 24, 2019
3.0 out of 5 stars
Finally watched this
Verified purchase
I usually skip what the masses are doing. Still haven't seen any Game of Thrones and probably never will. Nasty period of time -everybody killing everybody, nobody bathed, disease everywhere and all that mud and dirt. Ran across this movie and remembered it was a big and and was curious why. Still curious. It was a good movie, but Academy Award great? Meh.
9 people found this helpful

DesertAngelReviewed in the United States on August 9, 2019
5.0 out of 5 stars
Immortal classic!
Verified purchase
My 13 year-old nephew has watched this movie 7 times, he told me. When asked why, all he said was "It's superb!" I love the haunting music. We lived in Brooklyn so it fascinates how it could have looked then, although of course the scenes are propped in studios! In other words, the movie exudes a tender nostalgia.
8 people found this helpful

SummertimeReviewed in the United States on October 7, 2017
5.0 out of 5 stars
My ALL time favorite mobster movie - hands down
Verified purchase
My ALL time favorite mobster movie - hands down, the absolute best! Phenomenal actors, the script, the cinema, the pictures....everything was so believable. We have not had any movie to date in terms of mobster flicks that can compare to The Godfather. It wasn't just about murder, it was about family, organization, and well yes corruption......ultimately the goal was to raise a new generation not carrying on the family business at least not in that way. Anyways, LOVE IT.....always have.....The best!
15 people found this helpful

Scott LeeReviewed in the United States on March 18, 2019
4.0 out of 5 stars
Audio problems...
Verified purchase
I love this movie, it is an all-time great. My complaint is not with the movie.

My complaint is I rented the SD version and the audio quality was just terrible. Anything with a sibilant sound (like s, z, even, to a lesser extent, f’s) made an echo-y, off-putting sound. I tried multiple different audio settings and this is the only time I’ve ever heard this problem on my audio system. I’ve watched the same movie via satellite and it didn’t do this. Please, Amazon, fix the audio quality problem. Thanks
11 people found this helpful
See all reviews
Back to top
Get to Know Us
Make Money with Us
Amazon Payment Products
Let Us Help You
EnglishChoose a language for shopping. United StatesChoose a country/region for shopping.
© 1996-2021, Amazon.com, Inc. or its affiliates