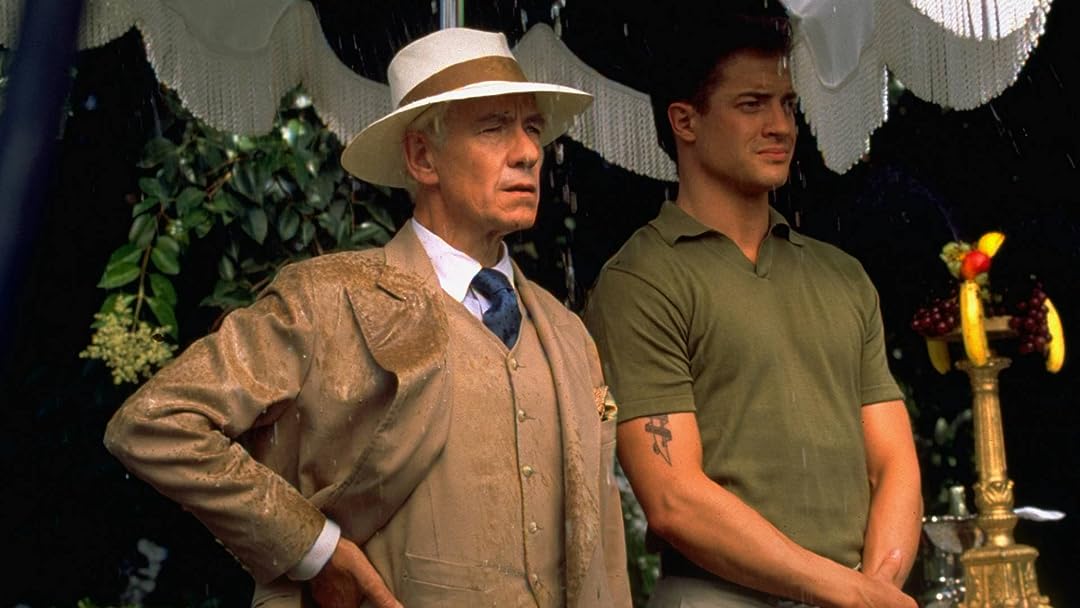 (483)
7.41 h 45 min1998R
An acclaimed tale of unexpected friendship and a glimpse into Hollywood’s past, with Ian McKellan as aging Frankenstein director James Whale and Brendan Fraser as his young gardener.

MoonjumperReviewed in the United States on June 21, 2019
1.0 out of 5 stars
Interesting and disturbing until you find out it’s all made up—then you’re just mad!
Verified purchase
This movie was appalling—not because of its execution, its cinematography, or its incredible acting by two incredible actors—which are all excellent. The problem is that it’s all BS. I went into this film believing that I was watching a legitimate docu-drama of one of classic Hollywood’s most legendary directors, James Whale (portrayed by one of Hollywood’s/UK’s most legendary actors, Ian McKellen—and, as usual, he’s brilliant). The movie starts like a fairly typical docu-drama and tells the story of an aging director towards the end of his career, trying desperately to remain relevant—something anyone could sympathize with. His casual dalliances with a countless string of young men are symptomatic of his sad loneliness—again, something any feeling person, gay or straight, could sympathize with. Then Whale hires a new gardener (played equally brilliantly and dramaticly by Brendan Fraser). Whale is attracted to the gardener, but the problem is the gardener is straight. Nonetheless, the gardener (Brendan Fraser) comes to care for the old man—and they become close friends. It’s also clear that the young man groes fond enough of the older man, that he begins to question himself whether or not it might be more. So far, so good. But then things turn increasingly dark and disturbing (which would be fascinating—if any of it was true). McKellen’s behavior darkens from that of a lonely old man to that of a gay Weinstein-like stalker that culminates in the full blown sexual assault of Brendan Frazer. You gasp, thinking, my God—this legendary director whose movies you’ve loved since childhood (i.e. Frankenstein, Bride of Frankenstein) was a horrible person! The movie ends with your image of James Whale completely shattered.

But then, you do a little digging and find out that the ENTIRE STORY is MADE UP! The gardener never existed and none of the events depicted ever happened. The whole movie is based on a FICTIONAL NOVEL!!! So, in other words, this novel and movie is engaging in pure homophobic character assassination of one of history’s finest directors! I don’t know how good (or bad) of a person James Whale was—but a movie that literally accuses him of being a sexual predator and outright sexual assault—when it didn’t happen!!—is nothing short of slander. Unbelievable—and a complete waist of two hours—two hours of lies.

Kiku ChrysReviewed in the United States on June 20, 2019
5.0 out of 5 stars
Masterpiece film
Verified purchase
Loved this film, and it made me want to see Brendan Fraser in more movies. He is definitely one of the underrated actors around, and I hope he will make more films. Ian McKellan is of course great in this film, as he is in his other films. I miss Lynn Redgrave.
12 people found this helpful

SeanReviewed in the United States on October 22, 2020
5.0 out of 5 stars
Wish for more Docu-Dramas like this
Verified purchase
Sadly the Bluray is just the movie alone. No Bonus Features or audio commentaries. Not even any subtitles.
So get the DVD for additional content and the Bluray for the alright HD resolution.
Hope Criterion or ShoutFactory will make a better re-release of this masterpiece. And it shows that director Bill Condon should head a Frankenstein/Bride of Frankenstein remake for Universal.

This goes out to 1star reviewers whom complain this film is "ALL MADE UP"
.....no kidding? What was your first clue?
I dont think they were trying to fool anyone. The movie has a credit 2minutes in (Based upon the novel "Father of Frankenstein" by Christopher Bram).
And some moments of the film/book ARE TRUE but most are still to this day up to speculation. And dramatization is the point to engage the audience.
Sometimes it makes people get interested in said events to go research it themselves.
Like all biopics you simply CAN NOT and SHOULD NOT take them as 100% accurate and negate it for taking harmless liberties.
The acting, the production, the score and the over all themes of this film are absolutely astounding. Especially for fans of Universals history.

So, first off, I've only heard of this film since it came out (it may be the first movie that I ever heard of Sir Ian Mckellan before he came into my purview more for roles for my era in XMen and LOTR). I never saw it before, though.
The film has some incredible acting (Ian McKellan is of note) which is already known because of the awards the film won. I think Brendan Fraser is slightly miscast here, not really being the type to embody the tough military guy type. That is, until we understand that it is all a facade for his character. I don't think Brendan Fraser is a good enough actor to have pulled that part of the performance off fully, but it makes the casting make more sense once the film brings this to light so I don't fully look down on this casting choice. Fortunately, Brendan Fraser has always been a charming actor (I think it's because he seems like such a good dude in real life- the guy is one of those that was just born to be a dad it seems) and this works once the film reveals his true character.
Unfortunately, if you are fascinated by the film, you'll quickly run to google to find out if it's a true story. Look, no Hollywood film is a "true story." Based on a true story is just that: literally only based on the fact that someone said this happened and then extrapolated into something to sell.
Even that is stretched thin, here, as it's only slightly based on a true story. Brendan Fraser's character is not based on anybody that existed which means the entire movie is completely false- which angered somebody for... no reason worth taking seriously. The only thing that is true is the facts around James Whale- which is enough. Everything else is made up based on some true things that really did happen but bringing forth conclusions not based on any evidence. It's reality fantasy, as all stories truly are at some point. Even the ones you tell your kids about who you were when you were their age.
With that out of the way, though, I find it a missed opportunity. If this is the case, why not make it unclear if Brendan Fraser's character is even real at all? It is a fact that James Whale suffered from strokes which caused him to have some form of dementia, or other nueral issues, late in life. Why not, instead of making up a fictional character, make that the driving force of the story? Why not have that be a mystery since there is so much mystery behind James Whale's death?
I think the choice to make Brendan Fraser's character fully realized, merely because it's the singular lie in the film, is the ultimate missed opportunity. The film should never have the scenes where Brendan Fraser is with other people without James Whale. He should not have a clear through line after James Whale's passing. It should be a mystery if he ever truly even existed in the world of the film (in real life he is not based on anybody purposefully).
Given how much of the film is true, and how much is not, to me it just makes more sense to play with the mystery of it. Have it be unclear so we can further the character study and have the audience as uncertain with reality as James Whale would have been at the time.
Anyway, Sir Ian McKellan's performance should not be understated. He gives an incredible performance that very much drives the entire film (and he is much funnier than Brendan Fraser in this although who knows- maybe it was mandated). However, I think the writing is more simple than it needed to be given the subject matter.
2 people found this helpful

joel wingReviewed in the United States on November 27, 2020
4.0 out of 5 stars
Exploring the madness and love of director James Whale
Verified purchase
Gods and Monsters is a drama about the last years of Hollywood director James Whale who was famous for monster movies like Frankenstein and the Invisible Man. The movie explores his upbringing in England where he was very poor, being an officer during World War I, his time as a director and his sexuality as he was a homosexual.

The film has some very good editing. For example one time Whale is watching The Bride of Frankenstein on TV, he reflects upon what it was like making the movie and then it flashes back to him directing the scene where the Bride is revealed.

Ian McKellen does a fine job in the lead. He seamlessly switches between cognizant and madness in some scenes. He’s also an endearing character. Lynn Redgrave as Hanna, Whale’s maid actually steals the show many times when she shows up making faces at him.
C
2 people found this helpful

errin spellingReviewed in the United States on November 14, 2018
5.0 out of 5 stars
A true gentleman
Verified purchase
An older man who wrote horror movies and just wants to be an artist is very ill in his old age. He was not swayed by the politics of Hollywood and posh rude people. He happens to be gay and finds a friendship ,with a young heterosexual man. The scenery is beautiful. The story is moving. A very entertaining film.
8 people found this helpful

K. E. StranskyReviewed in the United States on October 10, 2020
5.0 out of 5 stars
An Incredible Treasure of a Movie, Touching and Full of Mystery
Verified purchase
I don't even know how I fell upon this movie yet I am so incredibly happy that I did. The story is just out of this world perfect. The casting of the three main characters also is perfect. AND the acting performances of these three actors put the movie over the top for one of the best movies I have seen in a long time.
One person found this helpful
See all reviews
Back to top
Get to Know Us
Make Money with Us
Amazon Payment Products
Let Us Help You
EnglishChoose a language for shopping. United StatesChoose a country/region for shopping.
© 1996-2022, Amazon.com, Inc. or its affiliates