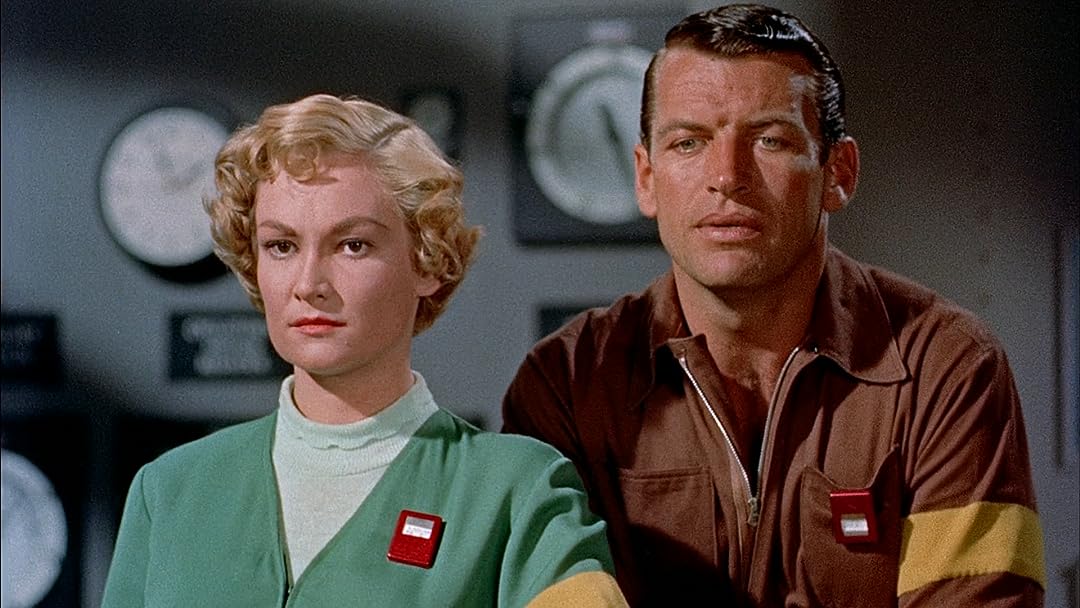 QuarxReviewed in the United States on March 30, 2019
4.0 out of 5 stars
Straining to Unsee Daleks Trekking through Forbidden Corridors with Flamethrowers Galore at the End
Verified purchase
All the reviews have something in common - this is not a good movie, but the production is impressive for the budget and the 3D restoration is outstanding. An educated cinephile cannot fail to see many of the subsequent imagery from sci-fi movies: the Daleks from Doctor Who, the research facility buried in the desert from The Andromeda Strain, the immense halls lined with machinery from Forbidden Planet, the automatic elevator opening doors from Star Trek - and the IBM typewriter which stands at the input end of 1950s computing assemblies, which are credited to Bendix here (when was the last time computers are actually identified and credited in a movie?) Toward the end we get to see some F-86 Sabrejets (filmed onsite) mixed in with some stock and non-3D Air Force footage of other jets and personnel pushing buttons. A snapshot in time, then.

Now, for the 3D. The sets feature some interesting architecture with striated glass blocks flanking door frames and luminous corridors. The color palette is your basic primaries, also evident in Star Trek - but sparse; this gives a certain crispness to the lot and you’re beginning to see the modernist cues that would soon feature in many other period films. The action is slow, the actors face the camera, the robots almost bounce into the walls on a couple of occasions. That said, the director’s patience is evident and the result is meticulously crafted. The 3D effects are basic, but seem to work better than the competition (sorry, Tom Cruise’s Mummy is no match). The realistic sci-fi has lots of mansplaining throughout (and the “women are better suited for space travel” quip for good measure), which was the producer’s preference, but the set details are very, very, very good. The producer eventually moved on to things like Flipper and Daktari, and most of his work retained the attention to detail evident here. We also lose a couple of women in the “action” so this is Equal Dispatching Opportunity territory.

As many other reviewers proclaim, the movie may be somewhere above 2 stars, but the overall production is above 3 and the restored blu-ray puts it above 4. Not a cheap buy. One to remember, though.

ElsinoreReviewed in the United States on July 21, 2017
5.0 out of 5 stars
GOG: Restored 3D Blu Ray - WOW!
Verified purchase
I've seen this film in many versions - bad B/W tv version, field sequential 3D DVDs created by fans on EBay, color 2D versions, etc. - but NOTHING like this! Thank you Kino, Bob, Greg and everyone involved. Beautiful vivid color! Perfectly aligned, ghost-free, stunning 3D! Like seeing it for the first time! (Played on PS4 via 2.2 compliant HDMI cable to LG OLED65E6P tv in passive 3D.)

Love this movie. Like a time capsule of Cold War America, complete with wild claims of enemy (Soviet) weapons in space, underground nuclear research bunker, crazy (pretty awful) mysogeny of women, rockets, fighter jets, "futuristic" dials and gizmos and killer robots! One character is told, "Nothing to worry about. You just got a bit too much radiation." (!)

Highly recommended for those interested in a funny, scary, fascinating look into the 50's American mindset. Extras are great. I think I see myself in the photo of a crowd at the World 3D Expo at the Egyptian (shown in the excellent restoration mini-documentary). Haha. This blu ray is my new favorite "classic 3D" film. Get it while you can!

It became clear while watching it that this movie was meant to be seen in 3D, just like many of the other movies released in the 3D format from that era. If you like Golden Age 3D movies, "Gog" is highly recommended. You will not be disappointed. Colors pop and the 3D is excellent. Congratulations to the people who restored this movie to its original format.
12 people found this helpful

Chip KaufmannReviewed in the United States on September 11, 2019
4.0 out of 5 stars
A Remarkable Time Capsule Of A Movie.
Verified purchase
Producer-Director Ivan Tors (1916-1983) is best known today as the man behind the original SEA HUNT series with Lloyd Bridges and a number of animal themed movies and shows in the 1960s such as FLIPPER and DAKTARI. However in the early 1950s he was interested in science-fiction. Before his SCIENCE FICTION TV series (1955-57), he made a trio of science fiction films involving the fictional OSI (Office of Scientific Investigation). GOG is the third and best of the 3 movies (the other 2 are MAGNETIC MONSTER and RIDERS TO THE STARS).

As has been mentioned in many other reviews, GOG is a precursor to several future sci-fi movies and TV series such as FORBIDDEN PLANET (the Krell machinery), THE ANDROMEDA STRAIN (the underground facilities), DR WHO (the Daleks), STAR TREK (the interiors of the Enterprise), and even STAR WARS (R2-D2 moves like the robots in this film and both utilize little people to make them work). It also is a reflection of the Cold War and "Race for Space" mentality so prevalent right after the Korean War.

I first saw GOG on TV in the early 1960s in black & white. I vividly remember the metallic letters above the swirling smoke that open the movie as well as the glass breaking sound of the frozen scientist when he falls. I didn't know the film was in color and now that I have seen it that way, I realize just how much care went into the making of GOG which belies its modest budget ($250,000). The colors used, the sets and costumes, the camerawork, the lighting are all first rate. The performances are great considering the script.

The plot combines elements of mystery (who is killing the scientists), espionage (who or what is behind the sabotage) along with the science-fiction. It also provides us with a look back at the early stages of computer development and space research and it uncannily foreshadows how technology will eventually control our lives as we become increasingly dependent on it and are at its mercy when it fails to work the way its makers intended. Two of the characters even say as much as their situation worsens.

I have not seen the new 3-D restoration but judging from the other reviews, it must be excellent. My review is based on the old MGM Limited Edition 2-D DVD-R which came out in 2011 and is less expensive than the new release. The picture is sharp , the sound effects are vivid, and the dialogue easy to follow. Surprisingly, GOG is remarkably free of 1950s sexism (outside of a few lines) as the women work on par with the men. It is truly a remarkable time capsule of a movie that remains highly enjoyable.
One person found this helpful

James C SmithReviewed in the United States on January 27, 2020
2.0 out of 5 stars
Dry As Day-Old Toast
Verified purchase
I have been curious about this movie for a long time now, so I was glad to see last night that Amazon had "Included (it) With Prime". This film is considered to be part of a trilogy of sorts that includes “Magnetic Monster”, which I consider a ‘50s Sci Fi classic and like a great deal. However, in what I had read about “Gog”, it didn’t make me want to drop $20 or so on the Blu-ray, just to find out. After all, “Riders to the Stars” was as dull as could be.

So to avoid irritating fans of this movie, I’ll simply say Amazon just saved me $20. I found the script, in terms of both story and dialog, to be very dry, lacking skill, and unimaginative. I’m sure watching it in 3D would make it much more entertaining, but the additional visual fun wouldn’t overcome the pervasive dullness of this tale.

Thank you, Amazon Prime! I scratched the itch of curiosity without wasting money and adding yet another disc to my collection that would simply take up space.
One person found this helpful

azogReviewed in the United States on May 3, 2021
2.0 out of 5 stars
Gog me with a spoon
Verified purchase
Robots with flailing arms are always a red flag. Hysterical fainting women mean danger is afoot. Throw in a bunch of random scientific equipment for good measure. Then you have a super secret project with the might to call in USAF, but they're strangely lax in terms of safety protocols or mechanisms. The control rod is RIGHT THERE, labeled as such, not even locked, where any random robot could stroll in to cause an atomic pile to explode.

In all seriousness, this movie from 1954 is seven years before the Soviets orbited a man around in the earth in 1961, so a lot of science here is rubbish when seen thru the lens of almost 70 years. And the poor science is probably the best part of the movie. The movie did not age well.

Solid Snake86Reviewed in the United States on March 31, 2020
2.0 out of 5 stars
Not What I Expected...
Verified purchase
I love '50 sci-fi films, and Gog seemed like it would be right up my alley. Well, this wasn't one for me. The pacing was terrible, rife with extremely monotonous sequences, uninteresting characters, and poor usage of 3D. Nearly every scene could have been trimmed, right from the overlong opening where they freeze a monkey (and the movie's already only 80-something minutes, which is telling). I could barely finish this one, that's how off-put I was.

Looking for some great '50s sci-fi and/or horror films in 3D? Try Creature from the Black Lagoon, The Maze, The Mad Magician, It Came from Outer Space, and House of Wax instead.

WALTReviewed in the United States on April 27, 2021
5.0 out of 5 stars
ONE OF THE BEST FIFTIES SY FYS
Verified purchase
THIS IS A PHENOMENAL SCIENCE FICTION MOVIE, NOW IN DAZZLING HD COLOR. IT WAS ALWAYS ONE OF MY FAVORITES. THE
SPECIAL EFFECTS ARE BREATHTAKING. AN UNDERGROUND SECRET FACILITY IS BEING INFILTRATED BY AN ALIEN SHIP AND EVERY TYPE OF MISHAP IS OCCURRING AND DEATHS RESULT, SO A HIGH LEVEL INTELLIGENCE OFFICER IS SENT, I.E. RICHARD EGAN, A FORMER REAL LIFE ARMY JUDO AND KNIFE FIGHTING INSTRUCTOR. THE WONDERFUL ACTOR HERBERT MARSHALL ALSO APPEARS.
TWO DEADLY ROBOTS ARE INCLUDED IN THE THRILLS. THIS IS FOR VERY MATURE TEENS AND PARENTS ARMED WITH A LOT OF POPCORN. SUPER HD COLOR AND SOUND . I KNOW YOU WILL LOVE THIS FILM.
See all reviews
Back to top
Get to Know Us
Make Money with Us
Amazon Payment Products
Let Us Help You
EnglishChoose a language for shopping. United StatesChoose a country/region for shopping.
© 1996-2022, Amazon.com, Inc. or its affiliates