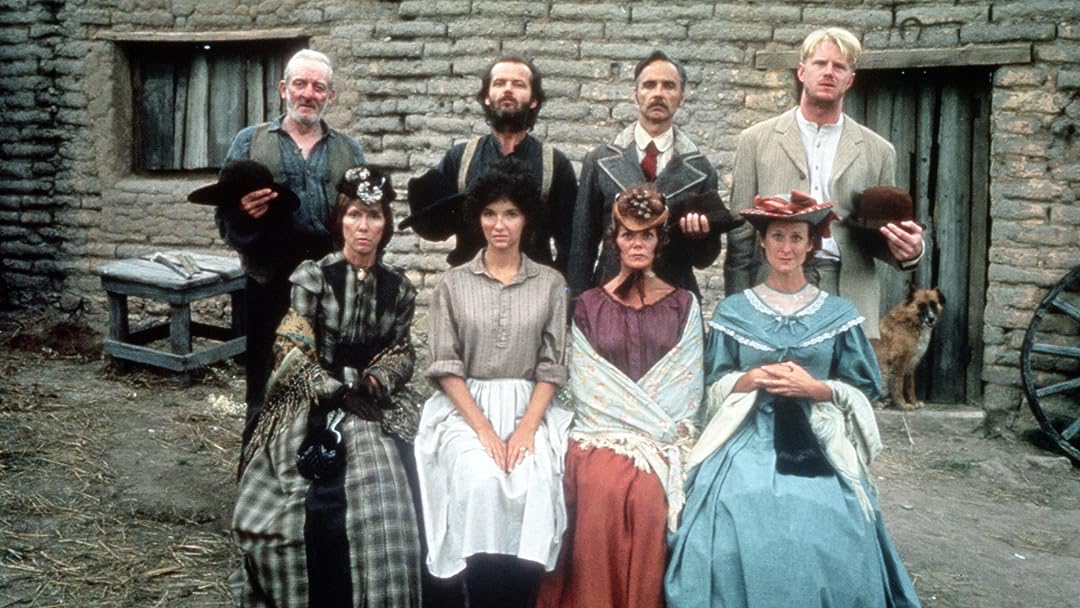 (1,067)
6.21 h 48 min1978X-RayPG
According to the laws of the Old West town where criminal Henry Lloyd Moon (Jack Nicholson) is about to be executed, a death row convict will be spared if a reputable woman promises to marry him and mend his ways. When Julia Tate (Mary Steenburgen) vouches for Henry, he is allowed to walk free, but now must deal with his old gang, the Sheriff, the bank, and his new wife.

Joe F.Reviewed in the United States on July 30, 2019
4.0 out of 5 stars
Learning The Amazon Star Rating System
Verified purchase
I think I've got it figured out now:
If a movie has 4-5 stars with over 100 reviews, subtract 1.5 stars to get the actual rating.
People here tend to be very generous with the stars, unless...

If it has 2-3 stars with <20 reviews, check it out - it might be a 4 star movie.
Yeah - excellent films that are not mainstream draw fewer viewers, which translates to: those expecting Disney dropping the rating with 1 star, versus those who appreciate the unique, unusual, or "different" (as the better movies tend to be) and leave 4-5 stars. A lot of British works fall into this category.

This movie is a 3.5 star movie. 4 stars if you like Jack, or comedy Westerns.
For some reason about a quarter of the way in Jack starts sounding like he's got a cold; very nasal. Maybe I wasn't paying attention to the plot when he caught it.

Anyway... it's cute and entertaining if you're in the mood for something light.
Better than most of the Hollywood pap you'll find here, but only a little.

Zachary LittrellReviewed in the United States on August 10, 2019
2.0 out of 5 stars
A Western Spoof where a stuck-up virgin marries a monkey
Verified purchase
There is something awfully exciting about the beginning. A wily criminal saved from the noose thanks to a pretty but cold maid. It's almost downright Shakespearean and could've been an absolute hoot. The problem is the movie never figures out what to do with that once it gets the rogue and the virgin together. It kinda just putters around for the last half to a perplexing last 10 minutes, losing its way and humor (and Jack Nicholson inexplicably gaining a nasally tone).

It's also, I'd hate to say it, not cast very well. Mary Steenburgen is a fine actress, and for a first role, this was good -- but she was not the battleax shrew needed to verbally and physically spar with a thief. Jack Nicholson's Moon, on the other hand, never seems that dangerous or unreliable. He's just a mischievous monkey with poor communication skills. Their chemistry is constantly neutral, and they seem to win each other over purely out of exhaustion.

At the end of the day, it's amusing enough. It's an OK movie to run in the background. But there's a nagging feeling that so much talent in this movie is given nothing to do except chew cud and wait for their cues.
18 people found this helpful

DetectorReviewed in the United States on August 18, 2019
5.0 out of 5 stars
fun as heck movie
Verified purchase
nicholson, steenberger, Chris Lloyd, Belushi...funny folk, and it's a fun movie, maybe the best comic western I've seen; production values, theme, and writing have held up just fine, unlike so many 70s and 80s movies, though "Me Too" activists might object to the tied up maiden bit, which seemed just fine back then. Nicholson, who seems to be late 30s to early 40s here does a tour de force as the irrepressible outlaw with a heart of gold, Steenberger was inspired casting to play the beleaguered schoolmarm maiden with a marshmallow center whom Nicholson melts. It was engaging, funny, and it had gold, lots of it, just the way I like it. Also had a key scene for a horse actor, which was a hoot. And yeah, Jack does sound nasal in the latter scenes, and even looks like he has a cold,I dunno if all those particular scenes were all shot while he was stuffed up, or if he was stoned in those scenes and got nasal for whatever reason...it's a mystery.
11 people found this helpful

JASReviewed in the United States on September 6, 2020
5.0 out of 5 stars
Classic Jack!
Verified purchase
I had no idea of this movie until recently. But being a fan of Jack Nicholson I wanted to try something with him in it and this movie definitely didn’t disappoint me.

Movie starts off with Jack in prison, days away from being sentenced to a hanging. Some interesting town law allows him to be rescued from this fate if someone marries him. From there you see him being worked like a mule, stalked or set up to fail while dealing with his new wife. Really trying hard not to spoil this movie for anyone interested, so pardon the vagueness.

It’s been a fun watch, there’s some things that probably didn’t age well humor wise but I’ll definitely watch it again, still wanting to get more classic flicks with Jack Nicholson. It being a comedic movie was an unexpected surprise for me, I just expected a western like movie.
3 people found this helpful

catch22Reviewed in the United States on August 12, 2019
4.0 out of 5 stars
Not disappointing
Verified purchase
An early Jack Nicholson, directed by him as well. Charming little movie with a boat load of whacky characters. You'll see some Hollywood favorites show up in the scenes. Light hearted and fun. I don't like all Jack Nicholsons movies, but this one tickled my funny bone most delightfully.
8 people found this helpful

ColinReviewed in the United States on November 27, 2021
3.0 out of 5 stars
the whole not the sum of its parts
Verified purchase
Goin' South is an odd movie. It's got a great cast and scenery, superb camera work, an interesting premise and some fun bits, here & there, but it doesn't ever get going. The chemistry between Nicholson and Steenburgen just isn't there. The writing comes across like an early draft. I paused the movie quite a bit to do other things. I know I'd be fidgeting in my chair, if I saw it on the big screen, waiting for it to get over with. Things just happen, like the mine explosion. The pacing and editing don't support the exaggerated, comedic characters. "Goin' South" doesn't have the zing of "Blazing Saddles," which set the standard for mixing comedy and Western. It could be because the latter put comedy first. With the cast Nicholson was working with, that would have been the best way forward, yet the movie wavered between comedy and just another Western. It's a decently made oddity with good production values. I enjoyed moments, but I have no plans to sit through it, again.

Amazon CustomerReviewed in the United States on January 6, 2021
1.0 out of 5 stars
horrible
Verified purchase
horrible. no other word for it. the plot made no sense, the characters were incoherent, beyond western stereotypes. The script must have been written by a 6-year old. nicholson's character was stupid, and his directing was no better. if this was steenburgen's first film, she must look back with sorrow, wondering how her career ever succeeded after this disaster.
One person found this helpful

ciciReviewed in the United States on February 2, 2021
5.0 out of 5 stars
Entertainment at its best with Excellent Actors...you'll have a smile on your face!
Verified purchase
Jack Nicholson, Mary Steenburgen, Christopher Lloyd are at their best.
I have only seen Nicholson in three films. I just don't care for him...maybe its the faces he makes, maybe its the characters he plays...but I needed something to entertain and saw Kimmel interviewing Mary Steenburgen...I've always liked her...she mentioned the film Goin'South...so here I am.. She is super young. then...and still is!
Wonderful depiction about the Old West and outlaws and the women in their lives. It is done without all the violence and sex in films that are done now a days.
See all reviews
Back to top
Get to Know Us
Make Money with Us
Amazon Payment Products
Let Us Help You
EnglishChoose a language for shopping. United StatesChoose a country/region for shopping.
© 1996-2022, Amazon.com, Inc. or its affiliates