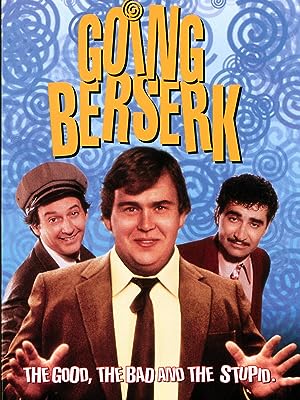 Francis Booth LynchReviewed in the United States on January 1, 2021
1.0 out of 5 stars
SCTV brought to the big screen, sort of
Verified purchase
Movie 4 of 1983 and 104 overall in my journey through films of my lifetime.

Opposite problem of "Terms of Endearment" in that I LOVED the cast and what a cast! "Going Berserk" promised to be "SCTV" come to life on the silver screen. The future would be very kind to this cast. John Candy is in my top five all time favorite celebrities and film stars so it promised to be wonderful to see him in something that was new to me.

Where "Going Berserk" failed was not in its cast however, it failed at its most critical effort: comedy. In fact I would call it "amateurish." Jokes had zero set up, zero payoff, just sophomoric antics. It feels very similar to "Happy Gilmore" not in terms of quality or comedy but in terms of the flow of the story. Events just happen. Please don't make the mistake of thinking I don't like "Happy Gilmore!" John Candy's comedic stylings were present but didn't help. They even went as far as to include successful "SCTV" skits! They used Candy's "Leave it to Beaver" skit and Eugene Levy's squeeky - cart - down - the - isle gag. Unfortunately they put little effort into fitting these in because they were out of place. In fact if one were not familiar with "SCTV" some of this actually would have made no sense!

Movie references from the past "Cool Hand Luke," "The Blue Lagoon, " and "Dog Day Afternoon" the later two of which I only have seen due to this retrospective which is the point of the whole thing! I really love that because it's a unique way of studying American Cultural history and my own history.

Movies it preceded (reluctant to say "inspired") "Weekend at Bernie's," and no that gag wasn't funny here either, and "Uncle Buck" in it's dance scene.

The 80's had a fascination with "Punk rockers." If you are not familiar with them they usually were seen with jam boxes had leather and/or denim jackets with drawings on them, mohawks and were basically responsible, in the movies, for random trouble. Think Billy Idol. Star Trek: The Voyage Home" Comes to mind as well (bus scene). If you wanted to show someone in trouble they usually did the trick although I was friends with these types and they were actually no trouble at all.

Is "Going Berserk" a nexus where the past and future meet? No movie in this retrospective came even close to accomplishing all of my goals as much as this did. It even hit the nostalgia spot a ton. For example the intro. It was the kind of underground hip-hop that was so rare at that time like "Roxanne, Roxanne" by "UTFO."

So I have to say that I found things I personally liked but I can't recommend "Going Berserk" because I don't want to waste someone's time that might want to buy this. I'd stay away.

Pros
-great for this retrospective
-incredible, all star cast

PRESIDENT MERV.Reviewed in the United States on April 13, 2017
5.0 out of 5 stars
AN OBSCURE COMIC TREASURE
Verified purchase
This is a VERY funny comedy. While there are many funny moments, there are two scenes that are hysterically funny. One of the two may be the funniest scene in any movie ever made. Of course, comedy is in the eye of the beholder. Like in many comedies, much of the plot is silly and some of the fun is raunchy, If you are a fan of John Candy, Eugene Levy, and Second City, you will surely enjoy this movie. If you are not already fans, perhaps this is not for you. I would recommend this comedy to anyone who enjoyed "Blazing Saddles", "Rat Race", and "There Is Something About Mary." If you found those films funny, I guarantee you will laugh your head off at this one. One of the joys is discovering this obscure film and being one of the very few people to see and enjoy it.
7 people found this helpful

David E. BaldwinReviewed in the United States on February 18, 2011
5.0 out of 5 stars
Los Beatles! Ringo! Pablo! Juan! Jorge!
Verified purchase
The Leonard Maltin movie guide gives this flick the dreaded BOMB rating. Either Siskel or Ebert put this on their ten worst list the year it came out. Either this raucously funny film was ahead of it's time or these guys completely missed the boat. This movie is like a ribald episode of SCTV. I'm a fan of the warm and fuzzy John Candy of "Uncle Buck" but it's pretty cool seeing him play a character with an edge. The proceedings are virtually stolen by a hilarious Eugene Levy as Sal Dee-Pas-Qual-ee. I was in tears when Di Pasquale, filming Candy's wedding, rolls a squeaky shopping cart down the church aisle with a cameraman inside attempting a tracking shot. This is a rather obscure entry in the Candy-SCTV canon that deserves serious re-evaluation.
5 people found this helpful

Nina L. MurphyReviewed in the United States on February 17, 2016
4.0 out of 5 stars
A Fun Filled Movie
Verified purchase
A great movie with 2 of my favorite actors, John Candy and Eugene Levy. This movie will keep you laughing all the way thru the movie.
Price is right for a good laugh. Packed well and got to me in a timely fashion. Highly recommended.
Nina of San Rafael, CA
2 people found this helpful

Rebecca StanleyReviewed in the United States on April 3, 2017
3.0 out of 5 stars
A decent comedy
Verified purchase
Not one of his best movies I'm afraid. But still I collect all I can find of John Candy
3 people found this helpful

Phil SilvermanReviewed in the United States on July 24, 2011
3.0 out of 5 stars
Okay for SCTV fans
Verified purchase
Occasionally hilarious mild spoof with three top SCTV stars. Candy is a naive, mixed up limousine driver, in business with Falherty; both are old time friends with a Z-movie Director Eugene Levy, who extorts a photography gig from candy's future Father-In-Law, a Congressman with a view to the Presidency.

The plot is funny, with semi-successful but entertaining spoofs of Father Knows Best, Leave It To Beaver, MTV, and just about everything else for the Baby Boomers. Candy and Flaherty play it up like an '80s Abbott and Costello, Joe's character is even caklled "Chic", a familiar name that Abbott used in (as I recall) A & C MEET FRANKENSTEIN.

The movie itself is something of a spoof of The Manchurian Candidate - the angle here is that Candy is so confused that hypnosis (from a Cultist group intent on removing the Congressman) just won't take.

Do not want to play "spoiler", so check out this DVD if you loved SCTV.

Some surprising, depressing, racial content, to drag this effort down a few notches.
3 people found this helpful

JK-James L. KramerReviewed in the United States on September 11, 2014
5.0 out of 5 stars
One of the funniest John Candy moveies ever!
Verified purchase
This movie manages to make fun of just about everything you can imagine, from politics and religious cults to the "yoga craze", Kung Fu movies and sleazy movie producers. Not for "young viewers", to be sure, but the courtroom scene, followed by the apartment hallway scene will have you laughing so hard you will probably wet yourself...
4 people found this helpful

MuaddivReviewed in the United States on January 6, 2018
5.0 out of 5 stars
Beserk!!
Verified purchase
John Candy & Second Theater at its best!!!
2 people found this helpful
See all reviews
Back to top
Get to Know Us
Make Money with Us
Amazon Payment Products
Let Us Help You
EnglishChoose a language for shopping. United StatesChoose a country/region for shopping.
© 1996-2021, Amazon.com, Inc. or its affiliates