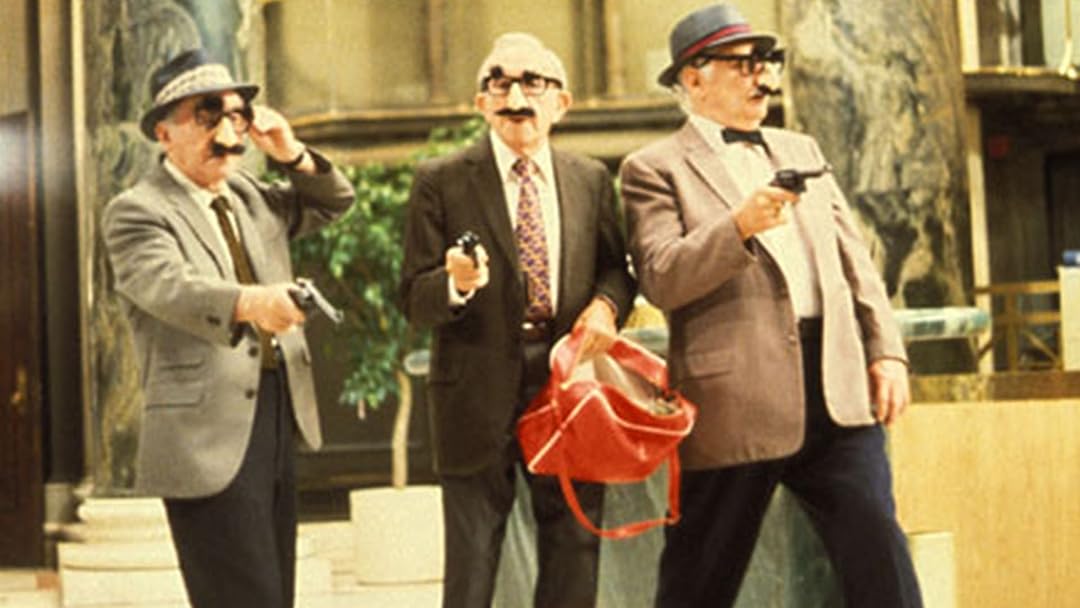 Movie ManiaReviewed in the United States on August 31, 2018
4.0 out of 5 stars
Two recent Oscar winners follow up their wins with a charming Heist film
Verified purchase
Oscar winners Art Carney (Best Actor - Harry and Tonto) and George Burns (Best Supporting Actor - The Sunshine Boys) follow up thier wins with this charming caper film. Art Carney, George Burns and the legendary acting coach Lee Strausberg are three retirees who are barely making ends meet. When one of them come up with the idea of robbing a bank. Even if they get caught they will only do three years and that means they would each have 36 social security checks waiting for them and they could buy a news stand.
This is a charming film that shows that the older generation still has a lot of life in them (well sort of). It is a bit dated but still applies. Burns and Carney give great performances and are worth spending your time with.
2 people found this helpful

SciFi-Kaiju-Guy @ TeePublicReviewed in the United States on December 22, 2013
5.0 out of 5 stars
Burns, Carney & Strasberg at their best!!! (This wonderful film desperately needs a hi-def remastering & release onto Blu-ray!)
Verified purchase
BOTTOM LINE: One of the best comedies ever made. Never loses its replay value and is still fairly relevant with regards to its funny yet frank look at society and how we view the elderly. And the three leads are at the top of their game here. Well worth owning, GOING IN STYLE comes very highly recommended. 5 STARS

THE STORY (contains minor spoilers): Three elderly retirees sharing an apartment spend their days doing the same old, same old. Tired of the routine, one of them comes up with a plan to alleviate their boredom: rob a bank! If they succeed they'll have a blast doing something different, dangerous & exciting, (plus more money to spend in their golden years than they could have ever imagined). If they're caught, they'll simply spend a few years in jail with three meals a day and a clean place to sleep. As a bonus, when they're released each will have a tidy amount waiting for them in the form of a stack of uncashed Social Security paychecks accrued during their incarceration. It seems like a "win-win" and after some discussion, they agree... and the adventure begins. What happens along the way is something truly moving and genuinely magical for movie fans.

THOUGHTS: One of the best movies with a focus on older folks EVER made. Each of the three main actors gets his opportunity to shine and they all do, with gusto. This film is, without a doubt, George Burns' best work as a movie actor. He simply IS the heart of this piece. By turns Burns is sympathetic, bitter, confused, remorseful, angry, delighted, ashamed, self-loathing and, of course, always cantankerous. He's just pitch-perfect here. Relatively new at the time actor Charles Hallahan really shines in a small but memorable role playing Pete, the nephew of Art Carney's delightfully loveable teddy bear character, Al. Art Carney is a joy to watch, stealing every scene he's in. The Vegas crap table scene is pure movie magic, with two old pros just having an absolute blast and they play off one another hilariously. Lee Strasberg doesn't get much screen time, but the pivotal scene between him & Art Carney really packs a punch, and demonstrates why Strassberg is such a well-respected acting legend. It's still hard to believe that a movie about the elderly could be so winning, insightful and touching... and yet was scripted by then-27 year-old writer/director Martin Brest! Bravo!

THE DVD: This is an early Warner Bros release in one of those annoying old style cardboard snapcases. Video & audio are solid but nothing to rave about. There are no extras beyond the film's theatrical trailer, which is a disappointment. Sadly, all the main contributors of this terrific little motion picture have long since passed on now, with the exception of director Martin Brest. WB really dropped the ball by not tasking someone with getting interviews with and/or commentary from Burns & Carney while they were still with us. ***GOING IN STYLE is being remade, though the plot of the new version suggests a very loose adaption more than a direct remake. Even so, let's just hope that smarter heads prevail and this original version gets dusted off & properly restored/remastered onto Blu-ray. And hopefully, someone will dig thru the archives and unearth interviews, talk show appearances with the actors, and other bits to include as bonus material for a newer, high-def release, (let's at least hear a retrospective director's commentary from Martin Brest!). A movie this impressive and entertaining deserves better treatment and is long overdue for a remastering. But even here on this barebones release, GOING IN STYLE easily rates a solid 5 STARS!

D.D.Reviewed in the United States on December 11, 2018
5.0 out of 5 stars
Three Legends!
Verified purchase
Comedic & touching performances by Burns, Carney and Strasberg. This movie is also a terrific sentimental journey back to New York City in the late 70's, way before the sanitized, gentrified place it's now become.
4 people found this helpful

B. J. ArchuletaReviewed in the United States on December 30, 2018
4.0 out of 5 stars
Better than remake.
Verified purchase
I loved this movie, the characters were great and I enjoyed the story. I have seen the remake but this was so much better. Also the plus is seeing my dad as one of the crap dealers was awesome.
4 people found this helpful

john pereaReviewed in the United States on January 20, 2016
5.0 out of 5 stars
Timeless classic with 3 of the finest actors of all time.
Verified purchase
I suddenly remembered this movie recently after originally seeing it when it came out. Fortunately Amazon had it and I was able to watch it again after all these years. It's even better than I remembered it. I also found out they just remade it with Michael Caine, Morgan Freeman, Alan Arkin and Ann Margaret. It'll be interesting to see it updated.
7 people found this helpful

v. palladinoReviewed in the United States on September 10, 2021
5.0 out of 5 stars
Fantastic & Funny Movie
Verified purchase
Loved this movie. Had seen it when it first shown was in Theatres, and always wanted to own it. All great actors and a very amusing storyline. Now it is a DVD treasure.

Ted The FiddlerReviewed in the United States on November 29, 2021
5.0 out of 5 stars
The Original
Verified purchase
A lot darker than the remake. The remake is almost a different story but equally good. We went looking for this version right after we saw the new version.
See all reviews
Back to top
Get to Know Us
Make Money with Us
Amazon Payment Products
Let Us Help You
EnglishChoose a language for shopping. United StatesChoose a country/region for shopping.
© 1996-2021, Amazon.com, Inc. or its affiliates