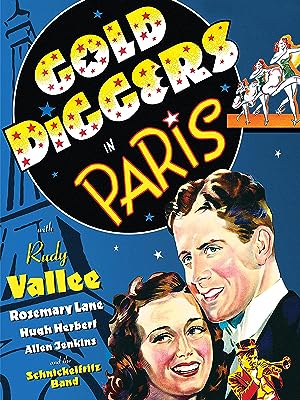 (19)
1 h 37 min1938NR
The City of Lights will never be the same when the girls and the gangsters land on the continent. It's gams galore with the Gold Diggers in Paris!

Robert HayesReviewed in the United States on May 12, 2022
3.0 out of 5 stars
The French sure like their wine and cheese
Verified purchase
My least favorite of the Gold Diggers series, largely because most of the humor and gags fall flat. And there's also the sentient tree trunk (Rudy Vallee) which happens to have a rather mellifluous singing voice. Dick Powell he is not. And really, hardly anyone stands out in the cast. Allen Jenkins probably the most, and Hugh Herbert also, although he isn't in it as much as I would have liked. The only chorus girl who made an impression was Mabel Todd, who reminded me heavily of Kristin Chenoweth (sans Southern accent). As for Busby Berkeley, there was only one large production number at the end, which was good, but not nearly as much as most of the ones that preceded in this series and Berkeley's other work. Overall, I didn't hate it; I just rolled my eyes a lot.

Nom de PlumeReviewed in the United States on February 25, 2014
5.0 out of 5 stars
Very amusing video..
Verified purchase
If you're curious about what Paris was like in 1938, you'll need to watch this movie with Rudy Vallee. It appeared to be a fun year to have lived in. Rudy's acting was much better than what I had expected in a very good story. The choreography was fantastic. Nothing like it being produced today. Anyway, an excellent transaction and received the item as promised by the seller.
2 people found this helpful

Classic ActressReviewed in the United States on July 3, 2013
5.0 out of 5 stars
Fun Fun Fun
Verified purchase
This is a terrific, fun musical from the 1930s. The plot is a little silly but the singing and dancing makes it worth watching - you can never go wrong with Busby Berkeley's crazy choreography. There is an amazing cast here with Rosemary Lane, Rudy Valee, Gloria Dickson, and even a young Carole Landis. A must have for all classic movie fans!
3 people found this helpful

Craig DetmerReviewed in the United States on April 15, 2015
5.0 out of 5 stars
Great value for a classic musical.
Verified purchase
We enjoyed all of the Busby Berkeley films from Amazon, including this one. Lots of good music.
One person found this helpful

Dorothy S. Johnson Reviewed in the United States on July 19, 2013
5.0 out of 5 stars
arrived quickly
Verified purchase
I ordered this for my husband and he cant get enough of the music in this DVD he has viewed it over and over..
One person found this helpful

John W. HadbavnyReviewed in the United States on January 9, 2013
4.0 out of 5 stars
A Satisfying &#34;Early&#34; Musical
Verified purchase
I've always like Rudy Vallee's voice but didnt realized he could act. I actually bought it for the Freddie "Schnickelfritz" Fisher Band's footage. Restoration is excellent. Overall, a very pleasant "romp".

ASTERFRReviewed in the United States on May 20, 2017
5.0 out of 5 stars
Bonjour, c'est parfait,
Verified purchase
Bonjour,

Matthew G. SherwinReviewed in the United States on December 30, 2008
4.0 out of 5 stars
not so bad--but it's even better if you watch it at an angle
Gold Diggers in Paris is indeed the last installment in the Warner Brothers "Gold Diggers" series of films--and not a moment too soon! Yes, the film has quite a few good musical numbers and the acting is rather good; but that slapstick "Schnickelfritz Band" and Rudy Vallée's stiffness when he sings the opening number bring the film down to some degree.

When the action starts, we see that a New York City nightclub run by Terry Moore (Rudy Vallée) and Duke Dennis (Allen Jenkins) is a miserable financial flop. They even tell the help (Eddie 'Rochester' Anderson plays the doorman) to tell arriving customers to go away! Suddenly, a naïve Frenchman arrives at their club to invite them to participate in a fancy dance competition in Paris. Little does the Frenchman know that he has accidentally mistaken Terry, Duke and the young ladies who dance in the New York City nightclub for the Academy Ballet of America run by the great Padrinsky (Curt Bois)! Terry and Duke need the money so bad that they decide to go to France even though they know they'll be masquerading as the Academy Ballet of America.

Soon they're all on a ship bound for Paris--along with Mona, Terry's ex-wife who connives her way onboard in exchange for forgiveness on Terry's back alimony payments. Terry and Mona are divorced but Mona sticks around to make sure she'll get a part in the show when they get to Paris. All of this is unknown to Kay Morrow (Rosemary Lane), a very pretty dancer in the New York nightclub who strikes up a romance with Terry onboard the ship to France. Complications arise, of course, when Padrinsky and his Academy Ballet of America discover that the group bound for France is merely pretending to be them! Padrinsky immediately goes to Paris with his troupe--taking along with him his ballet-loving gangster buddy, Mike Coogan (Edward Brophy).

But questions remain unanswered. What will happen to Terry, Duke and their crew of young ladies if or when they are discovered as frauds? Will Padrinsky succeed in his efforts to replace them? What about Kay and Terry--will Kay forgive Terry for not telling her about his past marriage to Mona? No plot spoilers here--watch the movie and find out!

The film has fine musical numbers by Rudy Vallée even if he is a bit stiff when he sings, ""I Wanna Go Back to Bali." The finale is a wonderful feast for the eyes; Busby Berkeley did a great job of choreographing this elaborate sequence; and I'm sure you'll enjoy it. The DVD also comes with three extras; I especially liked the Merrie Melodies cartoon about Cinderella and the short about actors racing to get silly photographs of themselves is also very well done. Look for a very young Phil Silvers who acts wonderfully.

Overall, Gold Diggers In Paris deserves to be the last in the "Gold Diggers" series of films. It's probably the weakest "Gold Diggers" film; I missed seeing the actors from the other "Gold Diggers" films. In addition, "The Schnickelfritz Band" wears on me real quick. Nevertheless, the film does entertain--it's just that it doesn't entertain as well as its predecessors did. It is worth watching; but maybe you should see this one on a rainy day when nothing else is on TV.

Three and one-half stars.
8 people found this helpful
See all reviews
Back to top
Get to Know Us
Make Money with Us
Amazon Payment Products
Let Us Help You
EnglishChoose a language for shopping. United StatesChoose a country/region for shopping.
© 1996-2022, Amazon.com, Inc. or its affiliates