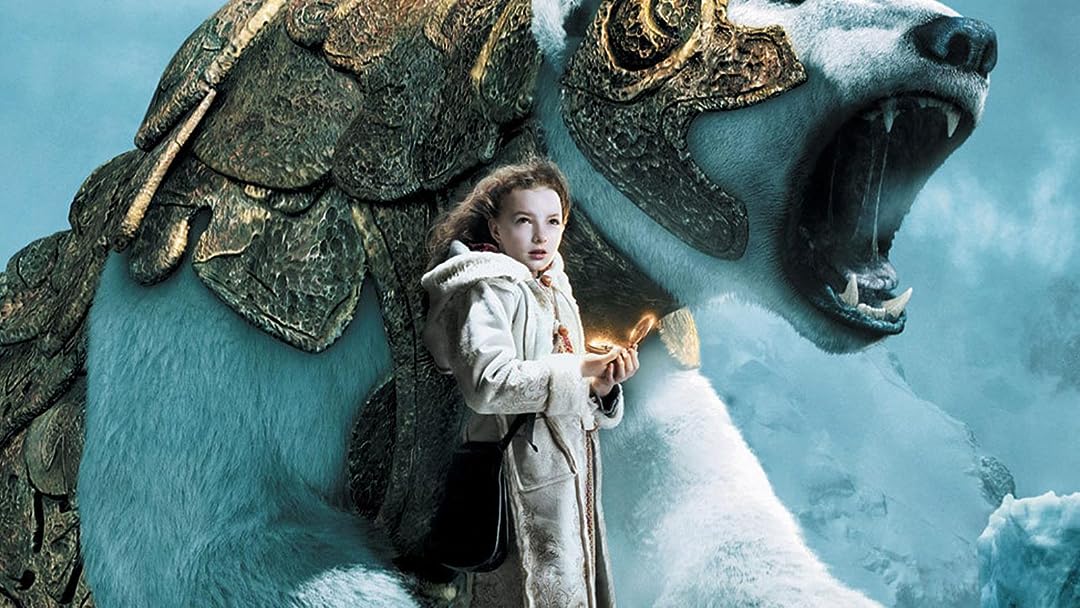 (2,737)
6.11 h 53 min2007X-RayPG-13
In a wondrous parallel world where witches soar the skies and Ice Bears rule the frozen North, one special girl is destined to hold the fate of the universe in her hands.

Joseph H. AllardReviewed in the United States on July 6, 2018
5.0 out of 5 stars
Loved it.
Verified purchase
Even an old man of 71 can enjoy this remarkable movie and its casts of actors. I was sad to read that there wasn't a sequel in part because the Catholic Church denounced the film. Apparently, because it would create atheism among children. The Magisterium vs the Catholic Church are the same in their efforts to control the masses. That is one of many reasons why I gave it a five.
38 people found this helpful

Eric SReviewed in the United States on July 5, 2018
2.0 out of 5 stars
Rushed story causes confusion. Skip this movie.
Verified purchase
If you love the books, skip this movie.

The casting is fantastic. The special effects are very good. But the story has been dumbed down and rushed so much that it's hardly recognizable. The dialog has been chopped together, to save time, I'm sure. But it does little justice to the actors' talent.

If you can't fit everything in one film, make it to parts. But don't butcher the story like this movie did. What a shame..... it could have been amazing.

alistairvilleReviewed in the United States on November 23, 2019
5.0 out of 5 stars
Cliffs/Coles Notes version but very well made movie- even though not what director wanted
Verified purchase
You’ll be disappointed if you’ve read “The Golden Compass”, book one of Pullman’s “His Dark Materials”. This is a précis version which leaves so much out - by the necessity of movie-length time - and commercial movie making. If you’re watching HBO’s tv series then this movie takes you to about series one, episode six, in a very rough way. On the other hand, for a Cliff’s/Cole’s notes version, it has high production values and is wonderfully cast, especially Sam Elliott as Scoresby and Nicole Kidman as Mrs. Coulter, but all actors perform more than credibly well. As always, I love Eva Green in this. Good direction and sets. Mrs. Coulter’s house is very Laura Ashley in the book, but not in this movie, and especially not in the HBO television series. The weakness of this movie is that it has only 110 minutes in which to perform a book with a somewhat bulkY plot. This means that the movie becomes a Readers’ Digest version. I felt that they did their best to follow the text up near to the end of Part One with some of later books thrown in - in the three part book. If you write a book that gets put into visual media, you really want a multi-episode big budget television adaption rather than a movie. Movies are too short to do most works justice. Certainly true here. You just can’t get a feeling for the Pullman trilogy from this, but you can get a feeling for the characters of Lyra, Lee Scorsbey, Serafina Peccola, & Mrs. Coulter. But truly, if, despite the high production values, sets, costumes, acting, etc., you have doubts, this actually is worth watching, but you need to read the books and/or watch the HBO series “His Dark Materials”.
5 people found this helpful

joel wingReviewed in the United States on August 1, 2020
3.0 out of 5 stars
Not as good as it could've been
Verified purchase
The Golden Compass is a fantasy story where a group called the Magisterium is seeking to control society by destroying free thought. The threat to their plans comes in the form of a young lady named Lyra (Dakota Blue Richards) who possesses the Golden Compass. It’s power is to always reveal the truth. The story is about whether Lyra can reveal the Magisterium’s plot.

The movie is full of magic and fantasy. People for instance have an animal spirit that always accompanies them called a daemon. There are witches and talking bears who are warriors. There’s evil as well in the form of Mrs. Coulter (Nicole Kidman) who is kidnapping children for the Magisterium. There are heroes as well such as Lyra’s uncle Lord Asriel (Daniel Craig) and Iorek Byrnison (Ian McKellen) who was once a prince among the bears and becomes Lyra’s protector.

For whatever reason ever since I saw The Golden Compass in a movie theater I thought it had too much going on. It introduces things like Dust and never says what it is. It has a big battle which makes no sense like bad guys with guns that get beat by a bunch of Lyra’s friends charging at them with swords.

It’s not bad overall, but it’s not as good as it could have been.
C
4 people found this helpful

Old AliceReviewed in the United States on May 19, 2018
5.0 out of 5 stars
Great movie!
Verified purchase
I read the book series decades ago, and barely remembered the story line... so watching the film, I didn't have expectations of seeing the entire story, since I can barely recall the story. That said, there were enough familiar elements to feel like it was true to what I remembered. The books were controversial at the time, because they appeared to be critical of religion. The 'daemons' were the manifestation of a person's soul, but in the books, they were physical and the person could talk to them. The books I had thought were a secular answer to the Narnia series, which were allegories of religion. The religious elements were muted, and you could easily see this as a typical 'good vs evil' fantasy movie, with no parallels to our world. Every single visual was stunning, the 'daemons' were so realistic and well done CGI, the acting was superb, and of course the caste all star. The action played at a breakneck pace, and because it was so dense, if you looked away, you missed something.

As an older adult, I still enjoyed watching it, and I would have LOVED this movie as a child. The only unfortunate thing, but which couldn't be helped, was the ending... which immediately makes you look forward to the sequel. A sequel that was never made. That's the only shame of it.
32 people found this helpful

Amazon CustomerReviewed in the United States on November 21, 2019
1.0 out of 5 stars
Great movie - horrible presentation (thanks to Amazon...)
Verified purchase
Great movie - every positive review is on point.

However, Amazon’s presentation (via the IMDB subscription, currently the only way to watch it) is horrific.
1. There are commercials every 10-15 minutes, typically around 2 minutes each break. Why is my movie experience broken up by this much commercial interference when I’m paying for Prime in the first place?

2. If that’s not bad enough, the commercials seem randomly placed instead of at scene transitions like you’d expect. In a few instance, the onset of the commercial actually breaks into the middle of a character’s line.

3. Why do I have to rewatch commercials over and over when I rewind the movie a bit? I was interrupted while watching and missed about five minutes just before one commercial break. It took me nearly 20 minutes to watch that 5 because the steam kept jumping back the beginning of that commercial set or the one before (can’t fast forward they those!) and wouldn’t let me start watching where I’d gotten interrupted.

If Amazon wants to post junk like this, at least give folks the option to buy the movie outright and watch under our own control.
7 people found this helpful

B. ChandlerReviewed in the United States on July 21, 2021
5.0 out of 5 stars
The names were changed to protect the innocent
Verified purchase
Come to think of it the whole story is about protecting the innocent.

Lyra (Dakota Blue Richards) was raised relatively unsupervised which lead to a wild childhood of mock-wars and mischievousness. An excellent liar who saves her from many situations, she may someday find her assets are liabilities. A chance visit by her uncle, Lord Asriel (Daniel Craig), will change her life forever.

Well movies can not be the book and many times for brevity speeches are cut and locations are rearranged (from a 400-page book to a 110-page script.) But you have to draw the line somewhere. Unfortunately, this is one of those times where they left the action in and changed the story from a multifaceted mystery to a black and white good guy vs. bad guy. We may as well have been watching Saturday afternoon cowboys with black and white hats. Some of the facets were skillfully woven into the non-verbal part of the film with the hope that you read the book and know what is happening. Still, the focus switched from a coming-of-age story to free the slaves and whatnot. And what is with introducing a bad guy from the next installment to an earlier scene at Jordan college that masking the turmoil of conciseness at the college?

I do agree that the movie needed to stop short of the cliffhanger end of the book. Let us see what happens when Lyra brings her father what he needs.

On the plus side, the costumes and props were excellent. The CGI did not overwhelm the story. Daemons knew their place. The music matched the scenes and did not overwhelm the dialog. They did a great job of choosing the actors. We can hope they will be around for “The Subtle Knife” (2009).” Nicole Kidman made a perfect Mrs. Coulter and the added scene where she slaps her monkey gives hope to become a more complex character. The voice of Iorek Byrnison (name changed) is Ian McKellen of “The Da Vinci Code” fame.

Well with any luck things may straighten out by the next installment.

OldwetcatReviewed in the United States on August 11, 2020
1.0 out of 5 stars
DISAPPOINTING!
Verified purchase
Had I not read the books and watched the HBO production I would have had no way of knowing what the story was. That being said having read the books and watched to HBO series I was very, very disappointed in this movie. There is no context for what is going on it just jumps from scene to disjointed scene. There is no substantive character development at all, not even the hint of a backstory on even the most prominent of characters. If you've read the books or seen the story on HBO don't subject yourself to this poorly written movie. If you have not yet done either the visual aspects of this movie are well done and sometimes stunning and you may be compelled to read the books or see the HBO series... it's really a great story turned into a poorly produced movie!
2 people found this helpful
See all reviews
Back to top
Get to Know Us
Make Money with Us
Amazon Payment Products
Let Us Help You
EnglishChoose a language for shopping. United StatesChoose a country/region for shopping.
© 1996-2022, Amazon.com, Inc. or its affiliates