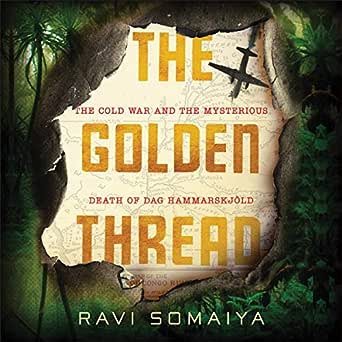 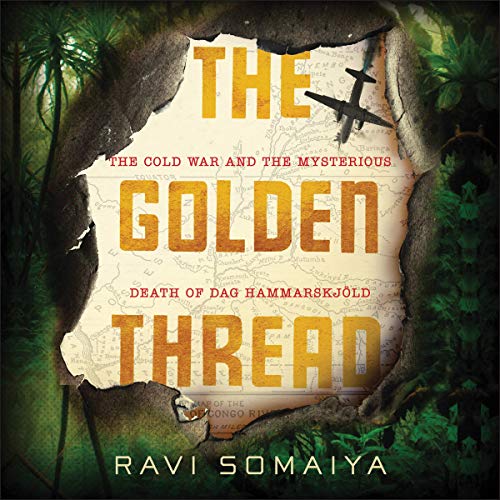 The Golden Thread: The Cold War and the Mysterious Death of Dag Hammarskjöld

4.7 out of 5 stars
4.7 out of 5
4 customer ratings
How does Amazon calculate star ratings?
Amazon calculates a product’s star ratings based on a machine learned model instead of a raw data average. The model takes into account factors including the age of a rating, whether the ratings are from verified purchasers, and factors that establish reviewer trustworthiness.
Top Reviews

Valerity
4.0 out of 5 stars Who killed the UN head?
Reviewed in the United States on July 7, 2020
There is plenty of intrigue to keep one following along in this book of spies and movers and shakers. I was never aware of all the dark power struggles that were going on so far back, and that there were all these foreign countries involved, playing games to rob them of their valuable resources. The movies later made us aware of blood diamonds, but that is just one part, it turns out, of what is being mined from Africa and making people rich. That all makes for big and sometimes violent power struggles.

When the UN tried to help, sometimes unwanted by a faction, they still tried to calm the situation. This book looks at what happened to Dag Hammarskjold when he tried to go to Ndola to negotiate peace in the area and was killed along with his aides and crew as they were about to land. It’s been a long-standing mystery as to what actually happened to his plane to cause the accident, even after the investigation was done. The author was able to find more information that was disregarded by the authorities from witnesses. Advanced electronic review copy was provided by NetGalley, author Ravi Somaiya, and the publisher.

I. David
5.0 out of 5 stars Great Mystery Arising Out of the Era When African Colonialization Was Changing to Self Rule
Reviewed in the United States on July 30, 2020
In The Golden Thread: The Cold War and the Mysterious Death of Dag Hammarskjold, Ravi Somaiya takes the reader back to the mid-20th century, a time when European colonization of Africa and Asia was being terminated in favor of self rule. I read many histories. But this is the first I have read about this era.

In 1960, when Belgium departed from the Congo (now known as the Democratic Republic of the Congo) the southernmost, and richest, province declared its independence as the State of Katanga. At the request of Congo’s Prime Minister, Patrice Lumumba, the United Nations sent armed forces to try to reunite Katanga with the Congo. From that point on the armed conflict was between UN forces and Katanga forces.

In the hopes of negotiating a peace settlement, on September 17, 1961, Secretary General of the UN, Dag Hammarskjold, embarked on a secret flight to an airport in Rhodesia to meet with Moise Tshombe, the head of Katanga. However, on its approach to the airport Hammarskjold’s plane crashed and he was killed.

Official inquiries conducted immediately after the crash, held by both Rhodesian and UN authorities, concluded that it was caused by pilot error. However, several people, primarily friends of Hammarskjold, did not trust the conclusions of these tribunals and commenced their own investigations. Throughout the years others have continued these investigations.

Somaiya masterfully describes these efforts to determine the exact events surrounding this plane crash. He explains why there were good reasons to disbelieve the conclusions of the original inquiries. The investigating tribunals, consisting of only white officials, summarily disregarded the testimony of multiple African witnesses who saw a second plane following Hammarskjold’s plane and possible flashes from that second plane before Hammarskjold’s plane went down. And these tribunals inexplicably failed to investigate the possible motives of others who might have wanted to prevent a peace agreement under which Congo’s new government ruled over a reunited Katanga.

Somaiya shrewdly reveals that there were plenty of entities with such motives. The European white nationalist mercenaries who were hired to fight for Katanga might have wanted the war to continue to protect their paychecks. The European mining company that was continuing to operate in Katanga might have feared the rule of Congo’s new government. And the United States and Britain might have been concerned that Congo’s new government was subject to Soviet influence.

As in any well-told mystery, Somaiya divulges new witnesses and additional pieces of relevant evidence that turn up every time someone new attempts to reopen the inquiry. And he increases the mystery and raises additional suspicions by pointing to numerous governmental agencies that continue to refuse to provide access to evidence that may be locked away in their archives.

While I always enjoy a good history book, they usually take some time to read. This is a rare history book that I could not put down. In addition to being a great mystery it was also an excellent reminder of the tragic harm caused by European colonization of the African continent. I give this book 5 stars and recommend it for anyone interested in a good true-life mystery, international diplomacy and/or 20th century history.