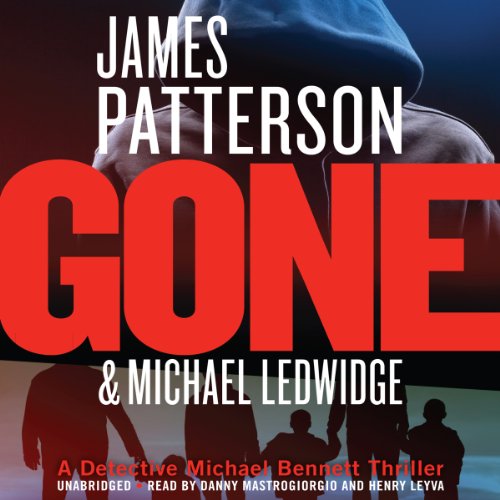 4.6 out of 5 stars
4.6 out of 5
3,738 global ratings
How are ratings calculated?
To calculate the overall star rating and percentage breakdown by star, we don’t use a simple average. Instead, our system considers things like how recent a review is and if the reviewer bought the item on Amazon. It also analyzes reviews to verify trustworthiness.

mitchgonz
5.0 out of 5 stars The book "GONE" at times will scare the HELL out of you!!!
Reviewed in the United States on August 24, 2018
Verified Purchase
I have been reading novels by James Patterson since I have been in my early thirties and now I am in my late 50’s. I have to say I can’t remember ever not enjoying reading his novels. He is the type of writer that gets you hooked into the story from page one and does not let you go until the very last word. He is that kind of talented writer. But in the novel GONE he took it to a whole new level for me. The way he wrote and weaved the story, the skill with the way he developed the criminal and his organization, at times, I have to say, it literally scared the HELL out of me. I have recommended novels by James Patterson to friends and family. As a matter of fact, my son had a reading class in High School that the course required reading a book and then briefly summarizing and making recommendations to the class as to whether they should read the novel. There wasn’t a reading list to choose from so my son asked to pick something out of my library. He came out with the first book showcasing Lindsay Boxer. The course was only a semester, but in that time he went through to the 11th book. Keep in mind my son didn’t read a lot, he preferred video games. I was quite surprised that once the class was over he continued to read that series and when he came to the end in the series he would ask when the next book was coming out. That is the kind of magic that James Patterson’s writing has. It made a reader out of a gamer. THANK YOU James Patterson!!!!! So in conclusion, if you are looking for some good reading pick up anything by James Patterson and you WILL NOT be disappointed!!!
Read more
8 people found this helpful
Helpful
Report abuse

Kim Turner
4.0 out of 5 stars Continuity
Reviewed in the United States on April 12, 2020
Verified Purchase
Loved the book. Only question is a continuity issue when Mary Catherine finds Leo and how she explained everything to Mike later. Without spoiling anything that's all I can really say. Like all of Pattersons books, it made me feel like I personally know all the characters and share emotions with them. I hated when I finished all the Alex Cross books but I'm loving Michael Bennett and his family now as well.
Read more
4 people found this helpful
Helpful
Report abuse

Colleen
5.0 out of 5 stars Great series
Reviewed in the United States on March 10, 2021
Verified Purchase
The Michael Bennett series has great characters and great plots without the gratuitous sex scenes of Patterson’s Alex Cross series (at least the two Cross books I tried but returned). I appreciate the characters in the Bennett series who embody, or at least struggle to embody, the best of humanity. This book 6, Gone, is my favorite so far.
Read more
One person found this helpful
Helpful
Report abuse

TUCSON ROBERT
3.0 out of 5 stars Mexican Killer
Reviewed in the United States on October 5, 2013
Verified Purchase
James Patterson's GONE stars Michael Bennett, former NYPD Detective now attached to the FBI. Mexican Cartel boss, Manuel Perrine, a very evil man, has been on a killing campaign directed not only at rival drug gangs in southern California but also the brutal termination of law enforcement officials. Bennett captured Perrine once before but he escaped while in his custody. Perrine publically threatened annihilation of Michael Bennett and his ten-member extended family. This resulted in Bennett and his family being placed in the witness protection program and secretly ensconced on a ranch in an isolated area of northern California.
The president declared Perrine the number one security threat to the United States. Michael Bennett is reluctantly dragged back into active service with the FBI to join the chase to bring Perrine to justice, thus leaving his family alone and vulnerable to Perrine's henchmen. The newly formed task force includes the FBI, CIA, NSA, and military special ops units from the three services.
The story bounces back-and-forth from tactics of the operational chase, to Bennett's family who are still in hiding, and to Perrine's personal and murderous activities in southern California and Mexico. Bennett's FBI partner, Emily Parker, seems to stay on the sidelines. Her character was never fully developed. I think she would have enhanced the story as a love interest. In fact many characters seem to make brief appearances and are never heard from again. The story seems to have no central theme and little spark.
The novel, co-authored by Michael Ledwidge, who I assume did most if not all the writing, is not one of Patterson's best--actually far from it.
I rate the novel a moderate 3.
Read more
5 people found this helpful
Helpful
Report abuse

porsche
5.0 out of 5 stars IT'S WAR!
Reviewed in the United States on January 11, 2014
Verified Purchase
I believe that this was one of JP's best books - at the end of the last Michael Bennett book, MB knows all too well that for the sake of himself and his family, he and his family need to go into hiding as he knows that Manuel Perrine will not forget what MB did to him and that Perrine will come after him and his family so as to exact his trademark retribution, which is merciless pain and death for MB and anyone he loves. But you just know that even in the Witness Protection Program, somewhere along the line, a man like Perrine, with his vast resources and power, will ultimately find MB and his family. And when it finally happens, MB decides to actually come out of hiding, he knows he must stop playing defense, definitely go on offense, and he knows that he will need some serious allies because this is definitely going to get ugly.

The book is very fast-paced, as JP's books usually are, and in the end, you truly get to appreciate what it truly takes to finally defeat one of the most powerful drug cartels - it's all out war with no holds barred!
Read more
6 people found this helpful
Helpful
Report abuse
See all reviews

Liz
5.0 out of 5 stars 2 "ERRORS"
Reviewed in the United Kingdom on March 3, 2021
Verified Purchase
Great reading. HAD to get to the end of it for the joy of reading it even though I know they survive, having read newer books in the series. A good un-put-downable story. However, being a sad person, I pick up on minutiae as you might call it - when Mike meets the two cops one is said to be a young man. So how in the next sentence can they be described as veteran cops? Also, when talking about Ireland it describes a man coming out of a house in a tam-o-shanter. It is the Scots that were this hat. Not the Irish!
Read more
Report abuse

Clive
4.0 out of 5 stars A straightforward fun read
Reviewed in the United Kingdom on November 24, 2014
Verified Purchase
A follow-up from “I, Michael Bennett”, and yes, I would recommend you read episode 5 before starting “Gone”. The story features Bennett and his large entourage of a family are hiding out in a remote farm, away from the drug baron who wants revenge. Typical with Patterson, the prose is simple and quick which makes this an easy and absorbing read. There is nothing too clever, without the twists we can expect from Deaver or Coben, but is enjoyable nevertheless. The ending is very predictable such that you wonder how clever Patterson must be to make a simple story so riveting.
Read more
3 people found this helpful
Report abuse

Mrs. C. A. Harris
4.0 out of 5 stars Gordon Bennett it's Michael again
Reviewed in the United Kingdom on June 27, 2014
Verified Purchase
There is very little I dislike about James Patterson's work. Sometimes I enjoy his collaborations and sometimes not. Michael Bennett is a very readable character, not as charismatic as Alex Cross but there haven't been as many books about Mr. Bennett as yet. The story moves well and, as with all of James Patterson's novels, I find myself hooked early on and then tend to read faster and faster to get to the end, which is quite ridiculous because once it's finished I have to wait until the next book! Well worth reading.
Read more
One person found this helpful
Report abuse

NettieinLondon
5.0 out of 5 stars Great read
Reviewed in the United Kingdom on October 7, 2013
Verified Purchase
Another excellent James Patterson read. As usual, Mr Patterson has us rooting for the good guys whilst waiting to see what atrocity the bad guy will come up with next..! This book certainly didn't disappoint in any area.

I read this in one sitting on holiday and for me it was JP at his best. Great characters all round.

More from the Bennett clan please! Looking forward to the next instalment of this wonderful family (not too far away I hope...?).

All true JP fans will love this. Hope others will too.

Barriet
5.0 out of 5 stars Never disappoints
Reviewed in the United Kingdom on October 21, 2020
Verified Purchase
I have read all the Michael Bennett series of books.
Gone is as good if not better than those that preceded it.
As always, this book was hard to put down.
Read more
Report abuse
See all reviews
Back to top
Get to Know Us
Make Money with Us
Amazon Payment Products
Let Us Help You
EnglishChoose a language for shopping. United StatesChoose a country/region for shopping.
© 1996-2021, Amazon.com, Inc. or its affiliates