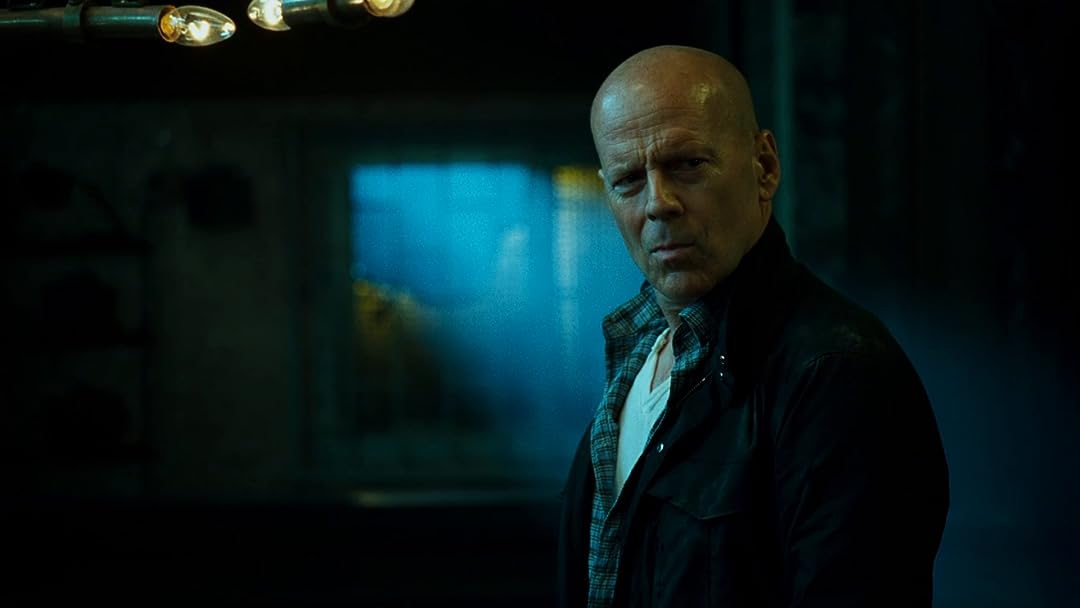 A Good Day to Die Hard

TechJunkieReviewed in the United States on December 20, 2018
1.0 out of 5 stars
Wow... What a let down.
Verified purchase
I love the Die Hard movies. (Well at least the last four I did.) I'm so glad I didn't spend the money to buy this one though. I feel cheated that I actually paid .99 to rent this. I should have been paid to watch this. This story line was terrible, way too over-the-top on the action scenes, characters were completely underdeveloped and the overall movie has the emotional depth of a mud puddle. So many terrible things about this movie I can't begin to describe them here. A huge departure from the Die Hard Series that I've loved over the years. This may be the Die Hard movie that is a "must see" because it's so so poorly executed! Don't waste your money and cherish the last four movies because the series "Died Hard" with this one!!!
18 people found this helpful

joel wingReviewed in the United States on May 18, 2019
4.0 out of 5 stars
Mindless fun in this installment of the Die Hard series
Verified purchase
A Good Day To Die Hard was a worthy addition to the Die Hard franchise. This time things took place in Russia where Bruce Willis as John McClane has to rescue his son Jal Courtney as Jack McClane Jr.

The story revolves around Russian oligarchs Sebastian Koch as Yuri Komarov and Sergei Kolesnikov as Viktor Chagarin. Chagarin wants to force Komarov to reveal some secrets and puts him on trial to do so. Jack McClane is a CIA agent who wants to help Komarov. Together they go to court which turns out to be an escape attempt by Komarov. Jack McClane was supposed to grab Komarov before his own men could get him and then spirit him off to the CIA. Instead, John McClane shows up and everything goes wrong.

That constituted the first half of the film where John thinks he’s helping his son, but he’s actually making things worse. The two were already estranged and that’s what the writers played upon. The second half was when the McClanes came together and tried to take down Komarov.

The movie has some good action scenes which is the heart of the film. John McClane for example drives an SUV on top of a bunch of cars in traffic in downtown Moscow.

By this point in the Die Hard series Good Day To Die Hard was actually pretty good. There’s nothing deep to it. It’s basically a buddy movie with the father and son McClanes but the scenes hold up, and there’s some mindless fun, which is about the best you can expect from this type of movie.
C

Celadon7Reviewed in the United States on July 4, 2018
3.0 out of 5 stars
Digital copy is not the (better) theatrical version
Verified purchase
The digital copy is the extended version of the movie which is supposed to be added scenes. I didn't know they were going to cut my favorite scene of McClane and his daughter. It ties in to the previous movie and there is nice banter as she takes him to the airport. She admonishes him not to make things worse which is funny because you know he is. Instead you just see him exiting a car at the airport and faking two lines of dialogue that were lifted directly from the previous scene. I couldn't really tell where the new scenes were added in on the extended version, although the car chase scenes did seem to go on forever. The DVD was the theatrical version with the original scene intact. I can't speak for the Blu-ray since my player quit working several years ago and I never replaced it because I two other working DVD players. Anyway, I only bought this for the digital copy so I am not happy with the version I got. And while it is definitely the worst of the Die Hard films, it is still Bruce Willis as John McClane and worth watching for that alone.
5 people found this helpful

T-RexReviewed in the United States on May 4, 2019
2.0 out of 5 stars
I wanted to like it, but time for the franchise to die hard
Verified purchase
I like Bruce Willis as an actor, liked the early Die Hard movies, and really wanted to like this one. It has lots of action but demands such a suspension of reality as to have even us die-hard Willis fans wanting the film to end. You'd think with stuff blowing up and car chases all over the heart of Moscow that Russian police might get involved beyond a few scenes where their cars are crash fodder. And don't get me started on how this movie's plot would have likely resulted in an international incident beyond serious. Lots of explosions, gunfire and crashes. Little else to watch for.
5 people found this helpful

Dan JReviewed in the United States on July 15, 2018
5.0 out of 5 stars
John's kids are a lot more like him than they'd ever admit
Verified purchase
There are those way say that the 5th installment of the Die Hard franchise was the worst of them and some would even say it's not deserving to be a part of the franchise, but I look at it differently.

Bruce Willis was 31 when he started filming "Die Hard" and by the time the 4th installment came around he was 48. With the 5th installment he is now 54 years old and although many of us want to see him like he was in Die Hard, clearly that's not possible. He's older, perhaps a little slower both mentally & physically and all his character (John) wanted to do was to reconnect with his son who was on trial for his life in Russia. So initially we think that not only was his daughter estranged to him but now we find out that John Jr. was also estranged. We learn that while Daddy was out kicking butts the children more or less grew up without a father figure. This is something that John Jr. overhead his father say in the movie. While John screwed things up for his son, as time goes on we learn that the son really loves the father and the two of them are off to "save the world".

In this light, A Good Day to Die Hard is fitting to be a part of the franchise. John is human and can't be kicking butts all the time, but he shows he still has what it takes in this film. I read that there may be a Die Hard 6 and that Bruce said will be different from the previous 5. At 62 perhaps he'll be passing the baton. Clearly both of John's kids are more like their father.

So I actually liked the 5th installment. It was different but a nice way to end the franchise if they choose to do so.
5 people found this helpful

R.E.M.Reviewed in the United States on March 30, 2021
2.0 out of 5 stars
Know what you’re getting into
Verified purchase
Pros:
1) explosions
2) Jai Courtney, running, looking hot
Cons:
1) Bruce Willis
2) story, writing: dubious
Now I’m willing to put up with a lot of stuff just to see a hot dude run around while stuff explodes in the background, but I’m pretty sure I won’t be rewatching this.
In summary:
1) Jai Courtney is still hot, and I look forward to seeing him running in front of explosions (but with better writing) in the future.
2) Bruce Willis made this franchise, and now he has killed it. RIP
One person found this helpful

Christopher HausmannReviewed in the United States on December 22, 2018
1.0 out of 5 stars
Action fun!
Verified purchase
Had to have it in my collection! The main reason for the star subtraction is for Amazon not the movie!!!I just wish that Amazine would let me custom arrange my Video Library instead of only offering by date purchased or alphabetical order. I would prefer to arrange by genre, episode, number in franchise so that I could group my movies together instead of having a hodge podge to sort through!
2 people found this helpful

EmmaReviewed in the United States on December 27, 2020
2.0 out of 5 stars
2 stars for a movie that only had one.
Verified purchase
Unlike the other Die Hard movies, this one was more like how I'd imagine an overdose on sleeping pills. Most of the stuff done here has been done in other movies starring Bruce Willis.. Better. As a family of fans, we all felt a little disappointed after renting this. We attribute this to the writers, just to be clear.
I actually thought I had dreamed watching this movie, but here it is. *sigh*
See all reviews
Back to top
Get to Know Us
Make Money with Us
Amazon Payment Products
Let Us Help You
EnglishChoose a language for shopping. United StatesChoose a country/region for shopping.
© 1996-2022, Amazon.com, Inc. or its affiliates