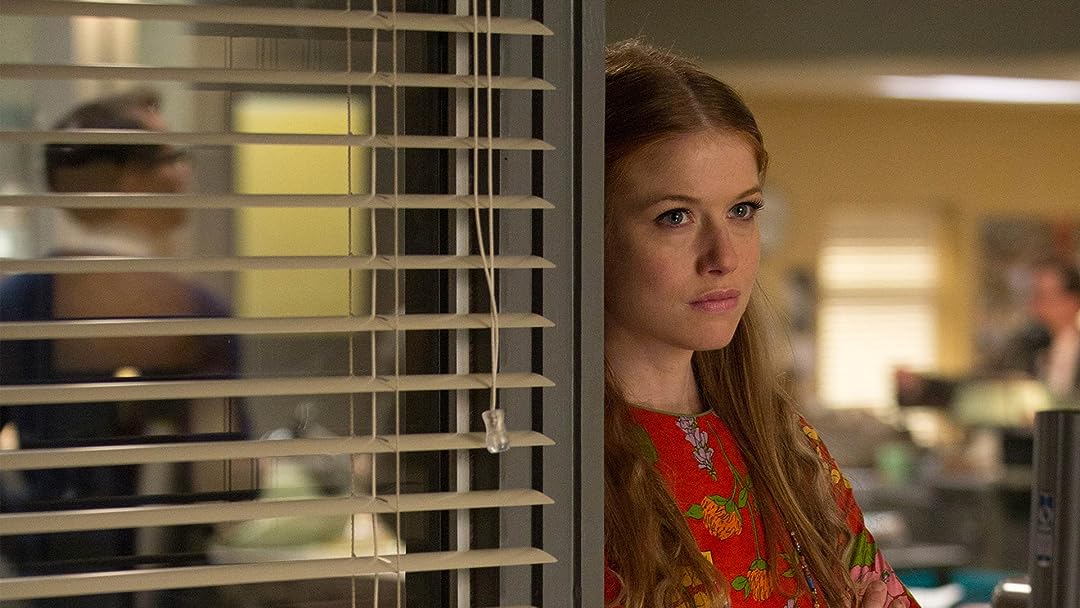 Season 1
(29,260)
8.22016X-RayHDRUHD18+
In 1969, while a cultural revolution swept through the free world, there was still one place that refused to change with the times: newsrooms. Good Girls Revolt follows a group of young female researchers at "News of the Week," who ask to be treated fairly. Their revolutionary request sparks convulsive changes and upends marriages, careers, sex lives, love lives, and friendships.

K. TannerReviewed in the United States on December 5, 2016
5.0 out of 5 stars
Excellent show deserves second season!
Verified purchase
Just found out you canceled Good Girls Revolt. I am extremely disappointed! This was a highly original show with excellent acting and writing. Instead of paying big stars (Billy Bob Thornton) to do crappy shows (Goliath) pay to keep shows like Good Girls Revolt on air. They're actually interesting and teach things about our society. Then again this goes to prove you'd rather pay men to make bad shows than pay women to make entertaining and insightful shows that mean things to people! Really hope Netflix or another streaming service picks it up and gives it the attention it deserves.
1875 people found this helpful

Carole M. CarpReviewed in the United States on December 16, 2016
4.0 out of 5 stars
Good Girls Revolt Must Be Renewed!
Verified purchase
Rumors abound that Good Girls Revolt will not be renewed for a second season which I see as a huge mistake and an even huger disappointment. Not only did I enjoy the heck out of it, I also believe it's a considerable contribution to women's herstory. The series takes place during the years that women's fight for equality was getting a renewed kick start thanks to progressive, powerful leaders like Gloria Steinem, Betty Friedan, Germaine Greer and others. The specific setting is the editorial offices of a weekly magazine, much like Newsweek or Time, where sexism is rife and women cannot be writers or editors, allowed to serve only as research assistants, copy readers and runners. The episodes deal not only with the women's fight to gain traction professionally, but also with their growing understanding that the yoke of sexism is tainting their personal lives as well. The scripts are interesting, entertaining and way beyond the superficial. The craftspeople (costumes, makeup, hair, set design, etc.) perfectly set the milieu. And the actors are splendid, subtly but clearly depicting their disappointments and their courageous rebellion (the women) and their resistance to change (the men). My favorite story line is Finn and Patty. There's a scene in the last episode with Finn and Patty standing in front of a candy machine that is absolutely priceless. See it and see if you agree that this is a series that must be renewed.
728 people found this helpful

Kera BReviewed in the United States on December 6, 2016
5.0 out of 5 stars
Amazon failed when they canceled this show! I love it!
Verified purchase
This show is absolutely wonderful. I watched it in 2 days and got a few of my friends on it also. While looking it up last night I found out they decided to cancel this show and was completely devistated. How? Why? This show is great and teaches you alot about 1969-1970. Being a 32 year old female I often take for granted what we as women have and are able to do and this show puts it all into perspective. It shows all the trials and tribulations that a young woman had to put up with and what they did to try and change the situation. It follows several completely different characters with completely different types of lives and shows how they all start to come into their own as well as band together for the common goal...womens rights. This is a show that Amazon should NOT have canceled. How do you have 4.7 stars out of nearly 16k reviews and choose to cancel it when there are so many other shows that are NOT as good.
Come to find out... it was canceled because a MAN didn't like it. He obviously doesnt care what his customers and women think. YOu can read all about it on Forbes website. Everyone else loved it, HE didn't..
They are hoping another network will pick it up. I'll be crossing my fingers!! #SaveGoodGirlsRevolt

DoloresReviewed in the United States on December 22, 2016
5.0 out of 5 stars
The Show MUST go on!
Verified purchase
Intelligent, well written and thought provoking as well as FUN to watch. PLEASE - this show needs to continue. Amazon, are you listening???? Look at the reviews! Don't let a show of this caliber die an early death!
546 people found this helpful

JenReviewed in the United States on December 27, 2016
5.0 out of 5 stars
Amazon cancels highly acclaimed show because it shows women fighting for equal rights
Verified purchase
AMAZON EXECUTIVES CANCELLED THIS SHOW WITHOUT WATCHING IT.
I am considering discontinuing my amazon prime account and never ordering from amazon again.
Amazon, if you can't even keep a critically acclaimed, highly rated show online you don't deserve my business.
992 people found this helpful

ROZmReviewed in the United States on October 31, 2016
5.0 out of 5 stars
FABULOUS & TRUE: I LIVED THRU IT. MORE STORIES ABOUT WOMEN'S BATTLES NEED TO BE TOLD!!!
Verified purchase
FABULOUS AND TRUE. SEASON 2 CANT COME SOON ENUF!!!!!! As a woman, I was "liberated" a couple years before this story begins in 1969. As an anti-war activist, the men took all the credit while the women did most of the work..and were, except for a few, were not mentioned in the history of the times. But I lived thru this period. As an insurance claims adjuster, I did similar work as the men, often given the most complicated cases, and got paid less than 1/3 what they were paid. I had to have a college degree...the men did not . Even into the 1980s after I became an excellent computer programmer and top flight systems analyst. THEY WOULDN'T pay me the same as the men because they, I was told flat out, had families to raise and I didn't. My computer programs, for the largest bank in New York State, NEVER failed in production...NOT ONCE!!! But I was regularly called in, even in the dead of night, even once on New Year's Eve to fix the programs the men wrote that failed in production. But they still paid me a lot less than the men. As the state coordinator and therefore one of the founders of the Green Party of California in the 1990s, I and all the other women but one were written out its history. This series is so right on!!! Congratulations on telling the truth. I hope this generation of women and next understand all WE have done up to now to get what we should have. I hope this generation and the next understands there is still a fight, a war to be won for women to have full equality...as well as people of color and indigenous peoples.
821 people found this helpful

Melissa LudtkeReviewed in the United States on November 6, 2015
5.0 out of 5 stars
I lived this story. Well told! Eager for more episodes.
Verified purchase
Can't wait for the next segment of this story! I lived these experiences at Time magazine, and prior to that at Sports Illustrated when I was a researcher/reporter just a few years after "Good Girls Revolt" takes place. Wow! Its characters are spot on in spotlighting many of the conventional gender roles and responsibilities, even if a few scenes are a tad bit exaggerated. Perhaps the only way of making this story an effective vehicle to bring those who weren't in newsrooms in those years into the ambiance we experienced back then. Eager to see these characters grow and change as the women push for change, as we know they will. Great to see this long overdue story being told. Onward!
949 people found this helpful

Jake n BakeReviewed in the United States on December 27, 2016
4.0 out of 5 stars
Can we revolt against the cancelling of this show?
Verified purchase
I loved this because I lived this, working for a large national organization in D.C. in 1970-71. The clothes, the hair, the sets all caught the ambiance of the time. I am extremely disappointed that this hasn't been picked up for a second season. Like the big lips on the magazine cover, that decision was probably made without feedback from the women who love this show, or else that feedback was ignored. I would have given this 5 stars but the graphic, gratuitous sex was a distraction from the story. It was like the director was saying, "Look at how artistically I can shoot these sex scenes." which was just an excuse to get the actors to take their clothes off - as often as possible. But look how far we've come, Sisters! Instead of making a third of what men make, we're now making 60-72% of what they make! Even though the law passed in 1964 makes this illegal - still. Patty, Cindy, Jane, Denise, et. al. you will be missed.
109 people found this helpful
See all reviews
Back to top
Get to Know Us
Make Money with Us
Amazon Payment Products
Let Us Help You
EnglishChoose a language for shopping. United StatesChoose a country/region for shopping.
© 1996-2021, Amazon.com, Inc. or its affiliates