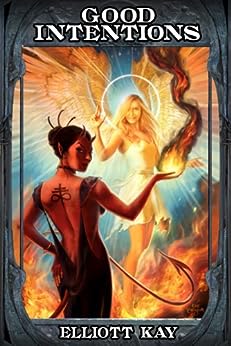 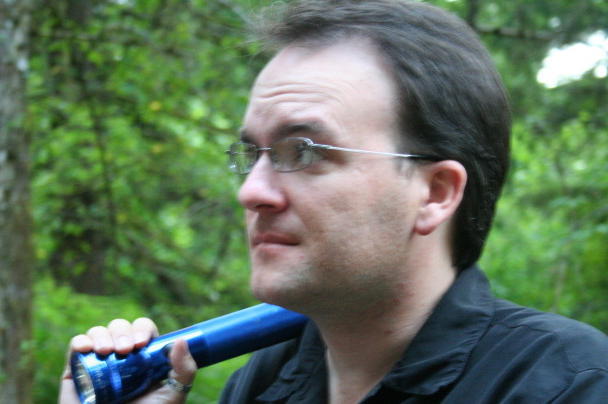 by Elliott Kay (Author) Format: Kindle Edition
Book 1 of 4: Good Intentions
See all formats and editions
Sorry, there was a problem loading this page. Try again.
He knew it was a dumb stunt from the start. A midnight run through a cemetery to impress a couple of girls isn't the stuff of legend, but Alex Carlisle longs to escape the crushing mediocrity of life after high school.

Then he stumbles upon the ritual, and the cultists, and two bound and bloodied women. Alex intervenes and the ritual blows up in his face, leaving him bound to them both: Rachel and Lorelei, an angel and a succubus. It’s hardly the sort of challenge a guy can face with dignity when he still lives at home with his mom.

Alex never imagined falling for an immortal demon seductress, or that he’d spend his nights dodging her co-workers, her old boss, and every other supernatural freak in Seattle. He never thought a woman like Lorelei could have a rival like Rachel, either. But then, nobody ever said adulthood would be easy.

Audible Holiday Deal
Join Audible Premium Plus for 60% off. Only $5.95 a month for the first 3 months. Get this deal
Books In This Series (4 Books)
Complete Series
Good Intentions
Kindle Edition
Page 1 of 1Start OverPage 1 of 1
Previous page
Next page

Elliott Kay grew up in Los Angeles and currently resides in Seattle, Washington. He has a bachelor’s degree in history and is a former member of the US Coast Guard. Kay has survived a motorcycle crash, severe seasickness, summers in Phoenix, and winters in Seattle.

Elliott Kay is the author of "Poor Man's Fight," "Good Intentions" and "Natural Consequences." Keep an eye on his blog at elliottkay.com or follow @ElliottKaybooks on Twitter!

4.4 out of 5 stars
4.4 out of 5
745 global ratings
How are ratings calculated?
To calculate the overall star rating and percentage breakdown by star, we don’t use a simple average. Instead, our system considers things like how recent a review is and if the reviewer bought the item on Amazon. It also analyzes reviews to verify trustworthiness.
Top reviews

Gilbert M. Stack
VINE VOICE
5.0 out of 5 stars Well-Developed Fascinating Characters!
Reviewed in the United States on October 31, 2017
Verified Purchase
One of the first things you’ll notice about the novel, Good Intentions by Elliott Kay, is that there is a lot of sex in these pages. By a lot, I mean something like 30% of the book (maybe more) revolves around steamy action and the contemplation of steamy action. Usually when this happens in a novel I find myself skimming pages trying to get back to the plot, yet in this case, the sex actually is instrumental to the story.

Good Intentions is about a young college student named Alex who stumbles upon a weird crime while he is taking photographs for an art class in a cemetery in the middle of the night. Three men have brutalized and are about to start raping two women. Alex steps in to help them without realizing that the situation is much worse than he understands it to be. In the world of Good Intentions, magic is real and the would-be rapists are trying to bind an angel and a succubus to them through their black arts. Alex, thanks to his interference, accidentally receives the mystic bonds to the supernatural women.

Then things get weird. Rachel is a foul-mouthed angel looking to fight much more aggressively against the hordes of evil than the heavenly host currently favors. Lorelei is a three thousand year old evil temptress who is quite relieved to no longer be bound to her dark master. Alex is a basically good guy with a past that proves to be much more complicated than it would first appear. The binding of these three beings subtly changes the balance of supernatural power in the Seattle area and leads them and Alex’s friends into a salvation-or-damnation level fight with the local supernatural community.

What raises this book to five star quality is the excellent character development and the slow and credible character growth, especially of the succubus, Lorelei. It sneaks up on you, but the book is worth reading for that aspect of it alone. Add in the hard-driving action, excellent supporting cast, fantastic surprises and general high quality of the writing and you have a book that will make you very happy there are sequels waiting to be read.
Read more
25 people found this helpful
Helpful
Report abuse

Grant Reed
4.0 out of 5 stars A Guilty pleasure
Reviewed in the United States on April 16, 2019
Verified Purchase
I thought Good Intentions was an excellent book. However, it is a book that is akin to listening to Aqua or Spice Girls, or maybe like watching the Batman series from the 1960s; You may enjoy it, but you may not want your friends to know you are doing so.

The most important thing I can say to a potential reader is read the Warning first. It is pretty accurate, but at the same time, it is what got me to want to read the book. The second most important thing I can say is this has a lot of sex in it. I'm not going to say 30% as another reviewer said, because I am not sure if it is that high, however it is frequent, it is an important part of the story, and some people may be offended by it.

This story is pretty much a young man's dream. The protagonist, Alex, is a good guy, that at the start of the story just has never been lucky with his dating life. He lives with his mother, alone, and is just going to college. He has had friends that were girls that never developed into a romantic relationship, and he has three very close friends that are males. Then, something happens, and Alex, ever the good guy, stumbles forth with good intentions. He stops a sacrifice by a mad sorcerer, and the consequences fall on him. And I guess it is not a spoiler to say the victims of the sacrifice were to be an angel and a succubus, as they appear on the front cover.

These consequences completely change his life, and he is propelled into a world of fantasy and desire, action and adventure, and challenges he would not have expected. With him are his best friends, Drew, Wade, and Jason. Along the way he picks up more friends and allies, but it comes back to him being a good guy.

Almost all of Alex's friends are strong supporting characters with believable backgrounds and some unexpected skills. The story is part comedy, part romance/erotic romance, and part adventure.

While I can't agree with a lot of positions in this book, I enjoyed it immensely enjoyed this book. I also thought the follow up books "Natural Consequences" and "Personal Demons" were entertaining as well.
Read more
7 people found this helpful
Helpful
Report abuse

T. Jones
1.0 out of 5 stars You have a terrible head-hopping problem, author.
Reviewed in the United States on September 10, 2020
Verified Purchase
Laughing because I just read a book with a fair bit of head-hopping, and here is another one!

Aaaand, DNF at 7%, for that very reason but x1000. This is awful, when the premise had such promise. Plus, the snarky angel left, and that removed the dynamic I enjoyed the most. We started off in Alex's head entirely, but ever after the reader has NO IDEA who each sentence belongs to. It's disruptive and destroys immersion and connection to a character. Terrible, lazy habit, head-hopping. If you write, this is a great example of why you avoid this particular beginner mistake.

I don't care if this is, perhaps, just how the author writes. I care about my own experience and thus won't read anything else by Elliot Kay.
Read more
3 people found this helpful
Helpful
Report abuse

MR. E
3.0 out of 5 stars ⚠ Well written but gets preachy about free "love."
Reviewed in the United States on July 8, 2021
Verified Purchase
The world is interesting if somewhat frustrating and cynical at times. The unique take on a the supernatural is fascinating. The action is decent enough and the character development is surprisingly well rounded considering...

With that said this book and its sequels get preachy. The story begins spending more and more effort trying to trumpet the virtues of completley open relationships and "getting your fun where you can"; especially in the second book (as far as I could get so far but with every indication that it will just get worse). Most of the professing of love between the protagonist and his love interests involve them telling him to sleep around and, eventually, to let them sleep around; and how heaven has no problem with it.

And so I've dropped the series and wanted to warn anyone who cares that that appears to be the central tennet of the books.
Read more
One person found this helpful
Helpful
Report abuse
See all reviews

Paprika
5.0 out of 5 stars Devilishly good read
Reviewed in the United Kingdom on May 13, 2014
Verified Purchase
Corny review title but what the heck !

This book seriously outshines the vast majority of twiglet-style fiction out there. The characters are thoroughly likeable without becoming two dimensional parodies and develop over the course of the book, the humour is very evident in a dry and often caustic way, the sex (of which there is copious quantity of) is handled remarkably well and avoids falling in any unpleasant directions.

Excellent book, have grabbed the follow-up volume, which hopefully will be as much fun.

Also I challenge anyone to not seriously laugh out loud at some of the comments Rachel comes out with in the book ! Lorelei may get most of the action but Rachel gets the best lines !
Read more
2 people found this helpful
Report abuse

Dr. John Chapman
5.0 out of 5 stars Succubi and demons and angels; oh my!
Reviewed in the United Kingdom on April 3, 2015
Verified Purchase
Warning; LOTS of sex. More than in the Thaumaturgy books which share some other similar themes; both feature succubi as leading characters for example. However- engaging, well written by the standards of the genre and entertaining enough that I've bought the next in the series.
Read more
Report abuse