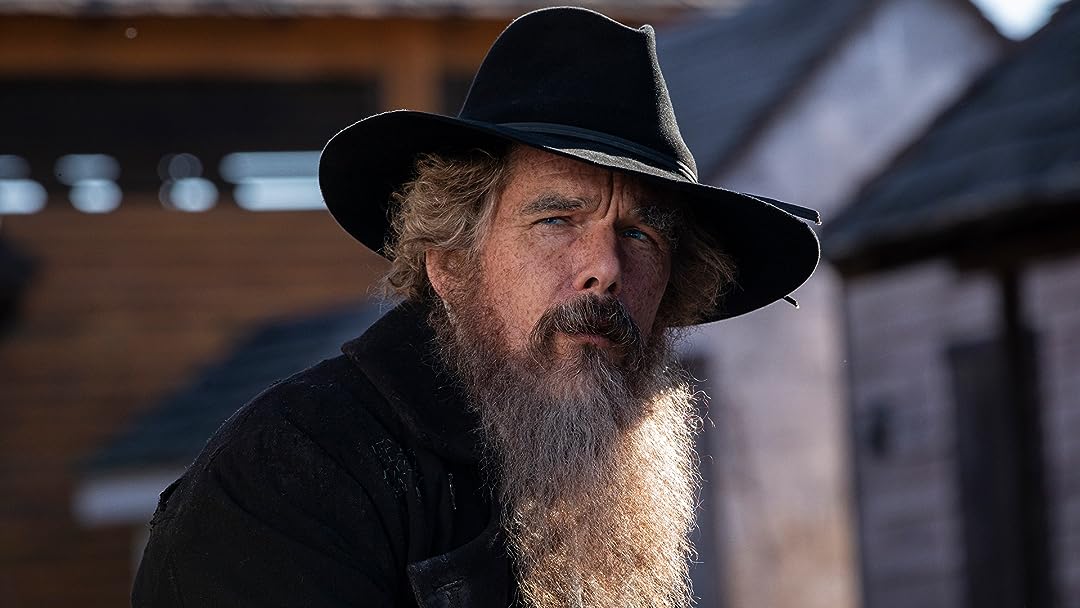 Paul AllaerReviewed in the United States on October 5, 2020
4.0 out of 5 stars
Intriguing opening episode of the Showtime mini-series
"The Good Lord Bird" (2020 release; 8 episodes of about 55-60 min. each) brings the story of abolitionist John Brown. As Episode 1 opens, we are reminded that "All Of This Is True. Most Of It Happened." The opening scenes show Brown about to be hung for reasons we don't know yet. We then go back in time to "Bleeding Kansas 1858", and we get to know Brown, as he is confronted by Dutch Henry over Brown's "outrageous" statements about slavery: "We are at war with slavery!" Brown contends. Brown ends up "stealing" a slave, a boy who gets the nickname "Little Onion" from Brown's cohorts... At this point we are 10 min. into Episode 1, but to tell you more of the plot would spoil your viewing experience, you'll just have to see for yourself how it all plays out.

Couple of comments: the mini-series is based on the 2013 novel of the same name by James McBride. I have not read the book, so I can't comment on how closely the series sticks to the book. This is a the labor of love rom Ethan Hawke, who not only stars as John Brown, but he also co-wrote the script and co-produced this. Hawke seemingly only gets better as he is getting older, and his shadow looms very large in this mini-series, to great effect. The parallels with what is going on in this country today are undeniable. "We don't ride for revenge, we ride for justice", Brown says at tome point. Change the word "ride" with "march", and this is exactly what the current Black Lives Matter movement is doing. The production sets in this mini-series are tops, and it is clear no money was spared. If there is one criticism, it's that we don't really know why Brown ended up being an abolitionist. Perhaps that will be explained in later episodes?

"The Good Lord Bird" premiered on Showtime this weekend is now streaming on SHO On Demand and other platforms. New episodes air Sunday evening at 9 pm Eastern. If you have an interest in the pre-Civil War days of this country, I'd readily suggest you check this out and draw your own conclusion.

justin barnettReviewed in the United States on December 23, 2020
5.0 out of 5 stars
Just a fantastic show.
Verified purchase
This is a work of fiction meets autobiography. It is a fantastic, exciting and important work of art. The character of Onion is crucial to have an outsider's perspective on one of the most interesting figures in American history in John Brown. Ethan Hawke has never been better! He makes John Brown sort of a modern day Don Quixote with real life implications. This is a very timely series. I can't recommend this series enough.
12 people found this helpful

CRM BrooklineReviewed in the United States on October 5, 2020
5.0 out of 5 stars
Powerful story, and true. Ethan Hawke is magnificent.
A beautiful rendition of the scary, exciting and truthful story of John Brown, the violent abolitionist. It has a certain Hollywood gloss, but makes for wonderful tv/streaming. At times horrifying, at times beautiful, and held together throughout by Ethan Hawke's intense and billiant portrayal. (He also produced and help write the show.)
(As an aside, Ethan Hawke has developed into one of the great actors of his generation. See him in "First Reformed'.)
39 people found this helpful

DonnaMarie113Reviewed in the United States on January 29, 2021
2.0 out of 5 stars
Onion Makes Story Even More Preposterous
Verified purchase
I purchased series because a friend wanted to watch it. While watching the first episode, I thought it was a comedy. SADLY, IT WASN'T.
It's not a fictionally accurate rendition particularly of how black and white people interacted in society in that time period.
And if nobody EXCEPT ONE WOMAN was able to figure out the guy wearing a dress wasn't female...
I'm making my friend pay for the whole series because it is such a horribly made series that cannot be taken seriously.
4 people found this helpful

rojobyerlyReviewed in the United States on February 11, 2021
5.0 out of 5 stars
Amazing series
Verified purchase
Amazing actors. Amazing series based on the novel by James McBride & loosely based on life & times of abolitionist, John Brown. I watch very few things multiple times, and this will be one.
6 people found this helpful

Michael NelsonReviewed in the United States on March 7, 2021
5.0 out of 5 stars
I'm a fan of both!
Verified purchase
I liked it because it's about John Brown whom I have great admiration for. Along with "Captain my Captain", Ethan Hawke, who stole my heart in Dead Poets Society. I am now a fan of Joshua Caleb Johnson! A once in a lifetime performance! I would like to have seen more of the way John Brown handled Congress and his thinking, but this series was very thorough and thought-provoking.
4 people found this helpful

cduboiseReviewed in the United States on March 17, 2021
5.0 out of 5 stars
Terrific! An off-beat story about John Brown and Harpers Ferry
Verified purchase
This is not a bio-pic.
It's a highly-entertaining story told by a fictional former slave teenager.
The words that open each episode are, "All this is true. Some of it happened."
A great script, wonderful actors and good music - tells the gripping story of the abolitionist John Brown.
It's the best movie/series of 2020.
4 people found this helpful

FaidaReviewed in the United States on July 29, 2021
4.0 out of 5 stars
I know the story
Verified purchase
I really wanted to see a good depiction of John Brown. This movie version was well done but it could have been better. I didn't particularly like the Portrayal of Frederick Douglass, a black leader of the abolitionist movement. It is true that he had a black wife who blessed him with children and according to history she died and he later married a white abolitionist from MA. Anyway, the movie is worth watching.
One person found this helpful
See all reviews
Back to top
Get to Know Us
Make Money with Us
Amazon Payment Products
Let Us Help You
EnglishChoose a language for shopping. United StatesChoose a country/region for shopping.
© 1996-2022, Amazon.com, Inc. or its affiliates