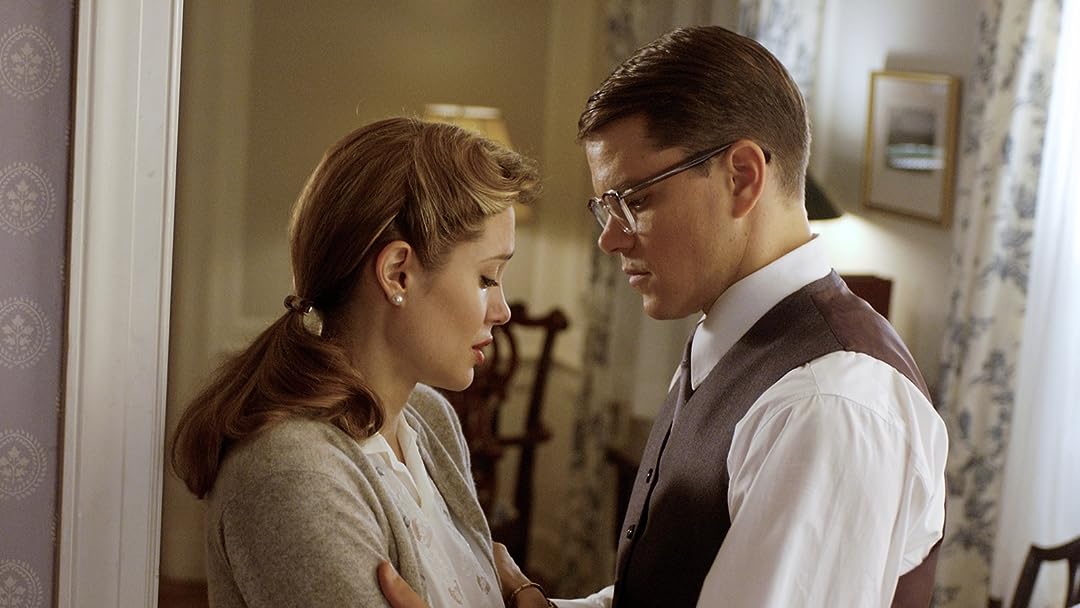 Michael J.Reviewed in the United States on October 17, 2018
5.0 out of 5 stars
masterful
Verified purchase
This movie was made by people, actors, directors, producers and all the rest, who were secure enough in their fame and fortunes to not succumb to Hollywood pressure to make a shallow, fast paced action flick to keep a mindless audience from boredom.
It probably helps to be either old enough to remember back to the Bay of Pigs,and the Cuban missile crises, or have studied the history of the Cold War. This movie portrays the life of espionage and intelligence as it most likely really is; boring, humdrum work with deadly consequences that requires brains, resolve and nerves of steel. This isn't Mat Damon playing at being a character who can over and over again escape certain death and walk out of explosions unscathed. This is showing how it really might be.
It is a long movie. It unfolds at it's own pace. You have to pay attention to all of the dialog and wait until the end in order to fully understand it. It is certainly worth the time to watch it. It also uncovers how white, privileged, Anglo-Saxon men controlled the fate of the world for decades.

Crow-ConspiratorReviewed in the United States on October 9, 2018
5.0 out of 5 stars
Slow, Dark, Melancholy: the Human Toll of Keeping the Nation's Secrets
Verified purchase
Matt Damon's flat line performance under Robert de Niro's able direction is emblematic of this film. He hardly has ten minutes of dialogue it seems. He's a tortured sphinx. Some found it boring, I found it engrossing. I thought the score was wonderful. Who can you trust? No one. It's about the toll of keeping secrets of different kinds, and the film keeps returning to the biggest secret of all: why the Bay of Pigs invasion failed. Secrets interweave. Those who trust you must sometimes be betrayed. Sometimes enemies can be friends and friends can be enemies, as one character says. Don't expect a typical spy movie with gunfire and a lot of spy craft. This is a unique psychological thriller about the cost of choosing to keep your country's secrets over the good of those closest to you.
23 people found this helpful

GroovykarmaReviewed in the United States on September 20, 2018
1.0 out of 5 stars
Could have been a good movie
Verified purchase
I had so many issues trying to watch this. Poorly directed, fell flat, going back and forth on a time line. If they had started,at the beginning and gone in chronological order it would have helped. Too much left to imagination.
I felt that they under utilized a cast of wonderful actors, then left us wondering what the actor was thinking. Should have taken license to round outg the characters. They were one dimensional and boring.
I kept hoping it would get better. It is a movie I will completely forget about in 24 hours so it is a waste of time. Does not move or affect me, nor did I learn anything.
Unanswered questions and left hanging. Did he order the girl killed? What favor does he have to do ?
Disappointing and great actors didn't sway me

qajaqrReviewed in the United States on November 15, 2018
4.0 out of 5 stars
If you like films...
Verified purchase
... that are nothing more than mindless entertainment, you should probably not put any time into this one. If you are looking for a laff-riot this isn't it. Fireballs that cover the screen? Ear-splitting explosions that will cause you to rip the buds out? 30 minute car chases through downtown? Way-too-cool heroes with an assault rifle in one hand and the Hollywood babe of the month in the other? Nah. This is just a spy movie for above average spy movie fans.
It's a movie about spies that have the human condition. It's about spies that never saw it coming. It's about spies lying to other spies. It's about spies that thought they could juggle job and family. It's about spies that thought there may be some decency in the spy business. It's about spies that thought spies could be friends.
This film is very well cast, lots of A list names, the directing is good, particularly in the character full frames, the editing is notable as much for the things shown as the things not, the lighting is as good as can be in the settings and what the era lights would have permitted and the sound is generally good, but a couple of character's important one-liners I had to replay, though I still didn't get one of them.
To get everything the producers and director wanted to get across, you'll need to pay attention. And you'll need to understand that anyone removing their clothes at the wrong time and with the wrong person will many times invoke the Law of Unintended Consequences.
12 people found this helpful

Crazy SvenReviewed in the United States on January 11, 2017
5.0 out of 5 stars
Burn After Reading
Verified purchase
How could I have missed this one? Beginning with an all star cast, "The Good Shepherd" goes way beyond its simple title and cover. The narrative about the life and times of one of the founding members of the CIA plays out in two separate timelines, one beginning at the brink of WWII and the other as the Bay of Pigs invasion plays itself out. The earlier timeline catches up to the secondary at around three quarters into the film and it is done in a way that both work together in a synchronous way, right up to the gripping finish. To sum it up, it is a mixture of U.S. and Soviet intrigue from the very beginning of WWII, on to the start of the Cold War and through to the period of the Cuban Missile Crisis, although it stops just short of that last event. The film may not have a great deal of the violence some younger viewers seem to crave today, but it does contain plenty of other gristle, including covert US and UK partnerships during WWII, the MK-Ultra program, the CIA-Mafia connection (played well by Joe Pesci as usual), CIA and Russian assassinations, the Skull and Bones society, "old school" espionage techniques and excellent period reenactments of the private and social lives of the elite in each period. All of this happens while the people involved try to maintain family lives, friendships and allegiances. Matt Damon plays a curiously similar character to the one he played in the Talented Mr. Ripley. This is the best film I've watched in months.
60 people found this helpful

joel wingReviewed in the United States on June 27, 2021
4.0 out of 5 stars
American John Le Carre spy story
Verified purchase
The Good Shepherd plays out like a John Le Carre spy thriller. That means the story is very nuanced and the plot is very slow moving. It features Matt Damon in two story lines. The first, how he became a spy on the eve of World War II and then when he was a CIA officer and had to investigate the failure of the 1961 Bay of Pigs invasion of Cuba. Included in that is a human side as Damon’s job takes a toll on his wife Angelina Jolie and their son. That points to the transformation his character went through which is shown in the two plot lines. It also highlights the WASP (White Anglo-Saxon Protestant) establishment from Yale to the Skull and Cross Bones that dominated American society and politics at the time. For instance, when Damon is recruited into the Office of Strategic Services (OSS) which would become the CIA by Robert De Niro he says that the government is looking for “the right people meaning no Jews, no Negros and very few Catholics.”

Michael Gambon really stands out as a man who stuck by his convictions and knew what a dirty game espionage was.

The Le Carre feel is shown in reoccurring scenes like Damon and analysts going over the minute details of a picture and recording they received. It shows spy tradecraft but it is extremely slow going. Damon also has his KGB rival just like in a Le Carre novel such as Tinker Tailor Soldier Spy.

PauliGMacReviewed in the United States on June 24, 2022
2.0 out of 5 stars
"History is written by those who have hanged heroes" ...
Verified purchase
Just more propaganda from the global Cabal, starring British & Ashkenazi elites. The CIA was created by the Vatican World Bank, formerly "Lucifer Trust", later "Lucis Trust", and "Russell Trust". It, like the FED, is neither federal nor founded by America. The "Skull&Bonesmen", are just the new "Pirates"... replacing the old Pirates who were sent out to steal the world's gold for the Crown. Commissioned by the "East India Trading Co", now known as the World Trade Federation. Skull&Bonesmen are also known as "Russel Trust" agents. Groomed to control, not just America, but to establish a Rothschild/Central Bank in every country. Usually by means of staging a color revolution to overthrow any leader and install their own puppets. As Obama/Biden/Hillary did in Ukraine, years ago.
In this movie they portray the CIA as anti-communist, but they are globalist neocons who have the same end goal. Global communism under an Israeli/Ashkenazi/Khazarian Mafia oligarchy via the W.E.F/W.H.O./U.N./NATO. They used Covid lockdowns to collapse the economy to install Gate's digital$ as the "New One World" currency basket, aka the MARK (patent # 020202-060606). Here in the U.S. and in the E.U. they've shut down oil production to bring in the "Green New Deal", which will collapse all societies across the globe. Billions will die from the deadly enforced JABB or starve... or accept the MARK.
In opposition... the "Alliance" is pushing devolution as well, but to bring about global peace with a gold-backed quantum system, under the watch of Project Odin, aka QFS and or GESARA/NESARA.
Last month Russia, China, India, and five other countries (over half of the world's population) all switched to the QFS. Days later Saudi Arabia stopped accepting the US fiat/fake "petrol dollar". America is now watching it's value drop as quick as this illegitimate admin is printing more than ever in our history.
EXPECT food & fuel riots by the end of summer.

sandyReviewed in the United States on April 24, 2022
4.0 out of 5 stars
Accurately depicted spy movie **spoiler alert
Verified purchase
The movie shows many facets of the spy trade, centering on betrayals and never being able to trust anyone—and the ultimate loneliness of being a spy. Matt Damon’s character makes the hard choice of marrying the beautiful woman he had sex with once, instead of the woman who truly could have made him happy. He does “the right thing” by marrying Angelina‘s character after her brother tells him she is pregnant, but you wonder if that was a set up by her – she obviously wasn’t a virgin and her almost frenzied seduction of Matt Damon’s character seems to imply that she was already pregnant, and knew it. The torture and subsequent suicide of an innocent man seemed accurate and sad, and makes you hope that information gathering and veracity testing has evolved since the 50s, when this incident took place. In the end, Matt Damon‘s character makes the hard, but correct, choice of having his son’s soon to be wife killed before the wedding, after finding out she is a Russian spy. The overall story was of a man dedicated to serving his country at the cost of his own happiness, as well as his family’s.
See all reviews
Back to top
Get to Know Us
Make Money with Us
Amazon Payment Products
Let Us Help You
EnglishChoose a language for shopping. United StatesChoose a country/region for shopping.
© 1996-2022, Amazon.com, Inc. or its affiliates